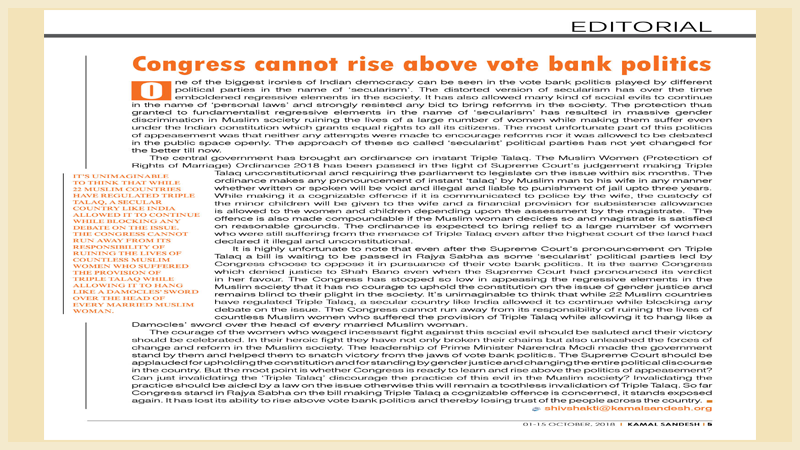 One of the biggest ironies of Indian democracy can be seen in the vote bank politics played by different political parties in the name of ‘secularism’. The distorted version of secularism has over the time emboldened regressive elements in the society. It has also allowed many kind of social evils to continue in the name of ‘personal laws’ and strongly resisted any bid to bring reforms in the society. The protection thus granted to fundamentalist regressive elements in the name of ‘secularism’ has resulted in massive gender discrimination in Muslim society ruining the lives of a large number of women while making them suffer even under the Indian constitution which grants equal rights to all its citizens. The most unfortunate part of this politics of appeasement was that neither any attempts were made to encourage reforms nor it was allowed to be debated in the public space openly. The approach of these so called ‘secularist’ political parties has not yet changed for the better till now.

The central government has brought an ordinance on instant Triple Talaq. The Muslim Women (Protection of Rights of Marriage) Ordinance 2018 has been passed in the light of Supreme Court’s judgement making Triple Talaq unconstitutional and requiring the parliament to legislate on the issue within six months. The ordinance makes any pronouncement of instant ‘talaq’ by Muslim man to his wife in any manner whether written or spoken will be void and illegal and liable to punishment of jail upto three years. While making it a cognizable offence if it is communicated to police by the wife, the custody of the minor children will be given to the wife and a financial provision for subsistence allowance is allowed to the women and children depending upon the assessment by the magistrate. The offence is also made compoundable if the Muslim woman decides so and magistrate is satisfied on reasonable grounds. The ordinance is expected to bring relief to a large number of women who were still suffering from the menace of Triple Talaq even after the highest court of the land had declared it illegal and unconstitutional.

It is highly unfortunate to note that even after the Supreme Court’s pronouncement on Triple Talaq a bill is waiting to be passed in Rajya Sabha as some ‘secularist’ political parties led by Congress choose to oppose it in pursuance of their vote bank politics. It is the same Congress which denied justice to Shah Bano even when the Supreme Court had pronounced its verdict in her favour. The Congress has stooped so low in appeasing the regressive elements in the Muslim society that it has no courage to uphold the constitution on the issue of gender justice and remains blind to their plight in the society. It’s unimaginable to think that while 22 Muslim countries have regulated Triple Talaq, a secular country like India allowed it to continue while blocking any debate on the issue. The Congress cannot run away from its responsibility of ruining the lives of countless Muslim women who suffered the provision of Triple Talaq while allowing it to hang like a Damocles’ sword over the head of every married Muslim woman.

The courage of the women who waged incessant fight against this social evil should be saluted and their victory should be celebrated. In their heroic fight they have not only broken their chains but also unleashed the forces of change and reform in the Muslim society. The leadership of Prime Minister Narendra Modi made the government stand by them and helped them to snatch victory from the jaws of vote bank politics. The Supreme Court should be applauded for upholding the constitution and for standing by gender justice and changing the entire political discourse in the country. But the moot point is whether Congress is ready to learn and rise above the politics of appeasement? Can just invalidating the ‘Triple Talaq’ discourage the practice of this evil in the Muslim society? Invalidating the practice should be aided by a law on the issue otherwise this will remain a toothless invalidation of Triple Talaq. So far Congress stand in Rajya Sabha on the bill making Triple Talaq a cognizable offence is concerned, it stands exposed again. It has lost its ability to rise above vote bank politics and thereby losing trust of the people across the country.