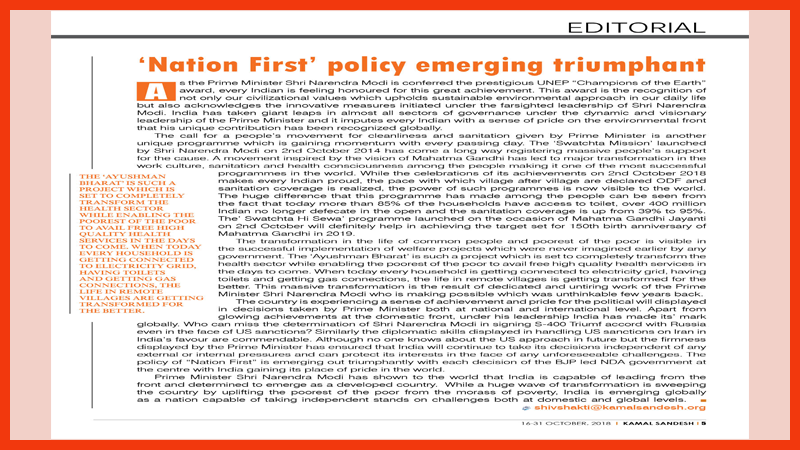 As the Prime Minister Shri Narendra Modi is conferred the prestigious UNEP “Champions of the Earth” award, every Indian is feeling honoured for this great achievement. This award is the recognition of not only our civilizational values which upholds sustainable environmental approach in our daily life but also acknowledges the innovative measures initiated under the farsighted leadership of Shri Narendra Modi. India has taken giant leaps in almost all sectors of governance under the dynamic and visionary leadership of the Prime Minister and it imputes every Indian with a sense of pride on the environmental front that his unique contribution has been recognized globally.

The call for a people’s movement for cleanliness and sanitation given by Prime Minister is another unique programme which is gaining momentum with every passing day. The ‘Swatchta Mission’ launched by Shri Narendra Modi on 2nd October 2014 has come a long way registering massive people’s support for the cause. A movement inspired by the vision of Mahatma Gandhi has led to major transformation in the work culture, sanitation and health consciousness among the people making it one of the most successful programmes in the world. While the celebrations of its achievements on 2nd October 2018 makes every Indian proud, the pace with which village after village are declared ODF and sanitation coverage is realized, the power of such programmes is now visible to the world. The huge difference that this programme has made among the people can be seen from the fact that today more than 85% of the households have access to toilet, over 400 million Indian no longer defecate in the open and the sanitation coverage is up from 39% to 95%. The’ Swatchta Hi Sewa’ programme launched on the occasion of Mahatma Gandhi Jayanti on 2nd October will definitely help in achieving the target set for 150th birth anniversary of Mahatma Gandhi in 2019.

The transformation in the life of common people and poorest of the poor is visible in the successful implementation of welfare projects which were never imagined earlier by any government. The ‘Ayushman Bharat’ is such a project which is set to completely transform the health sector while enabling the poorest of the poor to avail free high quality health services in the days to come. When today every household is getting connected to electricity grid, having toilets and getting gas connections, the life in remote villages is getting transformed for the better. This massive transformation is the result of dedicated and untiring work of the Prime Minister Shri Narendra Modi who is making possible which was unthinkable few years back.

The country is experiencing a sense of achievement and pride for the political will displayed in decisions taken by Prime Minister both at national and international level. Apart from glowing achievements at the domestic front, under his leadership India has made its’ mark globally. Who can miss the determination of Shri Narendra Modi in signing S-400 Triumf accord with Russia even in the face of US sanctions? Similarly the diplomatic skills displayed in handling US sanctions on Iran in India’s favour are commendable. Although no one knows about the US approach in future but the firmness displayed by the Prime Minister has ensured that India will continue to take its decisions independent of any external or internal pressures and can protect its interests in the face of any unforeseeable challenges. The policy of “Nation First” is emerging out triumphantly with each decision of the BJP led NDA government at the centre with India gaining its place of pride in the world.

Prime Minister Shri Narendra Modi has shown to the world that India is capable of leading from the front and determined to emerge as a developed country. While a huge wave of transformation is sweeping the country by uplifting the poorest of the poor from the morass of poverty, India is emerging globally as a nation capable of taking independent stands on challenges both at domestic and global levels.