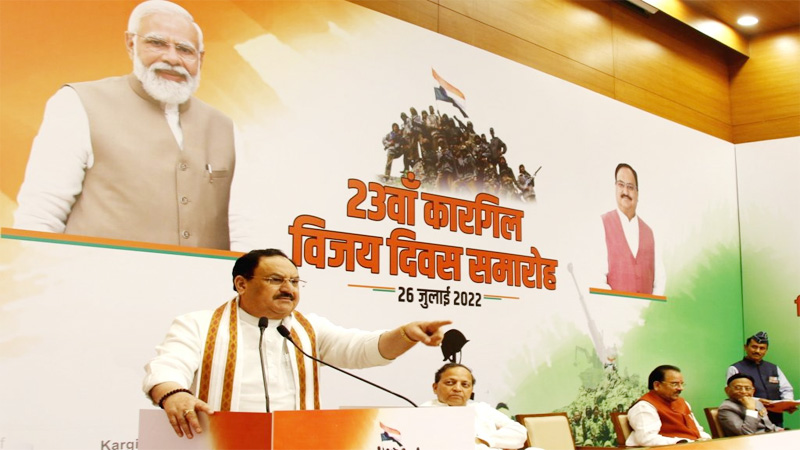 BJP National President Shri JP Nadda in his address on the occasion of 23rd Kargil Vijay Diwas at BJP National Headquarters in New Delhi on 26 July, 2022 said instead of importing bulletproof jackets in the country, India is now exporting them and added, it is due to the change in leadership that today, soldiers do not have to report at multiple stages but “Attack and then report to us is the new policy”. ‘Kargil Vijay Diwas’ is celebrated every year on 26 July to mark India’s victory over Pakistan in the 1999 Kargil war. Salient points of Shri JP Nadda’s speech:

–I on behalf of crores of Bharatiya Janata Party workers pay my deep respect to the martyrs of Kargil who laid down their lives to protect our Motherland and our honour.

–Today, under the leadership of Prime Minister Shri Narendra Modi, the hardware and software of our armed forces is strong. Our soldiers are the most courageous and most efficient in the world today.

–We all need to understand the importance of decisive, dynamic and strong leadership in our nation’s safety and security. First, it was Prime Minister Shri Atal Bihari Vajpayee and now Prime Minister Shri Narendra Modi who linked ‘Pride’ and ‘Proud’ from leadership to our brave soldiers. This is the real contribution to the Bharatiya Janata Party and its Prime Ministers to our armed forces.

–Till 2014, our armed forces were 20 years behind in terms of technology, ammunition, fighter planes and infrastructure, and it was because for 10 long years the Congress-led UPA government did nothing for the modernization of our armed forces and also failed miserably in upgrading our infrastructure on our borders.
The Congress-led UPA government’s defence minister once said his government was not improving infrastructure on our borders along China because he feared it could displease China.

–The construction of border roads, strategic bridges and communication infrastructure development is going on in a fast pace under the leadership and guidance of Prime Minister Shri Narendra Modi.

Today we have a full squadron of Rafael, we have fighter Apache, Chinook, we have surface-to-air missiles, deadly Howitzers, Vajra artillery guns, while we have started exporting bulletproof jackets. We are developing a state of the art missile tracking system.

National War Memorial was pending since 1960

For Bharatiya Janata Party it is ‘Nation First’

@Jagat Prakash Nadda
Today, on the 23rd #KargilVijayDiwas, I paid homage to all those martyrs who made the Supreme Sacrifice to defend Maa Bharti at the BJP HQ in New Delhi. Their valour, courage & bravery will always inspire us. We remain forever indebted to our men & women in uniform. Jai Jawan.