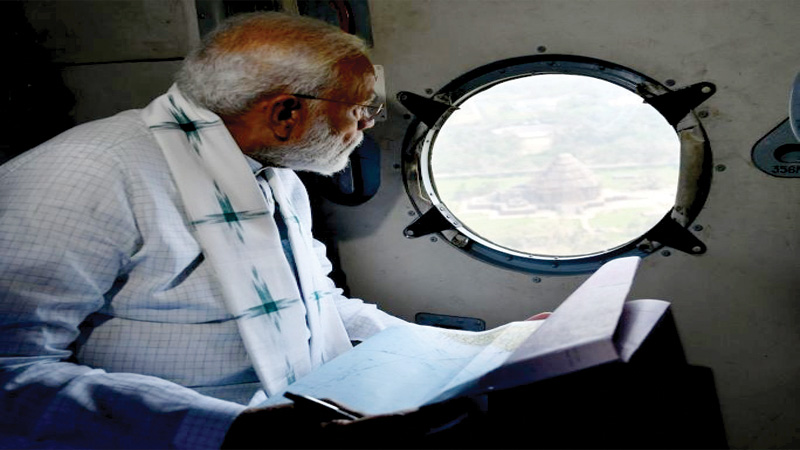 Prime Minister Shri Narendra Modi on 6 May, 2019 conducted an aerial survey to review the damage caused by Cyclone Fani, which claimed at least 37 lives in Odisha last week. The Prime Minister also lauded Chief Minister Naveen Patnaik for the latter’s efforts to evacuate 11 lakh people from the coast, provide relief and assistance to the people.

“Naveen babu ne bahut acha plan kiya, Bharat sarkar usmein unke saath reh karke sari cheezon ko aage badha payegi (CM Naveen has done a good job. The Centre will work with the state government to take things forward),” the Prime Minister said.
The PM said, “Communication was very good between the state and central government. I was also monitoring the situation. The way the people of Odisha complied with every instruction of the government is praiseworthy”.

“The Government of India has announced Rs. 381 crore earlier. A further Rs 1,000 crore will be released,” he added.

The Prime Minister also expressed full solidarity with the people of Odisha. He said the Centre is fully committed not only for providing immediate relief but also to ensure the rebuilding of the state.

PM Shri Modi also spoke to CM Naveen Patnaik just after the cyclone and discussed the situation in the aftermath of Fani, assuring continuous support from the Centre.
With the instructions of the PM the National Crisis Management Committee, headed by Cabinet Secretary P K Sinha, had reviewed relief measures in affected areas of Odisha, West Bengal and Andhra Pradesh.

Cyclone ‘Fani’ barreled through the coastal Odisha near Puri on 03 May, 2019, causing widespread destruction in the coastal areas from Ganjam to Balasore and leaving lakhs grappling with water shortage and power cuts.