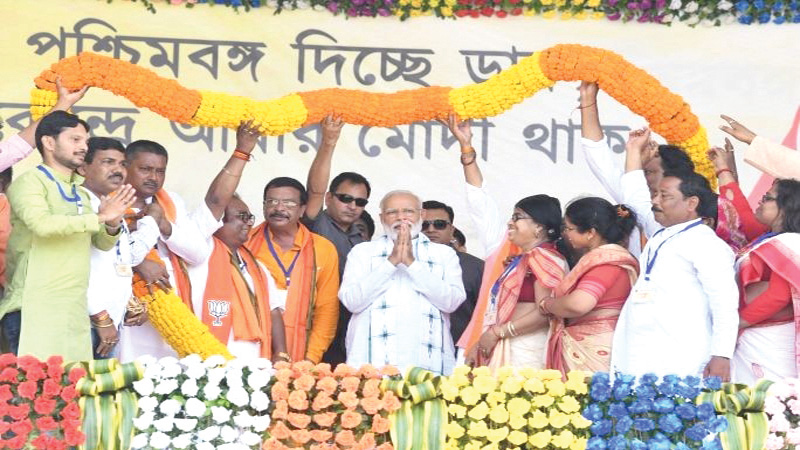 Prime Ministers Shri Narendra Modi began his campaign trail for the 2019 General elections and Assembly elections in some of the states, with rallies in Meerut in Uttar Pradesh, Rudrapur in Uttarakhand and Jammu in Jammu and Kashmir. Since then from Kashmir to Kanyakumari and Jamnagar to Silchar, there is no part of the nation that the Prime Minister did not visit.

Shri Narendra Modi is known for his high levels of energy but, the scale of his activity in the last few months will surprise everyone. In the period from 25th December to 1st May, which is around 125 days, the PM has held 200 programmes across 27 states and Union Territories. The Prime Minister joined 30 programmes in Delhi itself. These numbers speak for themselves. They also offer a unique glimpse into the working style and multi-tasking abilities of our PM Shri Narendra Modi.

The Prime Minister is not only the official face of the BJP campaign but its star campaigner as well. From the beginning of the election process he has addressed several massive rallies, participated in Road shows and interacted with the public in several programs in various places of the country. In every speech the PM has been trying his best to give the report card of the last five years of his government at the centre and reveling his vision and road map of development for the country in upcoming times.

Here we are publishing the excerpts of various speeches of the Prime Minister in different states of the country for our esteemed readers.

Prime Minister Shri Narendra Modi said that West Bengal Chief Minister Mamata Banerjee was fast losing ground in the State. At an election rally in Cooch Behar, West Bengal on 05 May, 2019 Shri Modi charged CM Ms. Banerjee with denting the image of the State and not allowing Central funds to come into the State. “The speed-breaker Didi of Bengal is unable to sleep; she is venting all her anger on her officials and the Election Commission. If someone wants to understand what shifting of political grounds feels like they can understand from her anger and frustration,” he said.

Shri Narendra Modi criticized the Trinamool Congress of being involved in the Saradha and Rose Valley chit fund scams, not utilizing the Centre’s funds and not checking human trafficking and illegal infiltration in the State.

–People here are more matured. They have waited for a long time for the BJP, but now the time has arrived.

–Opposition parties had now come together to oppose “the chowkidar who is working day and night for the country, its progress and strength.

–Congress head Rahul Gandhi forging a clandestine nexus with Left parties, which had been exposed by his decision to contest from Kerala.

–Even in the North-East blockades of all sorts have become a thing of the past and violence is on the decline.

‘Due to the continuous efforts Masood Azhar declared a global terrorist’

Prime Minister Shri Narendra Modi addressed two major rallies in Pratapgarh and Basti in Uttar Pradesh on May 04, 2019. Addressing his supporters, PM Shri Modi said, “Due to the continuous efforts of our government, Pak-based terrorist Masood Azhar was declared a global terrorist by the UN. Now Pakistan must deal with him or should wait for Diwali in India because India will no longer tolerate terrorism against itself in any form.”

The rallies also saw Shri Modi tear apart the divided Opposition ‘Mahamilawat’ and called its leaders as people who are perpetually at each other’s throats. He said, “The work culture of these parties is that of creating rifts within the society, dividing people on the basis of caste and religion and gaining political leverage out of it. The nation has long witnessed the corrupt, unstable governments of the ‘Mahamilawat’ parties and their track record shows whenever they come to power, they bring the country towards casteism.”

–The BJP governments both in Uttar Pradesh and at the Centre have worked to improve the lives of the people.

–The vision of the BJP government to serve the people of U.P is quite clear
We want to eradicate poverty, disease;

–We want to remove caste and other forms of discrimination from the state
We want to create an Uttar Pradesh as a state where hard-working people lead its growth.

–The nation has long witnessed the corrupt, unstable governments of the ‘Mahamilawat’ parties

–This is the major difference between the BJP and the UP’s Mahamilawat of Congress-BSP-SP; while they want to centralize power in their own hands and benefit their closed ones in Delhi, we are constantly working to ensure that government decisions and its impact reaches corners far beyond Delhi.

Prime Minister Shri Narendra Modi addressed three massive rallies in Hindaun, Sikar and Bikaner in Rajasthan on May 03, 2019. The rallies saw Shri Modi tear apart the Congress’ changing claims of ‘surgical strikes’ in their tenure and said, “First they (Congress) mocked our ‘surgical strikes’ and now are themselves claiming that they conducted six such strikes during their terms. First they mocked, then they protested and now they say Me Too, Me Too.”

Addressing the huge crowd of enthusiastic supporters, PM Shri Modi said, “Two days ago, one of India’s greatest enemies, Mazood Azhar, was designated a global terrorist by the United Nations. This Pakistan-based terrorist had become a huge nuisance threatening our nation’s security for a very long time. However, the Congress governments did not take this issue seriously. Our strong national security policy ensured that we bought this terrorist to his rightful designation by the international community. After Uri and Balakot, this is our third surgical strike against terror.”

–First they (Congress) mocked our ‘surgical strikes’ and now are themselves claiming that they conducted six such strikes during their terms.

–Our strong national security policy ensured that we bought Masood Azhar to his rightful designation by the international community.

–Congress governments have always been quite ineffective in addressing the concerns of the people and making their lives easier.

–The people of Rajasthan particularly remember how the Congress even failed to stop India’s share of water that was flowing into Pakistan, which could have been used to reduce water scarcity in Rajasthan.

–The ineffective and corrupt governance of Congress governments brought our country to a phase where India was known globally as a nation of ‘snake-charmers.’
In contrast, under the NDA government’s good governance, India is now knows internationally as the nation of ‘mouse charmers’ owing to India’s vast and growing IT sector.

–These elections have clearly demonstrated that the people of Rajasthan are overwhelmingly in favour of bringing the BJP’s good governance back.

We will continue to make rapid strides in India’s development in the years to come.

Hoshangabad, Madhya Pradesh
‘BJP-led NDA stands firm on its resolve and commitment for greater security for all Indians’

Prime Minister Shri Narendra Modi addressed a massive rally in Hoshangabad constituency of Madhya Pradesh on May 01, 2019 where he talked about various issues concerning the nation such as national security, the mis-governance of the country by Opposition parties as well as his agenda to develop the country for the next five years.

–The recent terror attacks in Sri Lanka reiterated that terrorism remains a great threat to the whole world and needs a strong approach to eliminate it.

–We have followed a zero-tolerance policy towards terrorism and since 2014, we have continuously taken measures to strengthen India’s national security while attacking terrorists in their home-turfs if they dare attack India in any way.

–Compared to the anti-national promises made by the Congress in its election manifesto, the BJP-led NDA stands firm on its resolve and commitment for greater security for all Indians.

–These days Congress leaders are dreaming about killing Modi because he is acting so strong on terror.

–PM Shri Modi questioned the Congress party for its questionable and compromising stance against terrorists and their sympathizers.

–Even the Sri Lankan government recently banned the TV channel of hate preacher Zakir Naik for spreading hate in their country.

–However, we all still remember how a former Congress CM of Madhya Pradesh was all praises about this hate-preacher and even invited him to address our security personnel on the issue of terrorism.

–Do not forget these actions and statements of the Congress leaders when they go to vote.

–Shri Modi said that once elected back to power, his government will work on expanding the social security net for all Indians while also creating infrastructure to address the needs of a growing country like India.