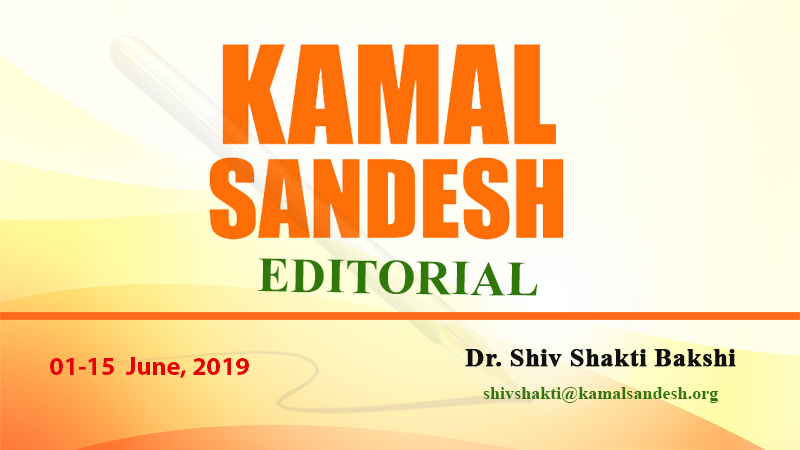 Amassive mandate and a massive win – India has asserted and asserted emphatically. It symbolizes an India aspiring higher and higher, eager to write its own future, ready to take giant leaps, confident and strong. It reflects the rise of an India having dreams in every eye, vision that reaches the horizon and even beyond, willing to transcend limitations of every kind and ready to accept challenges and explore opportunities. It shows an India which is confident of its strength, having faith in its future and full of hope and expectations, an India which is uncompromising and unyielding, an India which stands united and decides together. The mandate 2019 is so massive that rarely anyone can escape its magnitude in creating overall impact on almost every front. It seems as if the nation has become restless realizing its time has come and millions of its hands wants to join with full strength in the glory of Maa Bharati.

The mandate is about India and its people – it is about how the people have voted and delivered their historic verdict. It is for the first time after several decades that people have voted a party with full majority consecutively and that too with increasing numbers of seats. It clearly shows the increasing faith of people in the leadership of Prime Minister Shri Narendra Modi. The intense opposition propaganda and personal attacks against Shri Narendra Modi has further consolidated peoples’ support for him which resulted in smashing defeat for opposition. The failure of opposition in playing a constructive role in parliament and over reliance on the politics of lies, falsehood and deceit let to its total collapse. Not only that the opposition was defeated but it was crushingly defeated when so called ‘formidable’ alliances were formed in many states makes the message of the people loud and clear. It was a decisive victory against all odds, against challenges seemingly impossible to overcome and against various vested interests in the corridors of power.

The Lok Sabha elections 2019 will be remembered for massive people’s participation who came out to vote in large numbers. It was an election which was contested by people themselves while delivering a clear message to every political party that the Indian politics has changed forever and the divisive agenda of opposition was no longer effective in reaping political dividend for them. The sectarian vote bank politics based on caste, region and religion has received a shattering blow and the politics of performance, development and good governance has come out victorious. The politics of appeasement stands defeated and discarded. It signifies the rise of a New India which has risen above the divisive politics of vote bank and appeasement and ready to pave the path of a united , strong, prosperous and confident India.
The verdict 2019 is in continuation of the verdict 2014, but it is even more emphatic and even more decisive. While in the last five years the nation has witnessed transformational changes in every sector, the people have given a decisive mandate to take forward the country under the dynamic and charismatic leadership of Prime Minister Shri Narendra Modi. The positive ambience created due to hard work and visionary leadership of Shri Narendra Modi has found its reflection in BJP organisation which became the largest political party in the world under the determined and firm leadership of BJP President Shri Amit Shah. The remarkable achievements of the government under Shri Narendra Modi and expansion and consolidation of party under the organisational acumen of Shri Amit Shah has resulted in winning the unprecedented faith of the people of India who have blessed the party with such a massive mandate. This is a mandate which shows the desire of the millions eager to walk together paving the path for a New India. This decisive mandate has paved a decisive path for India in the days to come under the strong leadership of Shri Narendra Modi.