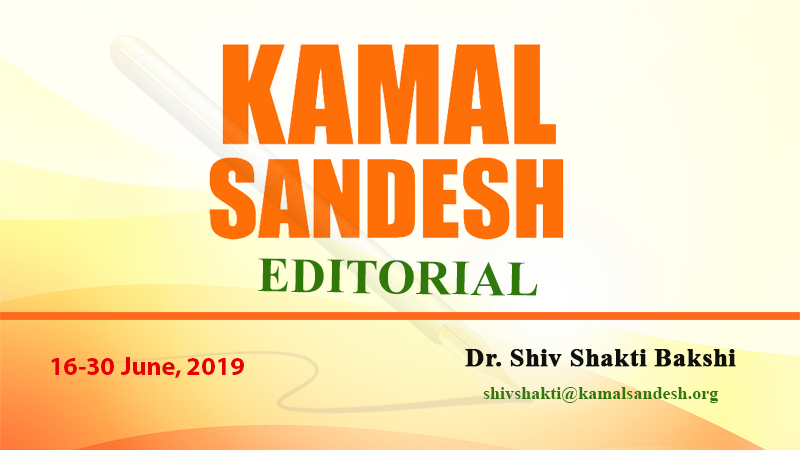 A
s Shri Narendra Modi takes the oath of office of the prime minister of India, the country looks forward for the dawn of a new era in politics. The new era can be seen as the arrival of the politics of performance, good governance and development. It is an era which is based on the mantra of ‘Sabka Saath, Sabka Vikas, with the aim of making ‘Ek Bharat, Shreshtha Bharat’. It is an era which is set to realise the goals of ‘Antyodya’ and committed to the upliftment of the poorest of the poor as its first priority. It is an era which has its focus of SCs, STs, women and youth as the fulcrum of all round economic development of the country. It also signifies an era where rural sector is prioritised and agricultural economy is modernised, where farmers and labourers are facilitated with innovative measures ensuring their overall advancement in every walk of life. It is an era of massive infrastructure development with an eye on India of future, which is advanced in every sector, developed and strong. The swearing-in of the Prime Minister Shri Narendra Modi has unfolded an era wherein the dream of a New India is set to be realised.

The massive mandate in favour of BJP led NDA is the result of hard work and visionary leadership of Prime Minsiter Shri Narendra Modi who rescued India from the quagmire of corruption, policy paralysis, misgovernance and economic slowdown with high rates of inflation and burgeoning budget deficit of Congress led UPA era. The nation saw a hope in the leadership of Shri Narendra Modi and gave him a decisive mandate with BJP getting majority on its own in Lok Sabha elections 2014. It was the first time after around three decades that a single party was given full majority on its own by the people of India. It was the five years of positive approach, persistence and perseverance, innovative ideas and result oriented policies while heralding a new work culture in governance, restoration of institutional mechanism, timely actions and sometime tough decisions that helped in restoring credibility of the government. The impact of the commitment of the Prime Minister Shri Narendra Modi to the nation was seen in a corruption free government which was able to deliver the fruits of welfare programmes directly to the poorest of the poor even in the remotest part of the country. It was for the first time that the last men in the society became direct beneficiary of the government welfare projects and his basic needs were addressed in the form of pucca house, free electricity connections, gas cylinders, toilets, bank accounts and other basic amenities while bringing him under social security net and providing health security cover upto five lac to 10 crore families.There is no doubt that as Shri Narendra Modi had dedicated his government to the poorest of the poor, SCs, STs, oppressed and exploited in his first speech after getting elected as leader of NDA parliamentary party in 2014, he not only lived upto his commitment but even went beyond all the expectations – the result is the massive mandate, even bigger than 2014, in the form of the blessings of the poorest of the poor of the country who voted rising above caste, region and religious divisions while ensuring that India remains in the safe hands for a glorious future in the days to come.

The massive mandate of 2019 has not only reposed massive trust on the Modi government but also enhanced responsibilities to carry forward the hopes and expectations of the largest democracy of the world. India is a nation which represents a civilization manifested through numerous traditions celebrating pluralism and diversity since ancient times. The massive mandate shows the national urge to rise above the divisive politics and come out in support of the politics of performance, good governance and development. It is an immensely welcome sign for the Indian democracy that people are now not only voting for their aspirations but eager to build a strong and prosperous India which can claim its rightful place in the comity of nations. The people know that under the charismatic and visionary leadership of Prime Minister Shri Narendra Modi, as nation stands united in its aspirations, a glorious future awaits India.