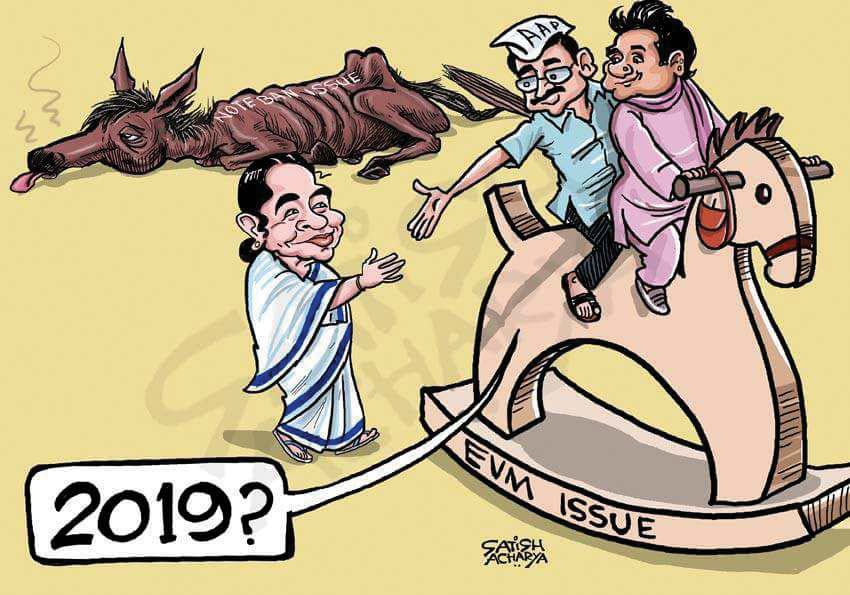 Blaming EVMs for electoral debacles the UPA and its ideological cousins are trying to build a grand alliance to confront the NDA at the national level. Last week Rahul Gandhi contacted Bihar Chief Minister Nitish Kumar, RLD leader Lalu Prasad Yadav and TMC leader and Bengal Chief Minister Mamata Banerjee with this purpose. BSP leader Mayawati, staring at political oblivion after the trouncing in UP and AAP leader Arvind Kejriwal are already hobnobbing with the Congress to oppose the NDA though Congress is facing its worst ever political crisis in its history.

Congress has never before in the last seven decades shrunk so small as under Rahul Gandhi. The party is reduced to a rump compared to its powerful past. In the last three years Congress lost power in thirteen states and gained power in just one — Punjab. The BJP on the other hand during the same period retained all its strongholds and captured Manipur, Assam, Arunachal Pradesh, Jharkhand, Uttar Pradesh, Uttarakhand, Haryana, Jammu and Kashmir, Rajasthan, Maharashtra, and its allies gained power in Andhra Pradesh. Only Punjab was lost to Congress by the Akali-BJP alliance. In two third of the population living in India it is BJP ruling in the states. The Congress is ruling only ten per cent of the population. This is bound to have its impact on the President and Vice Presidential elections in the coming summer and the Rajya Sabha polls next year.
For the first time in history, the BJP is in a position to elect its own President and Vice President with support from its allies and the BJP will emerge as the single largest party in the Rajya Sabha.

This is a big achievement of the transformational and progressive leadership of the Prime Minister Shri Narendra Modi who foresaw the emergence of a Congress-mukt Bharat. For the BJP, big political strikes were masterminded by the strategic acumen, sagacity and vision of the party chief Shri Amit Shah, who in just two and a half years reshaped and piloted the party into a dynamic instrument of socio-political transformation. On April 6, the BJP Foundation Day, Shri Amit Shah exhorted the party to win new areas, move further south and focus on capturing power in Kerala, Tamil Nadu, Orissa, Tripura and Bengal. He drew a scintillating map of a saffron India under the BJP grasp.

The BJP has clearly emerged the party of power under the leadership of Modi-Amit Shah team. Till a few years ago the Congress used to be termed the natural party of power.

Today the Congress which used to boast about its invincibility is in total disarray. It has lost its élan and vitality. The party is desperately looking for allies to take on the BJP. The party is not able to keep its own leaders under check. Desertions from the party have become the order of the day. Senior party leaders have lost confidence in the leadership’s ability to steer the party from the present crisis.

The political turmoil, corruption and social tension in the states under non-NDA rules are a sharp reflection of the defeatism that has gripped these parties. Is it feasible in the present context for Rahul to win the confidence of other parties to work on a common agenda? And even if political compulsions and desperation bring them together on a common platform will it sustain till 2019? And will it be able to evoke a positive response from the people of the country? States under the non-NDA parties are marching from crisis to crisis. For instance the CPM ruled Kerala is in news for all wrong reasons. The latest to catch screaming headlines is the police dragging on the street a weeping, protesting mother whose twenty year old engineering college student son committed suicide due to harassment by the college management. The entire family is of CPM supporters, the boy was a SFI activist, but the culprits were being protected by the regime for pecuniary benefits, according to the victim’s family. The mother had gone to seek justice and sit in dharna in front of the police headquarters. But the police acted unsympathetically and the police action was brazenly justified by the Chief Minister Pinarayi Vijayan and his cabinet colleague. The incident has sharply divided the party and the ruling LDF. The LDF that came to power promising change for the better from the previous Congress-led UDF has totally failed in the last one year to make an impact.

In Karnataka and Himachal the two states going to polls in less than a year from now the ruling Congress is facing large scale desertions to BJP. Last week senior leader SM Krishna left the party to join BJP. Now reports are that Jaffar Sharief another leader is quitting. There have been at least a dozen major corruption cases against the Karnataka and Himachal governments. In Himachal the CM and his family are facing major charges in disproportionate assets case.

The Bihar government is split between two camps with Lalu staking his son’s claim to be chief minister in place of Nitish. Soon enough a graft charge involving a thousand crore in sand mining came to light against Tejeswi Yadav. The government under AAP in Delhi has crossed all records in corruption and misrule within two years.

It is this corrupt, desperate and greedy rump that Rahul is trying to bring under one umbrella to defeat the BJP. Well, Modiji can now very easily say they want to remove me because I want to remove poverty and corruption and bring happiness for all.

(The author is a senior journalist and political analyst.
He can be contacted at Balashankar12@gmail.com
Twitter @drbalashankar. Ph.09811971071)