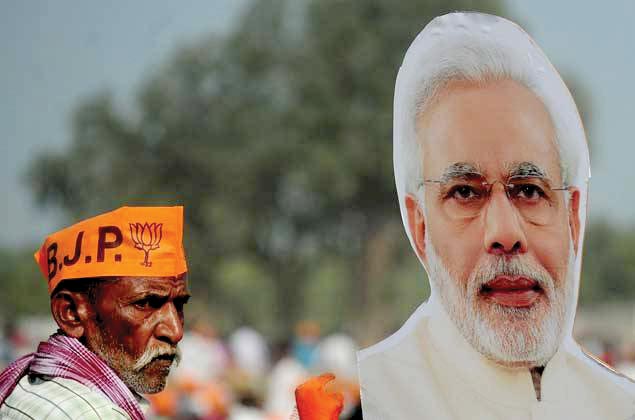 Blood, famously, has no religion. Poverty goes a step further: it has neither caste nor creed. What separates haves from have-nots, the satisfied and opulent from the economically battered, is not where they were born but how they live.

For too long, the manipulative power brokers of Indian politics have curtained the truth about poverty and aborted aspirations behind a screen of ancient or manufactured identity. What started in the 1950s as minority vote-banks expanded into an electoral industry in which identity, splitting with the fecund insanity of an amoeba, was driven into ever-smaller enclosures and sold, wholesale, by vote-merchants to political parties in a currency called insecurity.

Elections became an exercise in human mathematics. Leaders like Lalu Prasad Yadav (to offer only the most gratuitous example) actually laughed away good governance as irrelevant to their success.

Why did the voter participate in this fixed game? There will always be more than one reason, but we need to consider the long trail of disillusion that came in the long wake of Indira Gandhi’s indelible slogan: ‘Garibi Hatao’. Her promise wilted into an illusion, and alternative options arose to fill the vacuum.

Homegrown socialists brought caste to the forefront. And Congress became synonymous with dynasty, corruption and privilege. Where poverty was concerned, Congress became a talk shop. Its rhetoric degenerated from effective to glib, and has now become an incomprehensible stutter.

The poor have finally found a leader who is doing something about their hopes: Narendra Modi.
Two quotations define his vision of government. In his very first speech to Parliament, he marked the horizon. The era of poverty alleviation was over, he said, and the age of poverty elimination had begun. The second message, articulated in moving language during his first address from the Red Fort, was that governance was nothing if it was not about improving the quality of life for the poor every day. One recalls the scoff and sneer with which his opponents, including some of the elite which clusters within Lutyens’ Delhi, reacted.

But if you want to understand the results of Uttar Pradesh, take a look at facts. The Prime Minister started Mudra as a scheme of economic empowerment through self-reliance, creating jobs below the radar of conventional statistics. In 2015-16, UP alone took 33,45,382 loans worth Rs 12,275 crores. In the next year, 28,60,243 collateral-free loans worth Rs 10,755 crores were sanctioned for UP. This money, moreover, did not go into unstable or punctured pockets; it went into bank accounts, and began to prove to the poor the efficacy of a parallel programme, Jan Dhan.

More than 40 million Jan Dhan accounts were opened in the state, 25 million of them in rural areas. Over one million people have taken insurance at a premium as low as Rs 12 under the Suraksha Bima Yojana. Over 52 lakh homes that never believed LPG would come in their lifetimes, have received deposit-free connections in UP. There is better sanitation thanks to lakhs of new toilets, particularly for impoverished women. This list is only indicative, not exhaustive. It slowly began to sink into the consciousness of people that Modi believed in delivery.

Jan Dhan will prove, when books are written about it (and we may not have to wait too long now), as the most transformative reform in banking history, shifting the central mission and purpose of this system. Banks are partners in development, but that is not the new question. It is, development for whom? Banks must become servants of the people rather than mere masters of the economy. Indira Gandhi nationalised banks in the name of the poor, but the poor had to wait till Narendra Modi became Prime Minister before banks opened their doors to them.

Once again, when Jan Dhan began, the jeers were loud on television channels, the parlour of opinion-makers. Opposition leaders chortled: there is no money in these accounts ha ha ha! They could not see that, for the first time, accounts were being opened for precisely those with no money. Today direct benefits do not have to crawl through sticky sets of fingers before they reach the beneficiary. They can go straight to an account.

Why did so much of the political and media establishment refuse to recognise such dramatic change? The status quo, happy with its status and attendant benefits, tends to be change-resistant; it will even shut its eyes to a revolution in the hope that this will pass unnoticed. What surprised me most, however, was the huge misreading of demonetisation, when the evidence to the contrary was so widespread. Did anyone hear the marriage songs in Bihar last winter? Local bards had packed improvised songs with gleeful lines noting frantic efforts to unload cash from hidden gunny bags. For me, a municipal election in Chandigarh after demonetisation was a herald to UP. Votes from huts and shanties shifted to BJP from Congress.

Of course, any round of elections in states is a massive enterprise that needs skilful management. BJP party chief Amit Shah has proved to be the brilliant partner that Prime Minister Modi needs, working with meticulous commitment to build and modernise the party, unaffected by hiccups, and ensuring that the core message of development for all was never lost in the din. Indian democracy is noisy.

Politicians who did not recognise the reinvention of electoral mobilisation are bewildered. Above all, they cannot understand how Muslims have voted for Narendra Modi. BJP won 104 constituencies with a substantial Muslim presence; it could not have done so without getting some Muslim votes. Mayawati, an important national leader who has been chief minister of UP, claimed that this was only possible through fraud. Self-delusion is not analysis. Her mind is still in the grip of brokers who hand over votes on election day in order to fatten themselves for the next five years. Muslims publicly welcomed the Prime Minister in Varanasi; and Muslim women have become the first positive responders to the PM. This is among the reasons why this UP result is a seminal point in democracy’s narrative.

Muslims can see for themselves that Mudra loans or insurance or LPG are as available to them as anyone else, on the basis of poverty, and not faith. They can see now that the myths circulated about the PM in 2014 were lies designed for election. They note that Prime Minister Narendra Modi was received with extraordinary warmth in Saudi Arabia; that the Crown Prince of UAE was guest of honour at our Republic Day celebrations; and that relations with other Muslim nations are improving at an excellent pace. In other words, there is no discrimination in either domestic or foreign policy. The PM means what he says, ‘sab ka saath, sab ka vikas’.

But this election was not about religion; it was about India, and the elimination of its inherited curse, poverty. It was about good governance. It was about a Prime Minister who will not tolerate corruption. It was about the people, not conventional politicians.

(The writer is Union Minister of State for External Affairs, GoI)