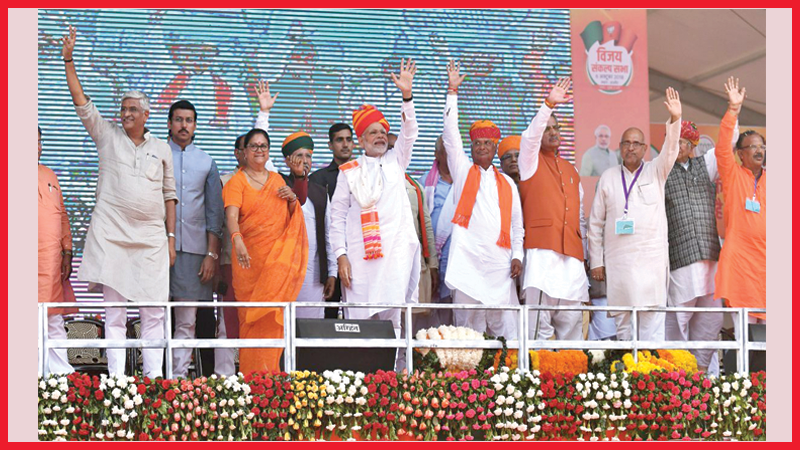 Prime Minister Shri Narendra Modi began his campaigning for poll-bound states with a rally at Ajmer in Rajasthan on 06 October, 2018. In his speech, the prime minister accused the Congress of playing vote bank politics. “On one side there is the politics of vote-bank, and on the other side, you have a government which works with the belief of ‘Sabka Saath, Sabka Vikas’.

He asked people not to let the Congress get into power again in Rajasthan.

Political parties which do vote bank politics divide the bureaucracy when they are in power and this badly affects governance, he said.

“They allocate the budget as per vote bank politics and therefore overall development does not happen,” he said at the meeting which marked the end of Rajasthan Chief Minister Smt. Vasundhara Raje’s state-wide political `yatra’.

“The Congress has established this tradition in the past 60 years,” PM Shri Modi said.

“With great difficulty, the country has picked the right direction now after 60 years. Don’t give them another chance again,” he said.

He said the Congress leaders’ high command is a family and they can do politics only be revering it.

He accused the Congress of “low-level” politics.

The Congress leaders were questioning the surgical strikes by the Army across the Line of Control two years ago and “insulting” soldiers, he said.

“They should be ashamed of indulging in such politics, Shri Modi said.

The rally marked the end of ‘Rajasthan Gaurav Yatra’, an outreach exercise by the Bharatiya Janata Party.

Noteworthy, Rajasthan will go to the polls on December 7. Counting will take place in all five states on December 11, the EC announced.