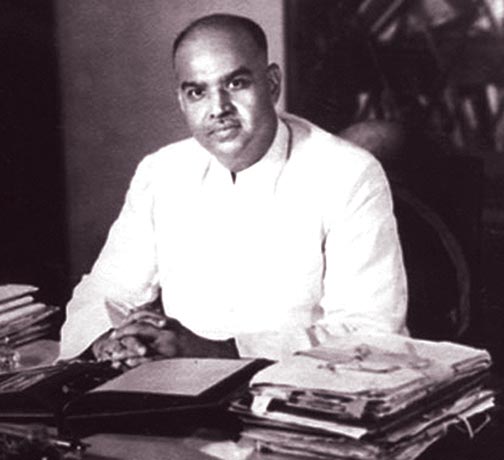 Dr. Syama Prasad Mookerjee’s public speeches outside Bengal were mostly in Hindi. When he first attended the Session of the Hindu Mahasabha, he could not speak in Hindi. But he promised to learn the language and the following year he spoke in Hindi. Of course it could not be expected of him to use grammatically correct Hindi. But he could always express himself correctly, and on most occasions was quite forceful.

When He Insisted On Hindi

He had written his presidential address to the inaugural session of Bharatiya Jana Sangh in English. But he wanted it to be distributed to the delegates in Hindi. But time was short. It was 20 October. The address was to be read the next day at ten in the morning. Besides, the Subjects Committee too was meeting on the 20th. But he was very keen about the matter. Consequently not only the Presidential address but the manifesto also was translated into Hindi, and through the untiring zeal of the workers of the Arjun Press, both of them could be printed to be presented in time to the delegates. However, Dr. Mookerjee did not read the address. As was his practice he spoke extempore. His speech was more expressive than the translation.

In his Hindi speeches Dr. Mookerjee would freely use Sanskrit words. Therefore, he never found any difficulty in finding the correct word. And because of Sanskrit his style was chaste too. However, he would not use the word “sarvanash”, but say “Khatarnash” instead. It was a word that he had coined. He always thought that he was using a wrong word. But we hesitated to point out the mistake. One day, of course, when in a casual chat language happened to be the topic under discussion, I pointed to him that “Khatarnash” was not the proper word.

It would be correct if he used, ‘sarvanash’ or ‘satyanash’. He thanked me for the suggestion, but said, “Don’t you see that there is a shade of difference between ‘Khatarnash’ and ‘sarvanash’?” Yes, the difference is there.

It was this difference that distinguished Dr. Syama Prasad Mookerjee from the host of opposition leaders in the country. Dr. Mookerjee was vigilant and always drew the attention of the Government and people to the dangerous potentialities of the Government and people to the dangerous potentialities of any wrong policy or step. But he was neither a prophet of doom nor a cynic. And therefore he coined perhaps consciously a new work ‘Khatarnash’, ‘Sarvanash’ means total destruction while ‘Khatarnash’ (though a hybrid word with Persian Khatra and Sanskrit nash) indicated the danger and the possible harm if steps to avert it were not taken. If this difference is understood and appreciated the purpose of opposition will not be a senseless criticism of the Government but a constructive contribution to the formulation of the nation’s policies. It is only on this score that the opposition can seek justification for its existence.

The task of the opposition is not to mislead but to lead. Its functioning should not be negative but positive. It must not allow the Government to be complacent or negligent.

But it should not create a scare or demoralise the people.

“Jana Sangh At Least Has Not Lost Its Head”
In the first General Elections the Congress swept the polls. Most of the opposition leaders had been defeated. Parties that had promised a change of Government to the people were routed. In that atmosphere one gentleman approached Dr. Mookerjee and said that the future of democracy in India was dark. Dr. Mookerjee asked him two questions. 1. Have you faith in democracy? 2. Do you resolve to work actively in politics?

The gentleman replied in the affirmative to both these questions. Then how could the future of democracy in India be dark? Said Dr. Mookerjee,and added, “It will be dark only if we do not work or if you have no faith. Where there is faith, there is no darkness.

It must be bright.” I found that was really the man who could lead. We occasionally meet people who are called “leaders” but who hardly inspire confidence in the people. On the contrary if you go to them with the confidence of youth you come back with the diffidence of age. Dr. Mookerjee was not one of them. When we met him, he did not bemoan the defeat. He reminded us of the hard work that must be put in if we wanted to succeed, and then said, “Jana Sangh at least has fared better. All other parties have lost their heads, but your president has succeeded.” Yes that was the bright side of the otherwise gloomy picture, and it inspired us to make the future brighter.

Today, after twelve years of Dr. Mookerjee’s death the country is passing through harder times. We have no Mookerjee amongst us. But his spirit is alive. If there are people who talk to you in terms that predict a dark future for the country, dismiss them as faithless and purposeless fellows. After all we are the builders of our future. We are not simply passive on lookers but active participants in the building of the country’s history. If those in power commit mistakes it is our duty to correct them and not merely to derive a demonic satisfaction in their failure or rest content with pointing out that they have committed mistakes. And along with that it is our task to organise the people so that they assert democratically to replace the Government as it becomes incapable of shouldering the burden entrusted. Dr. Mookerjee has given us this constructive outlook. He was the leader of the Opposition aimed to be in power. If we keep that objective constantly before us and have faith in our mission, the opposition will always be responsible. It will not be a clog in the wheel but an added motive power to the governance of the country. The attitude alone will make democracy a success and safeguard national interests.