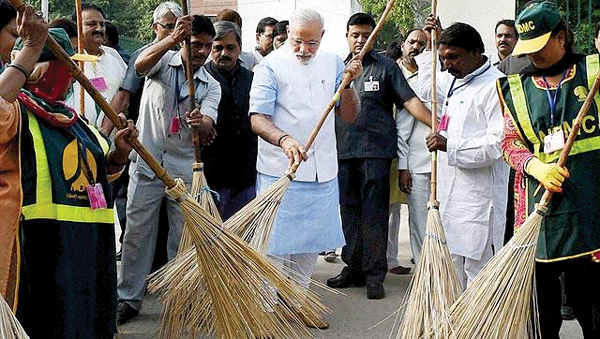 The Swachh Bharat Mission has a budget of more than $20 billion over five years from central and state governments. Additional investments have been coming in from the private sector, developmental agencies, faith based institutions and citizens.

s they say , no one can stop an idea whose time has come.Amidst the backdrop of a bloody world war, when violence was the order of the time, India achieved independence through non-violent civil disobedience, through Satyagraha. The entire nation rallied behind the Mahatma’s call and India achieved her independence setting an example for the world. It was an idea whose time had come.
Likewise, Prime Minister Narendra Modi’s call for a Swachh Bharat with universal sanitation by 2 October 2019, at a time when India leads the infamous list of countries with the highest number of people practising open defecation, is an idea whose time has come.
Open defecation dates back to the beginning of human civilisation. It has been a way of life for millions of people in India for centuries. Successive governments have been running national sanitation programmes since the 1980s, but till 2014 only 39% of Indians had access to safe sanitation facilities.

This is because access to sanitation is not an infrastructure problem, there is a deeper behavioural and socio-cultural context at play . Influencing a change in behaviour for 60 crore people is a challenge that has probably never been undertaken by anyone in the world.
This could only be achieved through an intensive, time-bound intervention, spearheaded from the highest level, and involving all sections of society and government alike. The Swachh Bharat Mission’s Swachhagraha has caught the nation’s imagination just the way the Mahatma’s Satyagraha had, many years ago.

The importance of sanitation is well documented, with its effect on child mortality due to diarrhoeal diseases, and the safety , security and dignity of women being clearly established. But the underlying costs of the lack of sanitation are a lot more than meet the eye.
A study by the World Bank estimates that nearly 40% of India’s children are physically and cognitively stunted, primarily because of the lack of sanitation. Such a large proportion of our future workforce not being able to reach their full productive capacity poses a serious threat to our biggest strength ­ our demographic dividend.

Solving this problem is at the core of our developmental agenda and to our potential of becoming a global economic superpower. The World Bank also estimated that the lack of sanitation costs India over 6% of our gross domestic product (GDP).

A recent study by UNICEF on the economic impact of sanitation has estimated that in an open defecation free village, each family saves over Rs 50,000 per year on account of avoided medical costs, time savings and lives saved. Additionally , there is a huge potential of generating wealth from waste through good solid and liquid resource management.

The study also concluded that the eco nomic benefits of sanitation per household outweigh the cumulative investment (government spend plus other modes of financing including household contribution) by 4.7 times over a 10 year period. There is clearly an overwhelming case for investments in improving sanitation access.

The Swachh Bharat Mission has a budget of more than $20 billion over five years from central and state governments. Additional investments have been coming in from the private sector, developmental agencies, faith based institutions and citizens.
The Swachh Bharat Kosh has already collected and released over Rs 660 crore for specific sanitation projects. These funds have been raised through private contributions by individuals, companies and institutions, with the single highest contribution of Rs 100 crore coming from a faith leader, Mata Amritanandamayi.

Several private companies have worked especially for sanitation in schools through their CSR funds. But there is still a large potential to leverage the private sector’s creativity and innovation for the Swachh Bharat Mission. All the ministries and departments of the government of India are attempting to mainstream sanitation in their respective sectors, and they have also committed a specific budget for sanitation and cleanliness, totalling to over Rs 12,000 crore for FY 2017-18.

The Swacch Bharat Mission is fast becoming a mass movement, or in the words of Prime Minister Narendra Modi ­ a jan andolan. It has already successfully brought down the number of people defecating in the open in India to a little over 30 crore, with over 68% Indians now having access to safe sanitation.

But there is still a long way to go. To further intensify this momentum, the government has initiated the Swachhata Hi Seva fortnight between 15 September and 2 October.

During this fortnight all sections of society ­ ministries, parliamentarians, central and state government officials, celebrities, organisations, corporates, local leaders and citizens ­ will dedicate themselves to Swachhata by offering shramdaan, thus spreading the infectious energy of the Swacch Bharat Mission far and wide.

It is time for everyone to roll up their sleeves and play their part in creating a Swachh Bharat, an India that the Mahatma had dreamed of. If you are reading this, go ahead and do your bit.

(The writer is Union Finance Minister of India)