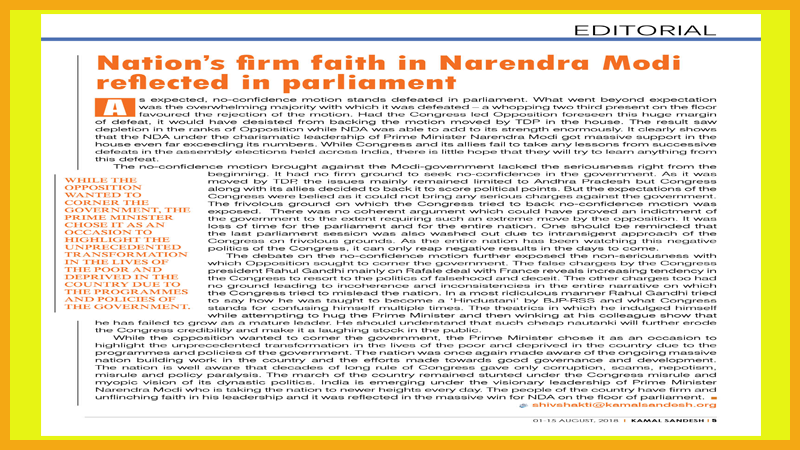 As expected, no-confidence motion stands defeated in parliament. What went beyond expectation was the overwhelming majority with which it was defeated – a whopping two third present on the floor favoured the rejection of the motion. Had the Congress led Opposition foreseen this huge margin of defeat, it would have desisted from backing the motion moved by TDP in the house. The result saw depletion in the ranks of Opposition while NDA was able to add to its strength enormously. It clearly shows that the NDA under the charismatic leadership of Prime Minister Narendra Modi got massive support in the house even far exceeding its numbers. While Congress and its allies fail to take any lessons from successive defeats in the assembly elections held across India, there is little hope that they will try to learn anything from this defeat.

The no-confidence motion brought against the Modi-government lacked the seriousness right from the beginning. It had no firm ground to seek no-confidence in the government. As it was moved by TDP, the issues mainly remained limited to Andhra Pradesh but Congress along with its allies decided to back it to score political points. But the expectations of the Congress were belied as it could not bring any serious charges against the government. The frivolous ground on which the Congress tried to back no-confidence motion was exposed. There was no coherent argument which could have proved an indictment of the government to the extent requiring such an extreme move by the opposition. It was loss of time for the parliament and for the entire nation. One should be reminded that the last parliament session was also washed out due to intransigent approach of the Congress on frivolous grounds. As the entire nation has been watching this negative politics of the Congress, it can only reap negative results in the days to come.

The debate on the no-confidence motion further exposed the non-seriousness with which Opposition sought to corner the government. The false charges by the Congress president Rahul Gandhi mainly on Rafale deal with France reveals increasing tendency in the Congress to resort to the politics of falsehood and deceit. The other charges too had no ground leading to incoherence and inconsistencies in the entire narrative on which the Congress tried to mislead the nation. In a most ridiculous manner Rahul Gandhi tried to say how he was taught to become a ‘Hindustani’ by BJP-RSS and what Congress stands for confusing himself multiple times. The theatrics in which he indulged himself while attempting to hug the Prime Minister and then winking at his colleague show that he has failed to grow as a mature leader. He should understand that such cheap nautanki will further erode the Congress credibility and make it a laughing stock in the public.

While the opposition wanted to corner the government, the Prime Minister chose it as an occasion to highlight the unprecedented transformation in the lives of the poor and deprived in the country due to the programmes and policies of the government. The nation was once again made aware of the ongoing massive nation building work in the country and the efforts made towards good governance and development. The nation is well aware that decades of long rule of Congress gave only corruption, scams, nepotism, misrule and policy paralysis. The march of the country remained stunted under the Congress misrule and myopic vision of its dynastic politics. India is emerging under the visionary leadership of Prime Minister Narendra Modi who is taking the nation to newer heights every day. The people of the country have firm and unflinching faith in his leadership and it was reflected in the massive win for NDA on the floor of parliament.