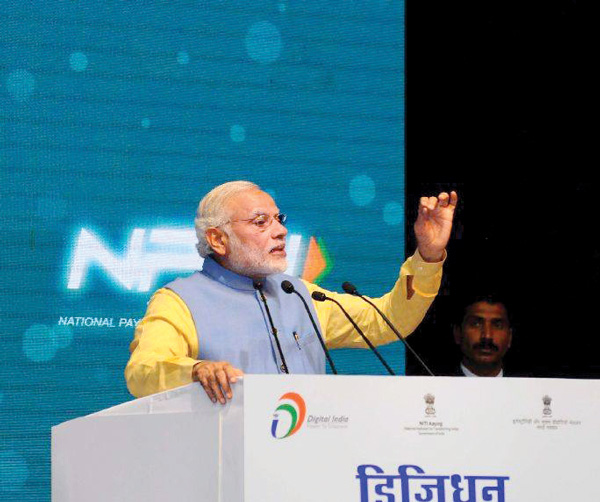 Prime Minister Shri Narendra Modi addressed the concluding session of the BJP National Executive meeting held at Talkatora Stadium in Delhi on 25 September, 2017. In his inspiring address he said people have taken notice of BJP’s positive attitude. The party has now become the focal point of Indian politics. The country looks towards us for its future. Therefore, the BJP must be more involved to ensure that people’s lives were improved and politics to be centered around people’s benefit.


We are publishing the excerpts of the Prime Minister’s speech for our readers:

Addressing the concluding session of BJP National Executive Meet in Delhi on 25 September, 2017 Prime Minister Shri Narendra Modi said People have taken notice of BJP’s positive attitude. The party has now become the focal point of Indian politics. The country looks towards us for its future and no other party is as active as the BJP. He said democracy must be seen beyond elections.

He said that people have placed their faith in BJP. Therefore, the BJP must be more involved to ensure that people’s lives were improved and politics to be centered around people’s benefit.

Prime Minister said that opposition was stooping to harsh language to substantiate their point. They are unable to deal with the fact that they are out of power. Harsh language cannot be substitute for any substantive charge against the Government.

Shri Modi assured that the fight against terrorism as well as corruption will continue.

He said the steps this BJP government has taken from Day one, have always ensured that we work towards a corruption-free environment. Demonetization, pulling down Benami properties, shutting down shell companies among other measures were some of the big steps we have undertaken till date to root out corruption.

Shri Modi said UPA didn’t take a single step against black money and corruption; it’s obvious their leaders will be uneasy over our measures against it. He said power was means of enjoyment for the opposition when it was in government.

PM Modi said the government is boosting transparency and curbing black money. So the economy is expected to hail demonetization and GST as revolutionary measures taken in national interest and the economy has been doing better under the BJP-led NDA than it did under the previous Congress-led UPA government.

-We must take BJP beyond elections and make it an instrument of mass participation.

-BJP is the most important political party in the country.

-No other political party in the country is as active as the BJP.

-BJP to organize ‘Run For Unity’ on Sardar Patel’s birthday on 31 October.

-The battle against corruption is uncompromisable’.

-Economy has improved under this Government.

-We have successfully highlighted the issue of terrorism in front of the international community and exposed Pakistan.