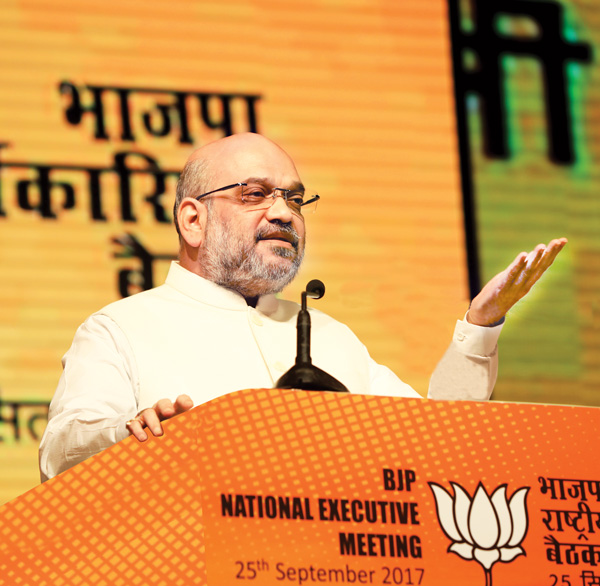 The two days BJP National Executive meeting kicked off in Delhi on 24 September, 2017. On the second day All BJP National Office Bearers, BJP MPs, MLAs, and MLCs; and core group leaders from the States have attended the National Executive meeting at the Talkatora Stadium, Delhi. On this occasion the party wraps up the year-long celebrations to mark the Birth Anniversary of Pt. Deendayal Upadhyaya. On the first day BJP National President Shri Amit Shah presided over the meeting and met Office-Bearers, State Presidents and key organizational leaders and reviewed the progress of the organisation. On 25 September Shri Amit Shah addressed the opening session of the National Executive Meeting and in his stirring address he said BJP has always worked on politics of performance. We believe on politics of performance and we are working for the upliftment of the poor. He said,”We hope a new India is created under this same leadership in 2019”.
We are publishing the excerpts of the Presidential speech for our esteemed readers:

BJP National President Shri Amit Shah addressed the opening session of the BJP National Executive Meet in Delhi on 25 September, 2017 and criticized Congress Vice-President Rahul Gandhi’s comment of ‘dynasty being a part of India’ and said it is only the tradition of the Congress. Shri Shah condemned the politics of violence being carried out in Kerala and planned protests in the state. He also talked about Prime Minister Shri Narendra Modi’s vision of ‘New India’.

In his opening remarks, Shri Shah took a dig at Congress Vice- President Rahul Gandhi’s statements in Berkeley University, where he said that our country was running on dynastic politics. Shri Shah said, “Dynasty or family connection in launching careers is a tradition of the Congress and not of India”.

BJP National President said the current President, Vice President and the Prime Minister had reached their position due to their hard work, despite their humble origins.

He said BJP vehemently opposes this politics of violence. We will be conducting padyatras in Kerala to condemn the violence that was seen in the recent times, he added.

Shri Amit Shah said that from October 03-17 BJP workers will do a ‘Padyatra’ in Kerala and connect with the people. The entire party will be working for the coming years on nation-building.

He further said the UPA regime was riddled with corruption. The Congress party didn’t take a single step towards ensuring that black money stashed abroad was brought back. He said no corrupt person will be spared.

On the occasion he said 70 years post-Independence, India is still struggling under a lot of challenges. The BJP President has appealed everyone to stand by PM Shri Narendra Modi’s agendas on Clean India and New India.

He said, “We hope a new India is created under this same leadership in 2019”.

Shri Shah said the economy was stronger under this government than it was under the UPA and cited figures to make his point.
He also praised the Central government over its handling of Naxalism and terrorism, saying more terrorists were killed in its three years of rule than any other spell of three years.

-He said President, Vice-President, Prime Minister reached their position due to performance.

-He said the BJP believes in the politics of performance while the Congress banks on the “politics of appeasement and dynasty”
BJP to launch 15-day padyatra in Kerala from 3 October to protest political violence against its workers.

-BJP will register a historic win in upcoming Gujarat polls.

-The Govt is relentlessly working in the interests of the poor.

-BJP president Amit Shah has urged all party workers to connect with the people to realize the dream of New India.