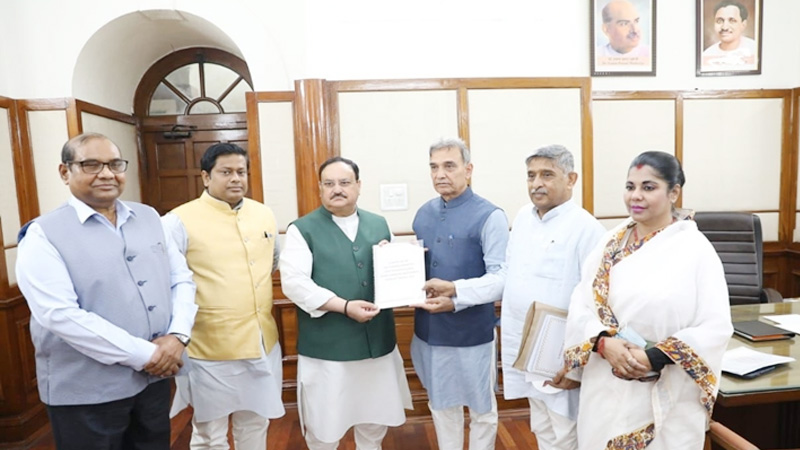 Bharatiya Janata Party expressed its deep anguish and sorrow over the ongoing violent incidents in Rampurhat, Birbhum and demanded strict action against the accused, give relief to victims and to strengthen the law and order situation in the area from the West Bengal Government.

After receivinng the report on 30 March, 2022 BJP National President Shri JP Nadda appreciated the role played by the Fact Finding Team in trying circumstances. Shri Nadda reiterated about the mandate of the party to work for truth, justice and overall welfare of the people irrespective of caste, creed and community.

In this regard, BJP National President Shri Jagat Prakash Nadda had nominated a five members facts finding committee to visit the affected site, collect all the evidences and submit to the report at its earliest.

Following ware the members of the committee:

MAIN FINDINGS OF THE REPORT OF FACT FINDING TEAM ON BAGTUI CARNAGE:

1. Under Trinamool Congress leadership, Mafia is ruling West Bengal in connivance with police and political leadership. The law and order machinery has totally collapsed.
2. The law abiding citizens of West Bengal have lost faith in the Government and the mode of governance by the TMC as officers themselves have become cogs in the TMC hierarchy.
3. The carnage in Bagtui village is the outcome of State-sponsored extortion, goonda tax, cut money, tollbazi and also the rivalry among its illegal beneficiaries.
4. Chief Minister of West Bengal decided to visit the spot only after the BJP’ Fact Finding Team has already reached Kolkata.
5. Because of the ‘forced’ CM’s visit, the Fact Finding team was prevented and its journey was thwarted by the TMC goons who were bent upon assaulting the Fact Finding Team.
6. Not even single officer/constable of West Bengal Police were visible, nobody came to the rescue of the Fact Finding team when they were attacked and clear the passage for the committee to visit the scene of offence. Our efforts to contact the DGP and other officers failed.
7. It is learnt that the SDPO and the Inspector of Police were present close to the scene of offence, but they did not bother to visit the spot even when they were kept informed. They even failed to allow the fire tenders to reach the place to put off flames. Their timely intervention could have saved precious lives.
8. Local residents have deserted their homes fearing threat to their life and property. In view of this, it is recommended that NHRC, National Commission for Women and Child Rights to visit Bagtui village and instill confidence- building measures for early return of people to their respective homes in the village.
9. We strongly recommend that All India service Officers serving in West Bengal be made to realize their constitutional obligations and the Centre should strongly caution them.