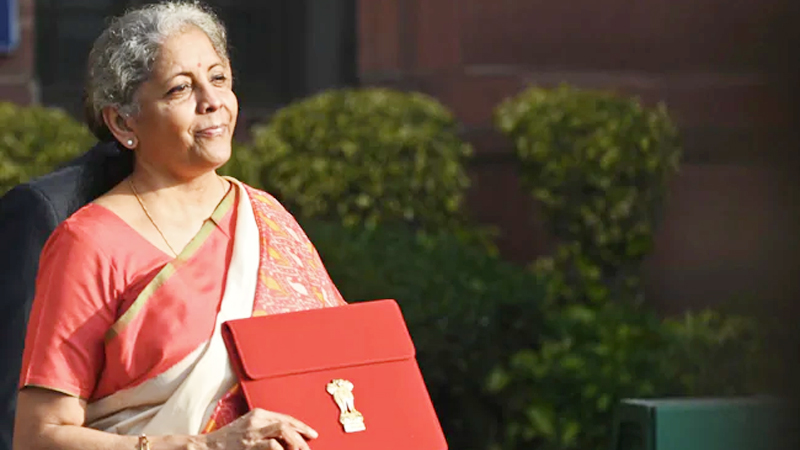 Union Finance Minister Smt. Nirmala Sitharaman has presented the 2021-22 Union Budget in the backdrop of once in a century pandemic. However, by presenting a historic Budget for Aatmanirbhar Bharat she has surprised many. In a conversation with Kamal Sandesh Associate Editors Ram Prasad Tripathy & Sanjeev Kumar Sinha, Smt. Nirmala Sitharaman explained at length on some of the key highlights of the Budget and revealed that how the central government led by Hon’ble PM Shri Narendra Modi wanted to give a boost to public expenditure for creating roads, ports, infrastructure for Agriculture, Health, Education and to accelerate the overall development of the country. She said this Budget lays out various measures to provide ‘Ease of Living’ to every citizen and also stands in support of country’s wealth creators. Excerpts of the conversation:

You have presented this Budget in the backdrop of a once in a century Coronavirus pandemic. After the pandemic, everyone was apprehensive about what the Budget 2021-22 would bring. However, this all-inclusive Budget for Aatmanirbhar Bharat has surprised many. What’s the central objective you wanted to achieve with this Budget?


The central objective of the budget stands on six pillars. First, ‘Health and Wellbeing’. We have taken a holistic approach to Health, focussing on strengthening three areas: Preventive, Curative, and Wellbeing, which also includes cleanliness and control on pollution. Second is ‘Physical & Financial Capital and Infrastructure’. We will create institutional structures, monetize assets, and enhance the share of capital expenditure in central and state budgets, to ensure robust infrastructure financing. Expenditure on infrastructure will ensure comprehensive growth through its multiplier effect.

Third being ‘Inclusive Development for Aspirational India’ includes steps taken to boost farmer income, develop fisheries, and ensure financial inclusion for all. This also includes securing the well-being of migrant workers and labourers through steps like a dedicated portal that will collect relevant information on gig, building, and construction-workers among others to help formulate Health, Housing, Skill, Insurance, Credit, and food schemes for labourers. The fourth pillar is ‘Reinvigorating Human Capital’. Here we ensure that all sections of the society get equal opportunity to contribute to New India’s growth story- scheduled castes, scheduled tribes, youth, etc. This focuses on providing equal education opportunities and skilling facilities to all.

‘Innovation and R&D’ is the fifth pillar. This, among other things, includes the launch of the National Research Foundation with an outlay of Rs 50000 crore for strengthening the overall research ecosystem of the country with focus on identified national-priority thrust areas. Sixth and the last one ‘Minimum Government and Maximum Governance’, which has always been the motto of the government under the leadership of the Hon’ble Prime Minister Modi, lays out various measures to provide ease of living to the citizens without much interference from the government, be it by setting up more tribunals in order to ensure faster delivery of justice or taking steps to improve ease of doing business for companies dealing with CPSEs.

It was a very bold step to increase the Health Budget phenomenally. There was also a separate allocation of Rs. 35,000 crore for the Covid vaccine. Do you think this huge allocation will transform the health sector and its infrastructure?

Yes, because the approach that we have adopted towards health is a holistic one. As mentioned earlier, the focus is on strengthening three areas: Preventive, Curative, and Wellbeing. This includes emphasis on nutrition as well, with adoption of an intensified strategy to improve nutritional outcomes across 112 Aspirational Districts. Keeping in mind WHO’s recommendation, this budget gives importance to ensuring clean water, sanitation, and clean environment, as a prerequisite to achieving universal health. For this purpose, we are launching The Jal Jeevan Mission (Urban) that aims at universal water supply in all 4,378 Urban Local Bodies, as well as liquid waste management in 500 AMRUT cities. The Urban Swachh Bharat Mission 2.0 will be implemented with a total financial allocation of Rs 1,41,678 crores over a period of 5 years. In addition, an amount of Rs 2,217 crores has been provided to tackle air-pollution for 42 urban centres with a million-plus population.

What is the thought behind the announcement of mega textile parks and huge Budget allocation for infrastructure? How is it going to bring the much awaited solution to the huge labour migration problem from certain states and create jobs?

With the PLI scheme, we are strengthening the key industries where we see great potential. Textile is also one such industry. We want to make the industry globally competitive and attract investments through the proposed Mega Investment Textiles Parks. Employment generation is a key goal behind this. By spending on infrastructure, we want to invest in creation of assets such as roads, ports, etc. It is going to have a multiplier effect. It would increase demand in core industries such as cement, steel, power, etc. This, in turn, would generate employment. While an infrastructure project takes a few years to complete, the jobs are generated immediately. Since the ongoing and announced infrastructure projects are spread across various states, labour from all the states is set to gain from the employment opportunities that will be created.

This year’s Budget has many things to boost the Agriculture sector and Agri infrastructure. Is the opposition to agriculture reforms a deterrent?

The government has taken the opposition on board in its continued reform of the agriculture sector. In fact, the government is implementing reforms the Congress party itself said it would do if it won! Congress said in its 2019 Manifesto that it would repeal the APMC Act and make trade in agricultural produce — including exports and inter-state trade — free from all restrictions.

Since 2014, we have initiated changes in the agriculture sector aimed at empowering the farmer. The crop insurance scheme was changed to make it more farmer-friendly. The PM-KISAN scheme was also brought in. The government has repeatedly invited dialogues on the three Farm Laws. So far, 12 rounds of talks have been completed and the government is open for more. The Agriculture Minister has said that he is ready to go over the Farm Laws clause by clause. That is the level of consultation the government is doing.

Early this year, Hon’ble Prime Minister had launched the SWAMITVA Scheme. Under this, a record of rights is being given to property owners in villages. Up till now, about 1.80 lakh property-owners in 1,241 villages have been provided cards. In the Union Budget, this was extended to cover all States/UTs during FY22.
To provide adequate credit to our farmers, agricultural credit target has been enhanced to Rs 16.5 lakh crores in FY22. The allocation to the Rural Infrastructure Development Fund was also increased from Rs 30,000 crores to Rs 40,000 crore. The Micro Irrigation Fund was doubled.

The scope of ‘Operation Green Scheme’, which was applicable to tomatoes, onions, and potatoes, has been enlarged to include 22 perishable products. Further, in the Budget, 1,000 more mandis will be integrated with e-NAM.

The Agriculture Infrastructure Fund would be made available to APMCs for augmenting their infrastructure facilities. Substantial investments have been announced in the development of modern fishing harbours and fish landing centres. The government will develop inland fishing harbours and fish-landing centres along the banks of rivers and waterways.

As I had stated in the previous Budget and as the government has shown throughout the last year and in this Budget, this government stands in support of the country’s wealth creators. During COVID, the government offered emergency credit for MSMEs in the form of the Emergency Credit Line Guarantee Scheme, through which more than Rs 2 lakh crore of emergency credit has been sanctioned. Apart from that, the government provided Rs 20,000 crore of subordinate debt for stressed MSMEs. One of the biggest benefits for start-ups arising out of the changes made in the Aatmanirbhar package is the change in the definition of MSMEs. One of the major changes announced was that India-registered companies can now hold initial public offerings on notified global exchanges, thus allowing Indian start-ups to now access capital in public and private markets on a global level.

The overall emphasis of the government to reduce its reliance on defence imports creates huge opportunities for Indian companies, including new entrants. The 74% FDI limit also makes it easier for new ventures to raise capital from global investors. The government is also pushing for technological innovation to be the driving force behind the country’s national security and defence preparedness, creating opportunities for new companies to establish themselves in this newly opening up field. At a time when India is already a well-established name in the space sector, the government’s decision to allow private participation opens up avenues of cutting-edge innovation and new companies making their mark in the sector.

After this historic Budget, how do you see economic recovery as well as the much awaited great leap for Indian economy? How Hon’ble PM’s vision of Aatmnirbhar Bharat is set to position Indian economy globally?

The Indian stock market gave thumbs up to Union Budget 2021, with the BSE benchmark Sensex rising over 2,000 points in intraday trade and NSE Nifty breaching 14,000 levels. Most high-frequency indicators of the economy have not only turned positive, but they have reached levels higher than pre-COVID. GST collections came in at Rs 1.19 lakh crore in January 2021, the highest ever collection. This came on the back of Rs 1.15 lakh crore collected in December 2020, which itself was the previous highest collection. India’s manufacturing industry started 2021 on a strong note with the Manufacturing Purchasing Managers Index (PMI) for January coming in at 57.7, the strongest improvement in three months. The Manufacturing PMI in December 2020 and November 2020 came in at 56.4 and 56.3, respectively.

Petroleum consumption in December 2020 stood at 1.85 crore MT, which is about the same level achieved last year. Railway freight traffic grew 8.5% in December 2020 compared to December 2019. UPI payment transactions hit an all-time high of Rs. 4.31 lakh crore in value and 230 crore in volume terms in January 2021. This is nearly double in terms of value and volume compared to January 2020. The Economic Survey estimated growth to be 11% in FY22. The RBI’s survey points towards improvement in capacity utilisation in the manufacturing sector to 63.3% in Q2:2020-21 from 47.3% in the preceding quarter. Foreign Direct Investment and Foreign Portfolio Investment to India have surged in recent months, reposing faith in the impressive recovery in the Indian economy.

As a sign of growing international confidence in the Indian economy, the International Monetary Fund has said it projects a 11.5% growth rate for India in calendar year 2021, the only country with double digit growth.