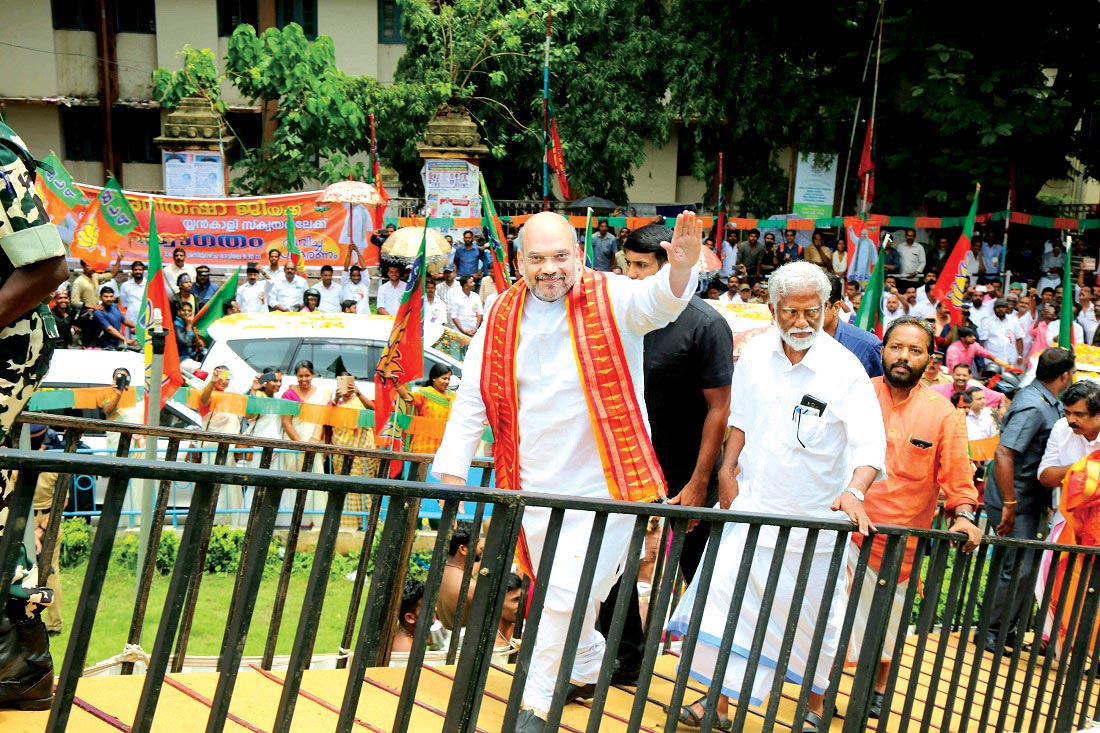 BJP National President Shri Amit Shah arrived in Kochi for his three-day Kerala Pravas on 02 June, 2017. After his arrival at the Nedumbassery International Airport, Shri Shah got a rousing reception from BJP workers. He proceeded to a government guest house in Kochi accompanied by a bike rally organised by party workers.

Shri Shah began his Kerala Pravas with garlanding the statue of social reformer and Dalit leader Ayyankali. On the same day he met the Christian Bishops in Kochi. The focus of this meeting was to understand the problems of the community. Besides interacting with party leaders over organizational work and future plans for BJP in the state, Shri Shah also held meetings with BJP allies, leaders of various communities and influential people.

Meeting with heads of Churches

On the first day of his three-day tour to Kerala, BJP President met heads of Churches in Kochi. Syro-Malabar Catholic Church’s Cardinal Mar George Alencherry, Latin Catholic Church Archbishop Joseph Kalathiparambil and representatives of three non-Catholic Christian Churches had a 40-minute meeting with Shri Shah on a church premises in Kochi. Later interacting with media persons, Fr Jimmy Poochakkat, Syro- Malabar Church spokesperson, said the meeting did not discuss any political issue; it was only a courtesy call. He said the heads of the churches wanted the Union Government to intervene in securing the release of Fr Tom Uzhunnalil who was kidnapped in Yemen last year. Besides, they took up the crisis being faced by rubber farmers and the demand for formation of a fisheries ministry to address the issue of fishermen, he said. He said Shri Shah promised action on the issues raised by the bishops and told them the NDA government takes care of every section of society.
Meeting with office Bearers of BJP

Later addressing the Office Bearers of the party Shri Amit Shah said, “I reached Cochin for my three-day ‘Vistrut Pravas’. I thank the people of Kerala, the land of Adi Shankaracharya, for such a rousing welcome. The energy and enthusiasm for BJP among people of Kerala is a sign of trust in BJP and yearning for change from the LDF, UDF governments.”
Shri Shah underlined the need to work at the grassroots level. BJP is determined to win from Kerala in the next elections. The focal point of discussion was to expand and strengthen the NDA at the grassroots level in Kerala.

BJP allies BDJS of Hindu Ezhava leader Vellappally Natesan and Janandhipathiya Rashtriya Sabha of tribal leader C K Janu also raised their demands with Shri Shah. Shri Shah told them to sort out the problems in the near future.

BJP President Shri Amit Shah on 03 June held a series of meetings with office bearers of the party and as part of efforts to strengthen the party base in Kerala ahead of the 2019 Lok Sabha polls. Addressing the Karyakartas he raised the issue of frequent attacks on BJP cadres by CPI(M) in Kerala. Shri Shah said the growth of BJP cannot be stopped by violent means.
Shri Shah said the southern state was important in the BJP’s strategy for the 2019 Lok Sabha election. He said the BJP, which had won several Assembly polls in the country after the 2014 Lok Sabha election, would not be fully satisfied till it tasted victory in the Kerala Assembly polls.

Shri Amit Shah ended his three-day visit to the state by unleashing a scathing attack on the Left parties and galvanizing support from all sections for the party’s bid to win in the next assembly election.

He said it had been noticed that violence against BJP and Sangh Parivar members goes up whenever the Left parties come to power. After the Left government came to power in Kerala, 13 BJP, RSS workers have been killed. Most of the deaths have occurred in the chief minister’s constituency in Kannur. He said BJP will emerge stronger from such setbacks.

Shri Amit Shah said that BJP will come to power in the state after four years. He asked the party’s elected representatives to work tirelessly to achieve this goal. Given the speed of the party’s growth in the state, BJP will come to power, he said.
On the last day of his visit in Kerala, he chose to have breakfast from a booth level worker’s house at Thiruvananthapuram, raised organizational issues with party leaders and talked about the Modi government’s contribution to Kerala’s growth during a meeting with a large gathering of invited guests.