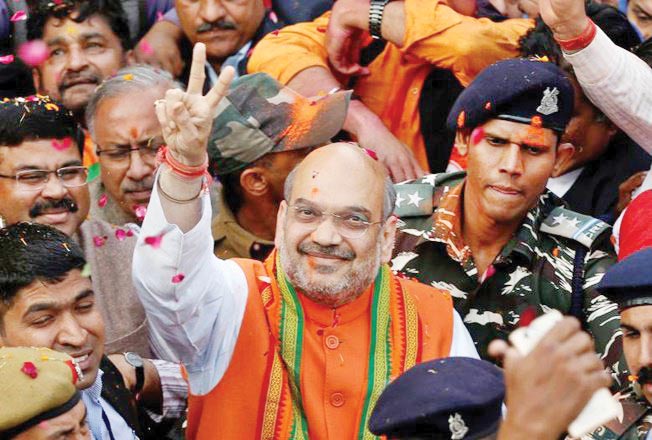 Bharatiya Janata Party National President Shri Amit Shah, while speaking to media in Kolkata, West Bengal congratulated BJP on the thumping win in MCD elections in Delhi. He said that the result in Delhi is another push in BJP’s victory march. He also took a dig at Delhi CM Arvind Kejriwal and the AAP government. Shri Shah said that the results show that it is an end of politics of negativity. He added that BJP’s welfare politics of ‘sabka saath’ has won over the politics of blame game and excuses.
Shri Shah also thanked the people of Delhi for showing faith in BJP and said that the results are like a stamp of approval on the three years of work done by PM Shri Narendra Modi in the country. Shri Shah also congratulated Shri Manoj Tiwari and other party workers in Delhi.

The BJP National President said the people of Delhi have rejected the negative politics and put their seal of approval on Prime Minister Narendra Modi’s ‘Sabka Saath, Sabka Vikas’ programme.

Shri Shah said, “Our opponents were expecting the winning run of Prime Minister Narendra Modi to come to a halt in Delhi, but due to the hard work and passion of the party workers, a massive victory was secured. Our main target was not the MCD polls. This victory has laid the foundation for the BJP to form the next government in Delhi”.

Expressing gratitude to the people of Delhi, Shri Shah said “In MCD’s three municipal bodies, they have given us the victory with unexpected majority.”