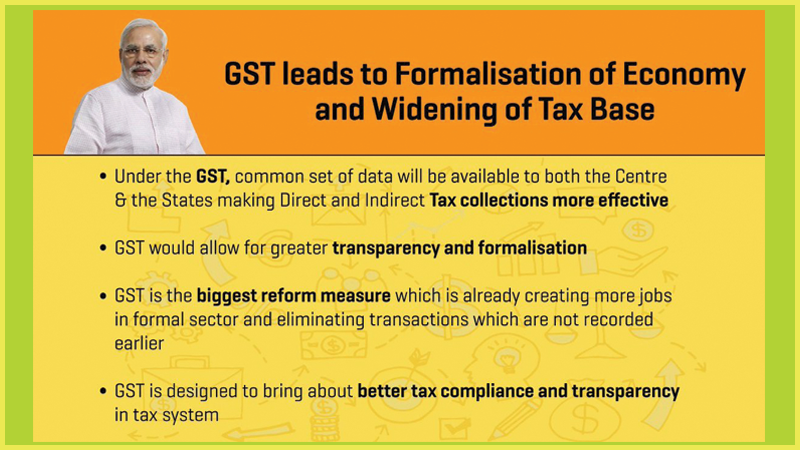 The Historic tax reform, Goods and Service Tax (GST), has resulted in formalization of economy and consequently information flow would eventually augment not only the Indirect Tax collections but also Direct Tax collections. In the past, the Centre had little data on small manufacturers and consumption because the excise was imposed only at the manufacturing stage while the States had little data on the activities of local firms outside their borders. Under the GST, there will be now seamless flow of availability of common set of data to both the Centre and the States making Direct and Indirect Tax collections more effective.

There are early signs of tax base expansion. Between June and July 2017, 6.6 lakh new agents, previously outside the tax net, sought GST registration. This is expected to rise consistently as the incentives for formalization increase. Entire Textile chain is now brought under tax net. Further, a segment of land and real estate transactions has also been brought into tax net “works contracts”, referring to housing that is being built. This in turn would allow for greater transparency and formalization of cement, steel and other sales which earlier tended to be outside the tax net. The formalization will occur because builder will need documentation of these input purchases to claim tax credit.

The introduction of GST, a common Indirect Tax for both the States as well as the Central Government with its end to end digitization of all processes, is the biggest reform measure which is already creating more jobs in formal sector and eliminating transactions which are not recorded earlier in the books of accounts and thus, were outside the tax net so far. GST is designed to bring about better tax compliance and transparency in tax system. It is putting a premium on honesty. It would make increasingly difficult for those (who are liable to pay tax) to remain outside the tax net.

In order to simplify the processes a number of procedural changes have also been introduced by the Central government since the roll-out of GST on 1st July, 2017. An extensive exercise was undertaken for tax payers education and facilitation by way of knowledge sharing, dissemination of information and replies to FAQs among others. Further, steps are also being undertaken for further simplification in order to facilitate the tax payers and to extend benefit to the customers.