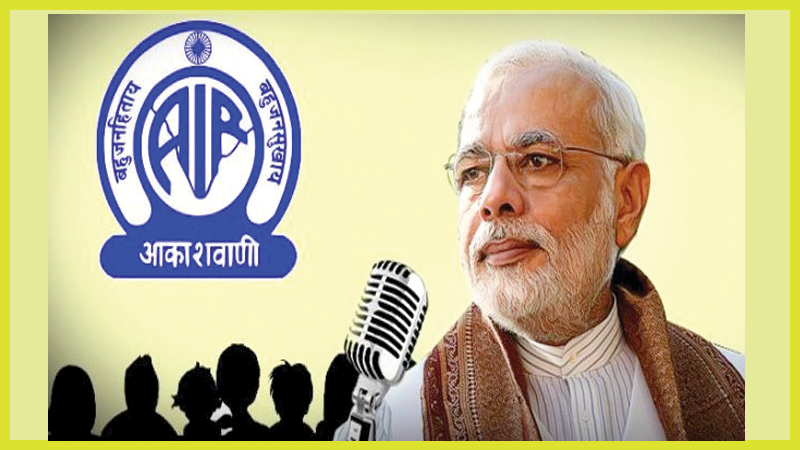 Prime Minister Shri Narendra Modi in his monthly radio programme ‘Mann Ki Baat’ interacted with the nation. In this episode Prime Minister Shri Modi appreciated Indian cricket team for their sportsman spirit and sportsmanship during test match with Afghanistan. He also discussed how GST curbed the inspector raj in taxation. Here,we are giving excerpts of the interaction for our esteemed readers :

I’m fortunate once again to be face to face with you in the ‘Mann Ki Baat’ programme. Just a few days ago, a historic Cricket match took place in Bengaluru. Of course you must have realized that I am referring to the test match between India and Afghanistan. It was Afghanistan’s first international match and it’s a matter of honour for us that this historic match for Afghanistan was played with India. Both teams performed par excellence. Besides, bowler Rashid Khan had performed exceedingly well in the IPL earlier this year. I remember Afghanistan President Shriman Ashraf Ghani’s words on Twitter tagging me along “The people of Afghanistan are extremely, proud of our hero Rashid Khan. I’m also thankful to our Indian friends who created a platform for our players to showcase their skills”. Rashid represents what constitutes the best of Afghanistan. He is an asset to the world of cricket. Then he quipped “No, we are not giving him to anyone!” This match will remain etched in our memories for a long time. Anyway, being the first match, it is naturally memorable, but I will cherish it for a special reason. The Indian team did something that is exemplary to the whole world. What does a winning team do while receiving the trophy? The Indian team, while receiving the trophy, warmly invited the Afghanistan team which had played its first international match to pose together for photographs. This incident exemplifies the very spirit of sportsmanship.

My dear countrymen, this 21st of June, the fourth Yoga Day presented the rarest of sights. The whole world appeared as one entity. In the European Parliament in Brussels, at the UN headquarters in New York, on Japanese naval warships, there were sights of people performing yoga. Saudi Arabia witnessed its first, historic yoga programme and I am told many aasans were demonstrated by women. On the snow capped mountain peaks of Ladakh, Indian and Chinese soldiers performed yoga in unison. Yoga breaks all barriers of borders and unites people. Zealous citizens of hundreds of lands overlooked divisions of caste, religion, region, colour and gender to transform this occasion into a massive festival. If people from the entire world ardently participated in programmes on Yoga Day, why should India not feel elated many times over?

Many of you have urged me on Mygov and Narendra Modi app to mention Doctor’s Day, the 1st of July. You are absolutely right. We think of doctors only during times of distress. But this is a day when the nation celebrates the achievements of our doctors and expresses gratitude for their spirit of service and commitment towards society. We are a people who, by nature, revere the Mother as the equivalent of god since she is the source of our very existence, our life. On the other hand, there are times when it is the Doctor who gives us re-birth. The role of a doctor is not limited to mere treatment of ailments. Often a doctor plays the role of a family friend, a lifestyle guide. They not only cure but also heal. Today, doctors possess not just medical expertise; they have a vast experience on the co- relation between general lifestyle trends and their effect on our health. Indian doctors have carved a niche for themselves in the entire world through their capabilities and skills.

Very few people would also be knowing that in 1937, on the invitation of Dr. Shyama Prasad Mukherjee, Gurudev Rabindranath Tagore addressed the convocation in Kolkata University in Bangla. This was the first time under British rule that the convocation in Kolkata University had been addressed to in Bangla. From 1947 to 1950, Dr. Shyama Prasad Mukherjee was the first Industries minister of India and, in a sense, helaid a strong foundation for India’s industrial development, he had prepared a solid base, it was he who had prepared a stout platform. The first industrial policy of Independent India, which came in 1948, was stamped with his ideas and vision. Dr. Mukherjee’s dream was for India to be industrially self-reliant, competent and prosperous in every sphere. He had wanted India to develop heavy industries and also pay full attention to MSME, handloom, textiles and cottage industry.

For the proper development of cottage and small industries with finance availability and organizational setup- All India Handicrafts Board, All India Handloom Board and Khadi & Village Industries Board were established between 1948 and 1950. There was also a special emphasis by Dr. Mukherjee on indigenization of India’s defence production, in the establishment of four most successful mega projects- Chittaranjan locomotive works factory, Hindustan aircraft factory, Sindri fertilizer factory and Damodar Valley Corporation and other river valley projects, Dr. Shyama Prasad Mukherjee contributed significantly. He was very passionate about the development of West Bengal. It was the result of his understanding, prudence and activism that a part of Bengal could be saved and it is still a part of India.

In far-distant villages, daughters are providing services ranging from pension to issuance of passport to senior citizens through the aegis of common service centers. Asister from Chhattisgarh collects custard apple and does business by making its ice cream. Like Anjan Prakash in Jharkhand, many lakhs of young besides running the Yuva – Jan Aushidhi kendras in the country are providing affordable medicines in the nearby villages. At the same time a young man from West Bengal desperately seeking a job two to three years ago is now a successful entrepreneur ; And not only this he is providing employment to ten to fifteen people. Whereas young school students from Tamil Nadu, Punjab, Goa are working on an important topic like waste management in their school’s tinkering lab. I just do not know how many such stories were shared with me, there wasn’t a single corner of the country where people did not have a success story of theirs to share with me. I am glad that in this entire programme I witnessed the accomplishments of the common man more than the achievements of the government, of the country’s power, the power of New India’s dreams, the power of the resolve of the new India – this is what I experienced!

GST is not only the victory of integrity but it is also a celebration of honesty. Earlier, in the case of taxation and allied affairs in the country, there were rampant complaints of Inspector Raj. In the GST scheme,information technology has replaced the inspector. Everything from return to refund is done through online information technology. ..It is generally believed that such a big tax reform, in a huge country like ours with such a large population takes 5 to 7 years for effective adoption. However within a year, the enthusiasm of the honest people of this nation, the celebration of integrity in the country and the participation of people resulted in this new tax system managing to create a space for itself, has achieved stability and according to the need, it will bring reform through its inbuilt arrangement. This is a huge success in itself which 125 crore Indians have earned for themselves.