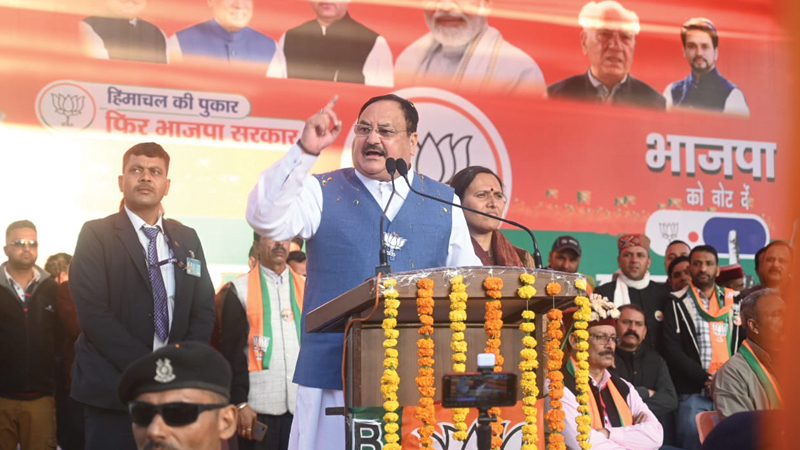 Shimla
‘BJP CONTRIBUTED TO THE WELL-BEING OF COMMON PEOPLE’

He said, “The Congress government constantly tried to mislead the common people. In Himachal, there is an attempt to ask for votes in the name of the family. This mentality tells that the candidate is supported by crutches. They are not worried about the development of the state; they are only worried about themselves.”
The BJP National President also said that the schemes introduced by BJP have contributed to the state’s development and to the well-being of the common people. The Himachal BJP government has provided health coverage to the people of Himachal under the Ayushman Yojana. He also said that BJP has already applied for four loans for the development and installing of tunnels in the state.

BJP National President Shri Jagat Prakash Nadda while addressing a public rally during Vijay Sankalp Abhiyan in Sandhol, Mandi on 05 November, 2022 said Congress is craving power only because it has become unemployed after remaining away from power for a long time.

He said BJP works in the mission mode but Congress works for commission and corruption. “Congress is not craving power to serve the people of Himachal but only because the throne was out of its reach and now it is unemployed,” he said.

Ahead of the upcoming Himachal Pradesh elections, BJP National President Shri JP Nadda addressed a public rally in Chamba on November 03, 2022. Speaking at the rally, he said the people of the hill state have decided to change the “rivaaj” (tradition) not “raj” (power) in the polls.

“Himachal Pradesh was a special category state but this was taken away during former CM Virbhadra Singh’s time,” the BJP National President noted.

On November 02, Shri JP Nadda addressed a rally in Bilaspur and urged voters to form a BJP government in the state again. “Mitti Ka Haq Ada Karna Hoga,” he added.

Hitting out at the former UPA government, Shri Nadda said, “It has been 75 years of independence. Who used to care about us? During the time of UPA government, Prime Minister used to come here for political tourism – never caring about or worrying about the state.” “Today, PM Shri Narendra Modi stands with Himachal Pradesh whenever called,” he added.