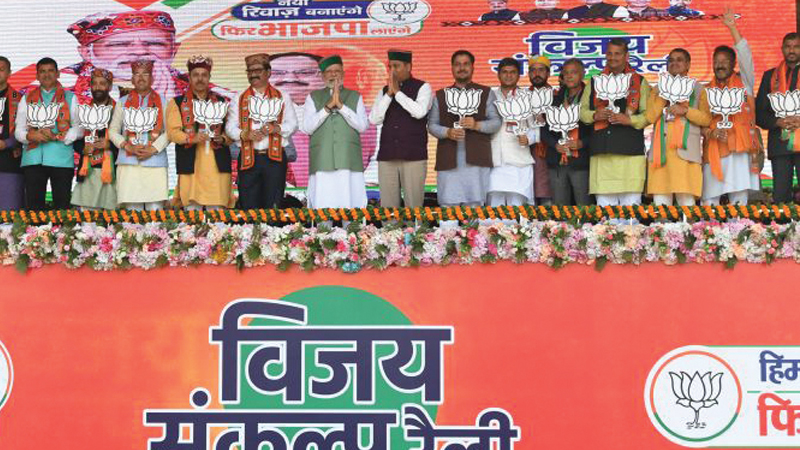 Shri Modi started his address at Sundar Nagar by highlighting his promise to the people of Mandi that he would address the first election rally from Mandi itself. PM Modi said that due to the extreme weather, he could not visit the people of Mandi in person earlier.

Shri Modi paid tributes to Shyam Saran Negi Ji, the first voter of independent India who had voted more than 30 times in his life.
Pointing out the importance of the current Himachal elections in the next 25 years of development, the PM said, “When India will celebrate 100 years of its independence, Himachal will also complete 100 years of its establishment. In these years of Amritkal, rapid development is necessary for Himachal, and stable government is necessary.”

Addressing the Solan rally on November 5, 2022 PM Shri Narendra Modi highlighted his deep connection with the state of Himachal. He reminisced about his days in Solan and Shimla, and told people how Himachal has always been on his mind.

PM Shri Modi further highlighted that he has been taking the handicrafts of Himachal to an international level.
Talking about how India has come out of an era of unstable governments, he said that it is imperative that even the smaller states should now aspire towards stable governments in order to take development to the next level. Shri Modi gave examples of how Uttrakhand, Goa and Manipur have elected stable BJP governments to increase the pace of development.

Shri Narendra Modi talked about how the entire area from Solan to Shimla is being developed as an educational and medical hub. He further added that AIIMS Bilaspur has also strengthened medical tourism in the country.
Shri Modi also slammed the Congress for not delivering on any of their promises especially those made to the small farmers of Himachal. He told people how the double-engine government provided urea to farmers at Rs. 270/kg when it was costing the government Rs. 2000/Kg.