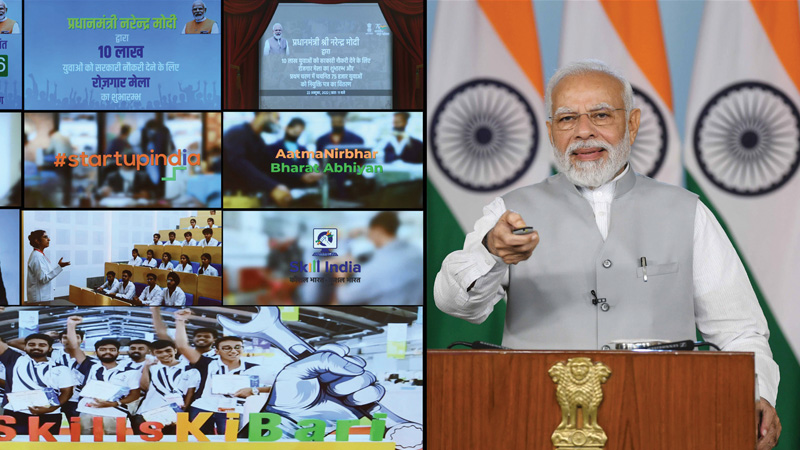 Addressing the appointees he said, “Today marks the day when a new link in the form of Rozgar Mela is being anchored to the employment and self-employment campaigns in the country that are going on for the last 8 years”. Shri Modi said that keeping in mind the 75 years of independence, the central government is giving appointment letters to 75,000 youngsters under a programme. “We decided that a tradition of giving appointment letters in one go should be started so that a collective temperament of completing projects in a time-bound way develops in departments”, he said explaining the rationale of the Rozgar Mela. In the coming days also, candidates will get their appointment letters from the government from time to time. “I am happy that many NDA-ruled and BJP-ruled states along with the Union Territories will also organise similar Melas”, he added.

‘Make in India’ and Atmanirbhar Bharat
The Start-Up India campaign, the Prime Minister pointed out, has established the potential of the youth of the country all over the world. The most ambitious project for the country in the 21st century has been the ‘Make in India’ and Atmanirbhar Bharat. Today, the country is moving from being a growing importer to a very large exporter in many respects. There are many such sectors in which India is moving fast towards becoming a global hub.

Prime Minister Shri Narendra Modi congratulated thousands of young candidates, who were given appointment letters in Gujarat for different posts in various grades on 29 October, 2022. The Prime Minister said similar Rozgar Melas will be organised in various states and Union Territories.

The Prime Minister, Shri Narendra Modi addressed the Jammu & Kashmir Rozgar Mela on 30 October, 2022. He said today marked an important day for the bright youth of Jammu & Kashmir. He congratulated all three thousand youth that received appointment letters to work in the government in 20 different places in Jammu & Kashmir. He informed that these youths will get opportunities to serve in various departments like PWD, Health Department, Food and Civil Supplies Department, Animal Husbandry, Jal Shakti, and Education-Culture.

Shri Modi underlined that it is our youth who will write a new story of development in Jammu & Kashmir thereby making the organisation of Rozgar Mela in the state, very special.

Remarking on the continuous development of Jammu & Kashmir the Prime Minister said, “For fast pace of development, we have to work with a new approach, with new thinking.”

Shri Modi said the government has decided to provide 75,000 jobs in a year in Maharashtra and around 2,000 people were given appointment letters on the occassion. There will be thousands of appointments in the Home department of Maharashtra alone and the rural development department of the state, he informed.

Shri Modi reiterated that in the Amrit Kaal the country is working on the target of developed India where youth will play a key role. He said, “The nature of jobs is changing rapidly in the changing times, the government is also constantly creating opportunities for different types of jobs.” He said Mudra scheme is giving collateral free loans to the youth and 20 lakh crore worth of loans have already been disbursed. Similarly, start-ups and the MSME sector are being supported in a big way. Youngsters in Maharashtra have benefitted from this, he added.