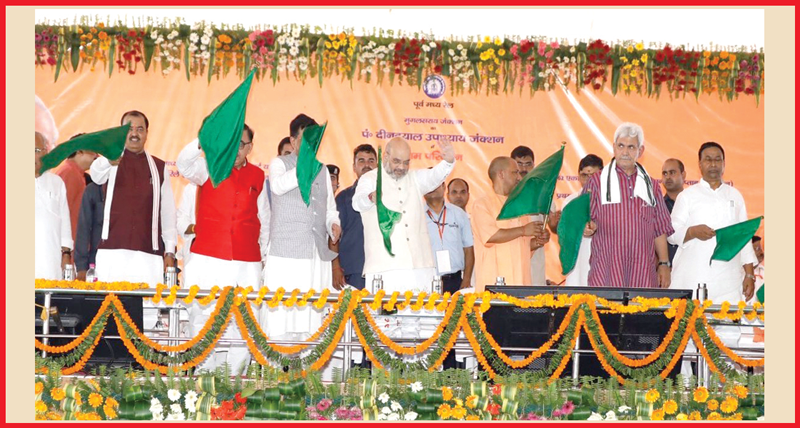 Shri Amit Shah said with the help of the Central Government and the UP Government is doing a big work of establishing a grand memorial and research center in memory of Pandit Deendayal Upadhyay Ji and for this I thank Prime Minister Shri Narendra Modi and Chief Minister of Uttar Pradesh Shri Yogi Adityanath from the bottom of heart.

Shri Shah said even if Rahul Gandhi joins the Bua-Bhatija (SP-BSP), yet the BJP’s seats in Uttar Pradesh will increase from 73 to 74, not 72. Opposition is dreaming of forming a new government in Uttar Pradesh but even today, only BJP has the UP’s mandate, no one else has.

I am asking Rahul Gandhi for past seven days that you must clear your stand whether ‘NRC’ should be implemented in the country or not, but he has no answer. Congress & Co do not want ‘NRC’ to be implemented and they Bangladeshi infiltrators should remain in the country to serve their politics of vote bank, Shri Shah said.

The SP, the BSP and the Congress should decide whether they want Bangladeshi infiltrators out of the country or not. I know the opinion of the people of the country, consensus of the whole country is that not a single infiltrator should be kept in the country.

The BJP President said the Modi government has spent more in 4 years for development of Purvanchal compared to 70 years’ of Congress. BJP government has opened this region to whole new dimensions of development.

He said in 15 years, under the rule of SP-BSP, UP’s law and order was extremely pathetic, criminals were dominating and the chaos was at the peak, while in the Yogi government, criminals in the state were forced to run away from Uttar Pradesh.

Shri Amit Shah said the Congress government of Sonia-Manmohan provided central assistance of just Rs 3,30,000 crore to UP during the 13th Finance Commission while the Modi government allocated an amount of Rs 8,08,000 in the 14th Finance Commission. Under the leadership of Prime Minister Shri Narendra Modi, the central government has decided to increase the minimum support price of crops by one and half times to the cost price, fulfilling the much anticipated demand of the farmers of the country for 70 years.

Even Modi Government has decided to provide health insurance of five lakh rupees per annum to 10 crore families i.e. approx 50 crore people of the country free of cost under the ‘Ayushman Bharat’

The Modi government has made crores of toilets, given gas connections to the poor women, provided electricity to the villages, build homes for homeless people, given self-employment to the youth, vaccinated 18 million poor children in 4 years, but Rahul Gandhi should tell the country what did the Congress party in 55 years of their rule, he asked.