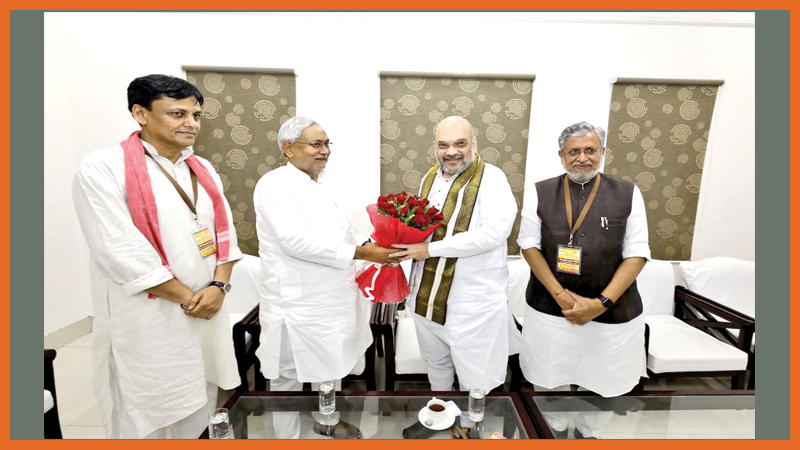 Bharatiya Janata Party National President Shri Amit Shah was accorded a splendid welcome by BJP leaders and workers in Patna, when he landed at the airport on 12 July, 2018 for two days Pravas in the state. He met Chief Minister Shri Nitish Kumar and other senior BJP leaders at the State guest house over breakfast. Later, he addressed party workers, booth-level in-charge. He also met party leaders in the evening to discuss the upcoming poll strategy. A large number of hoardings, posters and billboards with pictures of Party National President and State BJP leaders dotted the State capital to welcome him.
Later in the evening on the same day, he reached the official residence of Chief Minister Shri Nitish Kumar at 1, Anne Marg and had meetings with several leaders over dinner. This was Shri Amit Shah’s first visit to the State since the JD(U) formed the government in Bihar with the BJP in July 2017.

Addressing the party Karyakartas Shri Amit Shah urged the party cadres to reach out to voters and “make Narendra Modi Prime Minister once again”. He spoke about the political journey of the BJP since 1950. “Several leaders and workers have sacrificed their lives for the sake of our party. BJP started with just 10 members and now it has 11 crore members. The party rules in about 70% of the country and in 2019 too, it will come to power under NDA alliance with Narendra Modi as Prime Minister.”

He denied reports of a disagreement with the Janata Dal (United) over seat sharing for the coming Lok Sabha poll. “All speculation about differences with Nitish Kumar are unfounded. You can continue to speculate, but we’ll contest together and win all 40 seats in Bihar,” Shri Shah told a large congregation of party workers at Patna’s Gyan Bhavan. “We know how to honour and keep our alliance partners together. Every day media keeps writing about differences between us, but the alliance between Nitish Kumar and the BJP will win all 40 Lok Sabha seats in Bihar,” he said.

“When the Congress was in power for 10 years it had given Rs.1.93 lakh crore to Bihar, but the Narendra Modi-led NDA government gave Rs. 4.35 lakh crore in the last four years”, he said. “Our mission is that every citizen of this country gets a house by 2022. Every house gets electricity and toilet. But Rahul Baba, what have your four generations done in the last 55 years?”

In a meeting with party leaders Shri Shah said, “The NDA is united and strong in Bihar. We will contest the Lok Sabha election together and will win all 40 seats in the state”.