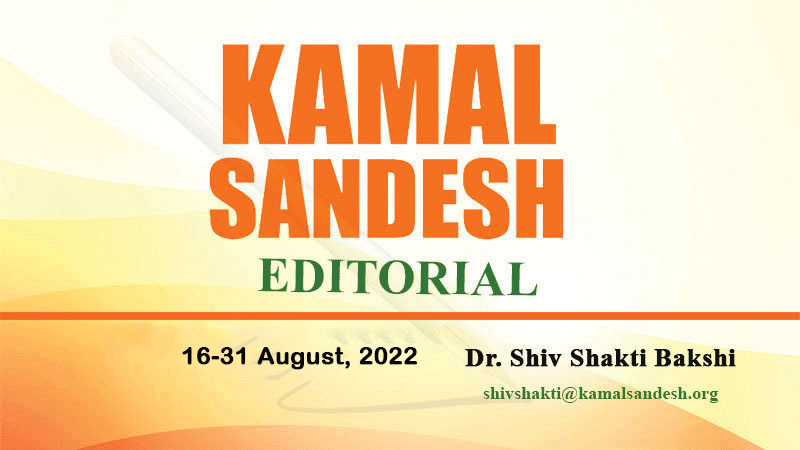 While the nation is celebrating ‘Azadi Ka Amrit Mahotsav, the ‘Har Ghar Tiranaga Abhiyan’ is renewing the commitment of the people in realising the goals of ‘Ek Bharat, Shreshtha Bharat’. As millions of people take to the streets, holding tricolours aloft and hoisting the national flag on their homes, a united India on the occasion of its 75th year of independence inspires everyone with renewed confidence, enthusiasm, and determination to build a “New India.” It is time to remember the sacrifices of our forefathers who fought tirelessly for freedom and dedicated their entire lives to restoring Bharatvarsha’s glory. It is time to again get inspired by the saga of struggle of the national heroes and take the pledge to fulfil the dreams of the great freedom fighters. It is time to be proud of centuries of past struggles, to remain unwaveringly committed to the high principles and ideals of the national movement, and to renew faith in the nation’s destiny as envisioned by this great civilization’s sages and seers. It is also a time to look back at the journey and the collective achievements of the nation amid all odds and adversities. It is also a time to count the disappointments and learn how even these disappointments have further strengthened our commitments and led us to the path of success. It is an occasion to rededicate, renew commitments, and celebrate!

As millions of people take to the streets, holding tricolours aloft and hoisting the national flag on their homes, a united India on the occasion of its 75th year of independence inspires everyone with renewed confidence, enthusiasm, and determination to build a “New India”

While the nation is celebrating ‘Azadi ka Amrit Mahotsav’, one can never forget the cost the nation had to pay for freedom from alien rule. While the nation got independence, the country was also partitioned due to the highly communal and separatist politics of the Muslim League in connivance with the Communists and the Britishers. The consequences were extremely painful as lakhs of people had to pay the price of partition through their lives. Millions were displaced from the lands of their forefathers and forced to migrate to distant places. During the partition, women, children, and the elderly were subjected to unspeakable miseries, violence, pain, and agony. It was the biggest tragedy in human history and it cannot be erased from the collective memory of the nation. Last year, the Prime Minister, Shri Narendra Modi, gave a call to observe ‘Partition Horrors Remembrance Day’ on August 14th every year. It is not only to remember the sacrifices of the millions, their pain and sufferings for generations and continuous agony, but to take lessons from the tragic history of partition. The nation should always remember the horrors of partition and make the younger generation aware of the consequences of highly communal, divisive and separatist politics in the country.

The occasion of ‘Azadi Ka Amrit Mahotsav’, while calling for celebrations, also reminds everyone of the responsibilities and the journey of the nation ahead. It is also a time to redeem the pledge to build a strong, prosperous and capable India which remains committed to the mantra of ‘Vasudhaiv Kutumbakam’ and the concept of ‘Vishwa Kalyan’. As the Prime Minister, Shri Narendra Modi, has made a call to the nation to dedicate completely to the ‘Amrit Kaal’ to build a ‘New India’ which is ‘Aatmnirbhar’, everyone has the responsibility to commit themselves to realising the full potential of the great nation. While the nation remembers the sacrifices of its heroes of the freedom struggle, and takes pride in the achievements of the 75 years of independence, the responsibility to take India forward in the ‘Amritkal, is on the shoulders of every Indian. The ‘Har Ghar Tiranga Abhiyan’ will undoubtedly rekindle the same fervour and enthusiasm that fueled the freedom struggle and will lead to the achievement of Amritkal’s goals. The tricolour is the pride of the nation. It inspires everyone to move unitedly in the service of Maa Bharati. Let’s hold our national flag high in every field.