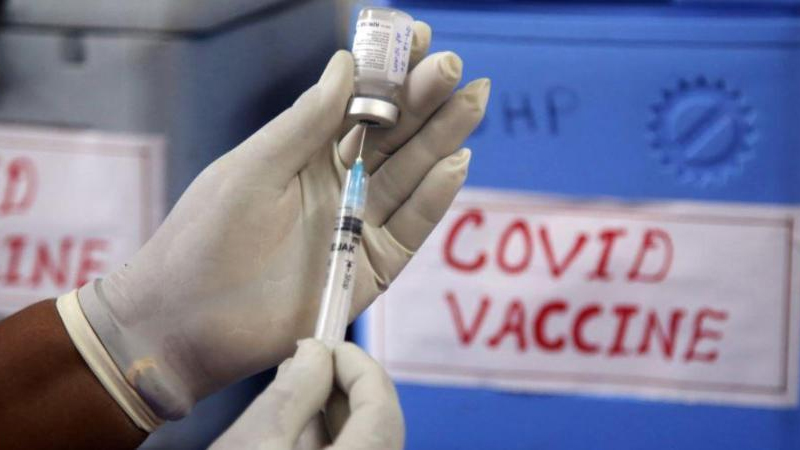 The most remarkable thing about this vaccination drive is that India is running this drive with two indigenously developed and produced vaccines. These vaccines are not only safe but have proven their efficacy in the world.

India has been successfully implementing the largest, fastest and free vaccination drive in the world. And we have many things to celebrate during this tremendous drive. Recently, on the birthday of our Prime Minister Shri Narendra Modi we have created a new world record by administrating 2.5 crore Covid-19 vaccination shots in a single day, which is highest vaccination given by any country in the world. Our grassroots-level healthcare system has delivered over 800 million vaccine doses so far. Over 200 million Indians are now fully vaccinated, and this is not the first time India has administered over one crore doses in a day, previously we have breached this mark successfully on the three occasions as well. It is believed that with current pace we will touch the 100 crore vaccination by next month.

During the pandemic period India discharged its duty as a responsible country and not only delivered medical equipment and essential drugs to 150 countries around the world but we have provided ‘Made in India’ vaccines to 95 countries around the globe. Apart from this India has also administered 180 million doses in the month of the August 2021, this number is greater than the vaccination number of all the G7 nation, which includes developed countries like United Kingdom, the United State of America, Italy, Germany, France and Japan. Indian states like Goa, Himachal Pradesh and Sikkim also joined the benchmark and administered single dose of vaccination to 100 percent of their eligible population. The most remarkable thing about this vaccination drive is that India is running this drive with two indigenously developed and produced vaccines. These vaccines are not only safe but have proven their efficacy in the world. 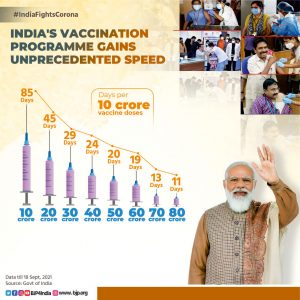 India has been able to achieve all these milestones only under the extraordinary leadership of Prime Minister Shri Narendra Modi. The mettle of the able leadership of Prime Minister Shri Narendra Modi has been proven on the world stage on various occasion and when Coronavirus struck in year 2020, we have seen many unprecedented measures which have been taken by the Indian. It is believed that pandemic like Covid-19 affect the humanity once in the hundred years and to deal with such situations we need out of box thinking and some extraordinary measures which showcase in each and every decision of PM Shri Modi. The launch of world’s largest, fastest and free vaccination program was one of those decisions. The Modi government has taken some major steps in term of protecting our population from the Covid-19 pandemic and one of these decisions was to start a free mass Covid- 19 vaccination drive with indigenously develop Covid-19 vaccines.

‘Made in India’ Vaccines

India has 17·7% (1·39 billion) of the world’s population, and vaccine production has therefore been a challenge for the country. But, Indian scientist have done commendable job in India’s vaccine journey. India’s vaccination program began with the emergency use authorization for two vaccines, namely the AstraZeneca-Oxford University ‘Covishield’, and indigenous ‘Covaxin’ developed by Bharat BioTech. Apart from these, authorities have given approval to Russia’s Sputnik V vaccine. Around 70 million Covishield doses and 10 million Covaxin doses per month were manufactured in India up to May, 2021. The monthly production capacity of Covishield is projected to be increased to more than 120 million doses and of Covaxin to around 58 million doses by December, 2021 to meet the requirements.

As Centre and state governments gave a major push to the vaccination drive against the coronavirus disease amid fears of an imminent third wave of the pandemic, three states and as many Union territories have achieved cent per cent inoculation of its entire adult population with at least one dose of the jab.

Himachal Pradesh was among the first states to have vaccinated all the eligible adults. The other states were Goa and Sikkim, while Dadra and Nagar Haveli and Daman and Diu, Ladakh and Lakshadweep have achieved the feat. 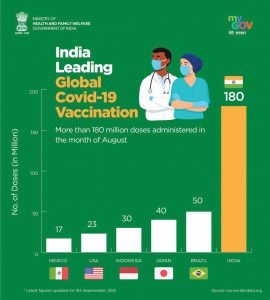 In another milestone, India administered more Covid-19 vaccine doses than all of G7 nations put together, the Union Health Ministry said on September 5. The ministry informed that over 18 crore (180 million) vaccine doses were administered in the month of August. This number is greater than the United State of America’s total vaccination in the month of August 2021 which stood at 23 million, France 13 million, Germany 9 million, Italy 8 million and United Kingdom 5 million. Canada administered 3 million doses and Japan 40 million doses in the two lowest and highest ranges, respectively, according to data tweeted out.

“Yet another achievement! With more than 180 million vaccine doses administered in the month of August, India leaves a mark on the Global map of leading its way in vaccinating its population on priority. #LargestVaccineDrive,” social media handle of MyGovIndia tweeted. The G7 nations included Canada, the UK, the US, Italy, Germany, France and Japan.

According data, more than 66.89 crore (66,89,80,635) vaccine doses have been provided to States and Union Territories so far through the government of India (free of cost channel) and through the direct state procurement category. Further, more than 1.56 crore doses (1,56,96,450) are in the pipeline. As part of the nationwide vaccination drive, the government of India has been supporting the States and Union Territories by providing them COVID vaccines free of cost.
India’s fight against the Covid-19 pandemic has been very successful so far and the vaccination drive have played a crucial role in this fight. India is not only producing vaccine for its citizens but also helping other countries on the humanitarian ground as well. As newer Indian vaccines get developed, India is hopeful that production capacity of existing vaccines will be ramped up further. And as our production increases, India has decided to resume vaccine supply to others too. This is the vision of Prime Minister Shri Narendra Modi who see the whole world as one family.

India Creates World Record on PM’s Birthday with 2.5 Crore Vaccinations
India administered over 2.5 crore Covid vaccinations in a day for the first time on September 17 on Prime Minister Shri Narendra Modi’s birthday. Earlier, the Prime Minister took to Twitter to declare that “every Indian would be proud of today’s record vaccination numbers” and thanked healthcare and frontline workers who had worked hard to make the vaccination drive a success. In the evening, as the country crossed the two crore-mark, the World Health Organization’s South-East Asia office tweeted its congratulations. Congratulations India for yet another milestone!” the global health body’s regional arm said.

The government’s tracker showed around 434 vaccinations per second, around 48,000 in a minute, or 15.62 Lakh per hour jabs has been administered on September 17. This push to the national vaccination campaign is at the core of the BJP’s three-week celebrations to mark the Prime Minister’s 71st birthday. To achieve its target, the BJP prepared health volunteers “to ensure maximum number of people get their COVID-19 vaccines on the day”. BJP National President Shri Jagat Prakash Nadda in a tweet said, “New World Record!

On Birthday of world’s most popular Prime Minister Shri Narendra Modi, a new record of giving more than 2.25 crore Covid vaccine doses has been set in the country today. Under the leadership of Modi ji, our health workers showed the power of India to the world through their hard work. Later in the evening Union Health Minister Shri Mansukh Mandaviya informed in a tweet that India has achieved the 2.5 crore vaccination mark and tweeted “Congratulations India!

On the birthday of Prime Minister Shri Narendra Modi India has created a history. We have written a golden chapter in the history of the country and the world by administering more than 2.5 crore vaccines.
The day is dedicated to the health workers.