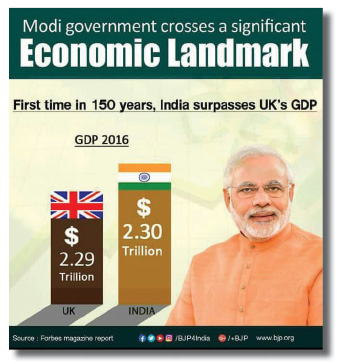 India`s economy will be larger than the UK’s, for the first time in 150 years, says a report published in Forbes magazine. The magazine says “This dramatic shift has been driven by India’s rapid economic growth over the past 25 years as well as Britain’s recent woes, particularly with the Brexit. Once expected to overtake the UK GDP in 2020, the surpass has been accelerated by the nearly 20% decline in the value of the pound over the last 12 months, consequently UK’s 2016 GDP of GBP 1.87 trillion converts to $2.29 trillion at exchange rate of GBP 0.81 per $1, whereas India’s GDP of INR 153 trillion converts to $2.30 trillion at exchange rate of INR 66.6 per $1. Furthermore, this gap is expected to widen as India grows at 6 to 8% p.a. compared to UK’s growth of 1 to 2% p.a. until 2020, and likely beyond. Even if the currencies fluctuate that modify these figures to rough equality, the verdict is clear that India’s economy has surpassed that of the UK based on future growth prospects.”