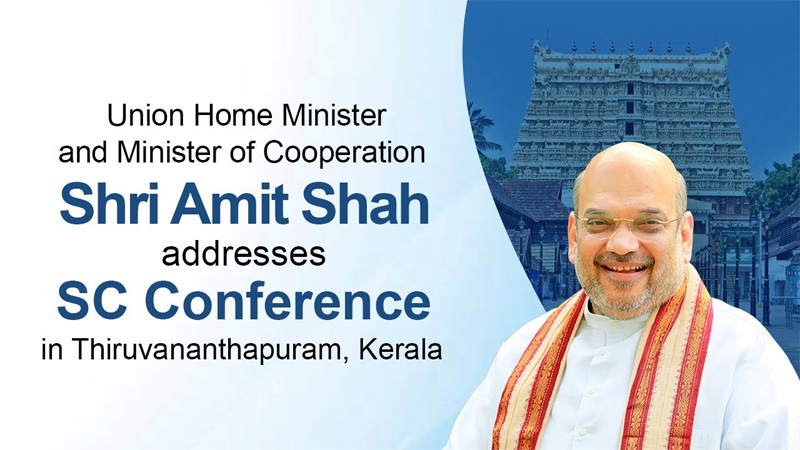 The Union Home and Cooperation Minister, Shri Amit Shah addressed the BJP Scheduled Caste (SC) conference in Thiruvananthapuram, Kerala on 03 September, 2022 and appreciated the works of Kerala BJP for organizing this grand convention. To work all over the country BJP needs only patriotism but to work in Kerala, it needs patriotism, sacrifice and bravery; so, I congratulate the workers of Kerala BJP, Shri Shah said.

Launching a scathing attack on Congress and Communists he said the communists and Congress party have never done anything for the welfare of the scheduled caste (SC) and tribes and treated them as vote-banks only. Therefore, except for Bharatiya Janata Party there is no hope for Kerala. “Congress is disappearing from the country; the world is getting rid of communist parties. If Kerala has a future, it is BJP” Shri Amit Shah added.

The Union Home Minister challenged Congress and the Communist parties to come forward and explain what they have done for the downtrodden communities so far. He also listed out the welfare schemes and policies of the Modi government for the Dalits, the SC and ST communities.

He further said, “We saw terrorists from Pakistan attacking our soldiers at Uri and Pulwama. The Congress never did anything about any such terrorist threats to this country. But PM Shri Narendra Modi gave them a befitting reply by conducting surgical strikes on Pakistan”.

Shri Amit Shah further said, “Dr. Ambedkar did not get Bharat Ratna until the Congress was in power. When they were voted out, Baba Saheb was awarded Bharat Ratna.” The Central government led by PM Shri Modi also renovated and constructed the ‘Panch Teerth’ in the memory of Baba Saheb Dr. Ambedkar.