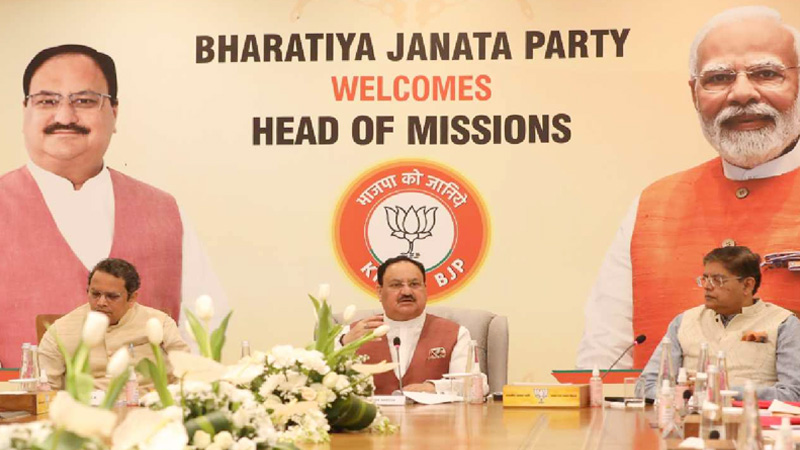 BJP PRESIDENT’S INTERACTION WITH HEAD OF MISSIONS TO INDIA

The Bharatiya Janata Party National President Shri Jagat Prakash Nadda 06 April, 2022 interacted with the Head of Missions to India of 13 countries including the European Union at the party headquarters 6A, DDU Marg, New Delhi. The interaction is part of the “Know BJP” campaign which was started on BJP foundation day. Shri Nadda told the Heads of Missions about the Bharatiya Janata Party’s rich history, the significance of the party organization and its expansion programme.

The idea behind the “Know BJP” campaign is to inform dignitaries about the party’s ideology and programmes, besides the journey of India’s development under Hon’ble Prime Minister Shri Narendra Modi in his eight years running the government.

The in-charge of the party’s foreign department Dr Vijay Chauthaiwale welcomed the Heads of the Missions in the BJP headquarters. A documentary on the Bharatiya Janata Party’s journey since 1951 was also shown to the visiting dignitaries. This was followed by the Bharatiya Janata Party National President informing the visiting Heads of Missions about the party organization, BJP’s ideology and principles, its vision and its electoral struggles and successes. He also answered questions of the Heads of the Missions.

The “Head of Missions” to India were so inquisitive about the BJP that they spent 3 hours in the BJP headquarters while the interactive session went on for over 90 minutes. After the programme the Heads of the Missions also toured the BJP headquarters. During the interaction, several Heads of the Missions appreciated the pro-poor policies and programmes of the Narendra Modi Government and their effective implementation. They also showed keen interest in knowing more and experiencing highly successful programmes and policies of the Narendra Modi Government being implemented at village and grassroots level like the DBT scheme and other pro-poor schemes.

–Today, the BJP is the world’s largest political organization and it gives me great pleasure to welcome the dignitaries to the BJP headquarters.

–From its lowest ebb to great successes the BJP has crossed many milestones. The BJP is celebrating its 42nd Foundation Day but our journey began in 1951 with the formation of the Jana Sangh. Since then the Bharatiya Janata Party has never deviated from its ideology and principles. The party is committed to cultural nationalism, integral humanism and ‘Antyodaya’, based on which the BJP is constructing and developing a ‘New India’. All our programmes and policies are focused in this direction.

–Under the leadership of Hon’ble Prime Minister Shri Narendra Modi, BJP is constantly touching new heights. At the same time, we have set the highest standards of internal democracy in the party. From the booth president to the national president in the party, all are elected through the due election process.

–Under the leadership of the respected Prime Minister Shri Narendra Modi, a big change has come in the lives of the common people of the country in the last almost eight years. Empowerment of the person standing at the last rung of the society is the main objective of Shri Narendra Modi government.

–We work for the all-inclusive welfare of all the people of the country without appeasing anyone. ‘Vasudhaiva Kutumbakam’ is the root of our thought.

–Our government has worked on the principle of “Sabka Saath, Sabka Vikas, Sabka Vishwas and Sabka Prayas” for the welfare of all people irrespective of caste, religion and religion or region. This has also been the policy of BJP.

–BJP stood firm on its ideology on its principles, remained with the people and as a result of this, the party which once had two members of parliament is serving the people today with a majority of more than 300 seats under the leadership of Prime Minister Shri Narendra Modi Ji.

–BJP is the largest party in the world with more than 18 crore members. The number of our MPs has increased to 402 including Lok Sabha and Rajya Sabha. For the first time since 1988, the membership of a party in the Upper House has crossed 100.

–Today, BJP has its own government in 12 states while BJP has coalition governments in 6 other states. Today, BJP has 1379 MLAs and out of about 11 lakh political booths in the country, there are active committees of BJP in about 8.5 lakh booths.

–In the recently concluded five state assembly elections, the BJP returned with an absolute majority in four states of Uttar Pradesh, Uttarakhand, Manipur and Goa. In Uttar Pradesh and Uttarakhand, the BJP has got two-thirds majority for the second time in a row.

–The service and social side of BJP also came to fore in the Corona period. Under the leadership of Hon’ble Prime Minister Shri Narendra Modi, the BJP has brought the mantra of ‘Seva Hi Sangathan’ to the ground.

–During the Ukraine crisis, where the Prime Minister Shri Narendra Modi was engaged in evacuating thousands of Indian students trapped there, thousands of volunteers from the BJP kept in constant contact with the families of the victims.

–Diplomats from countries like Poland, Slovakia and Romania were also present. He thanked all very much for their cooperation for which we were able to get our students out of war-torn Ukraine.