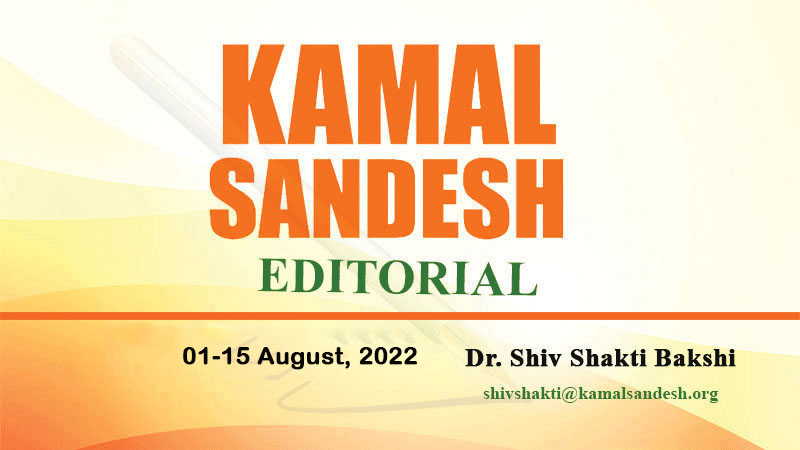 As Smt. Droupadi Murmu took the oath of the office of the President of India, the faith of the nation in the transformative power of democracy was further reinforced. The amazing journey of a woman from a tribal community belonging to one of the remotest parts of the country to the post of President of India is a journey of which every Indian feels proud. It is not only an accomplishment of an individual but an achievement of the nation, its constitution, its faith in democratic polity and its vision of ‘Ek Bharat, Shreshtha Bharat’. It is a momentous event when the last man in a society is further re-assured of the firm commitment of the system to the philosophy of ‘Antyodaya’ and unflinching faith in the mantra of ‘Sabka Saath, Sabka Viaks, Sabka Vishwas, Sabka Prayas’. It has sent a message to even the most remote parts of the country that they are one with India, and it has empowered even the

While India is witnessing transformative change in almost every sector under the visionary leadership of Prime Minister Shri Narendra Modi, every section of society is today feeling empowered and feeling like an equal stakeholder in the onward march of the country

most marginalised sections of society that India also belongs to them. The huge margin of victory of Smt. Droupadi Murmu has once again shown the will of the people to uphold the high ideals and values that inspire the nation in its onward journey towards a ‘New India’. It is a historic occasion, a time to celebrate!
While the nation today celebrates the highest office of the country being adorned by a woman from the tribal community of the country, it is a fact that this journey has taken 75 years, even after independence. It’s a matter of pride that the dream of people from even the most deprived and marginalised sections of society adorning high offices in the country has come true at a time when the nation is celebrating 75 years of independence. In nominating Smt. Droupadi Murmu as the NDA candidate for the post of president, the BJP led NDA has presented to the nation its commitment to all-inclusive politics and faith in the immense possibilities in the power of marginalised, deprived, oppressed, women and youth of the nation. While India is witnessing transformative change in almost every sector under the visionary leadership of Prime Minister Shri Narendra Modi, every section of society is today feeling empowered and feeling like an equal stakeholder in the onward march of the country.

Today, when the nation is celebrating ‘Azadi ka Amrit Mahotsava’, Smt. Droupadi Murmu adorning the highest constitutional office in the country may be seen as an ‘amrit’ which will further invigorate national life with firm faith in its immense possibilities. Smt. Droupadi Murmu represents the struggle of a woman and a person belonging to a tribal community from one of the remotest parts of the country, which is an inspiration for the millions of people who can draw strength from her struggle. She has been serving the poor, deprived, distressed and neglected, while constantly fighting poverty and adversity while holding many responsibilities in public life. The nation will definitely gain from her rich administrative experience, sensitivity, and commitment to people. At the same time, Shri Ram Nath Kovind has completed an illustrious innings as president of India while maintaining the high standards of the highest constitutional office that he held for the last five years. The nation will remain indebted to him for his outstanding services, enriching the office with his immense experience, dignified conduct, and extraordinary statesmanship. While the nation is celebrating its moment of pride as the first tribal woman has taken the oath as president of India, Shri Ram Nath Kovind’s distinguished tenure as president is another reason for national pride.