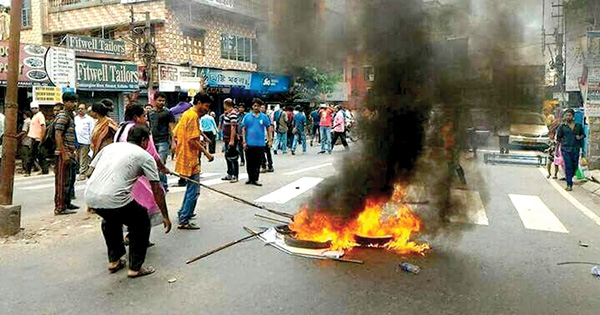 At a time when the Narendra Modi Government is practicing the politics of Development for all and appeasement to none, Mamta Banerjee is on the path to declaring West Bengal an “Islamic State” engineering a Kashmir style Hindu exodus. Since she assumed power Hindus in Bengal are subject to worst form of Jehadi oppression socially, economically and politically. State sponsored systematic targetting of the Hindus in many areas & localities has turned west Bengal into the Hate State of India. Be it the postponment of Durga Visarjan to accomodate Muslims for Muharram or the preference to Nabi-Divas over saraswati Puja in Bengal schools, Mamta Government is fast turning Bengal into an Islamic Theocratic State. The Burdwan Blasts, attacks on Hindus in Dhulagarh, Malda, and more recently in Bashirhat suggest that the West Bengal government is for the Muslims, by the Muslims and of the Muslims. Other social groups must face Kashmir style extinction at the earliest. The Calcutta High Court in June 2016 rejected an allowance announced by West Bengal government for Imams and Muezzins, ruling it to be unconstitutional and against the public interest. The court said the allowance violated Articles 14 and 15/1 of the Constitution, which provide that the state shall not discriminate against any citizen on grounds only of religion, race, caste, sex, place of birth, or any of them.

Mamta’s Pakistan Connections are emerging fast and thick as we dive deeper into her conduct. As per a report in Pakistani daily The Dawn, under a caption “Canvassing in ‘mini-Pakistan’ of Kolkata” (dt 29.04.2016), the Minister for Urban Development and for Municipal Affairs in Mamata Banerjee’s Cabinet Bobby Firhad Hakim addressed Garden Reach as ‘mini-Pakistan’ while taking a Pakistani daily journalist for a stroll. “Please come along and let us take you to mini-Pakistan in Kolkata,” The Dawn reporter Maleeha Hamid Siddiqui quoted him as saying. The Dawn reporter further wrote, “Seeing me loitering around with my notebook in hand, the men in the neighbourhood want to know what TV channel I work for. When I tell them I am from Pakistan, they break into broad smiles and tell me of their relatives who live back home.” Hakim is believed as very close to WB CM Mamata Banerjee and an Islamic face to control the Muslim vote bank politics exercised by Trinamool Congress Party through rampant appeasement and allowing Muslim hooliganism in the state.

A day after more than 200 Sri Ram Shobajayatra (Lord Ram rallies) backed by the Sangh parivar – where participants of all ages brandishing traditional weapons as mentioned in the scriptures like swords, daggers, spears, maces, bows and arrows – were held in Kolkata and across Bengal, the chief minister alleged that those who had conducted them had violated Bengal’s culture, Hindu tradition and law and order as well. A few hours later, West Midnapore police started a case under the Arms Act, 1959, against BJP legislator and State President, Dilip Ghosh, who was seen with a sword in Kharagpur town on Ram Navami Day (5th April, 2017). But there is a different yardstick for Muslims. They can organize their religious programmes and functions without any permission, but Hindus have to go High Court time and again to obtain such permission after restrictions put by Mamata’s police. Muslims can carry swords and other weapons in Muharram procession without any restrictions, but Ram Navami organizers have to face police case. Muslim Imams and Muazzins are treated as Didi’s own brothers and allowed Imam and Muazzin allowances, but Hindu priests must be treated as enemies, not even as step brothers and they are to be threatened to face bad consequences if they claim so. The discrimination to Hindus in Bengal is limitless.
When the Bengal Govt is promoting Quran and Urdu based Madrasa education in the state, the same Govt is trying to stop schools run by Hindu bodies connected with RSS. The Bengal government recently put on notice 125 schools run by nationalist trusts. These organisations have a network of over 350 schools in Bengal, with a strength of over 60,000 students. Interestingly, this year the state of WB has announced a huge Rs 2815 Cr for Minority Affairs and Madrasa Education which is larger than total budget of Irrigation and Waterways (Rs. 2410 Cr), Large Industries-Textile (Rs.2154) and Backward Class & Tribal Welfare (Rs. 2775 Cr).

Bengal has always witnessed a coalition of sorts when it comes to anti-Hindu policies because it suits most political parties due to their ideological biases against the Hindus. For instance the Communists and congress have been harnessing the Hindu-Hate constituency among the non-Hindu communities for a long time there. After partition, the Hindus from East Pakistan were forced to seek refuge in West Bengal. It was not surprising that due to such large influx, the Hindu population in the state, which constituted 78.45 per cent in 1951 had declined to 70.54 per cent as per the 2011 census.

It is therefore important to understand that BJP’s secular stand make these forces uncomfortable. BJP’s rise is therefore Mamta’s biggest challenge in her pursuit of communal politics. She is so much terrified that recently senior BJP leaders (Roopa Ganguly, Kailash Vijayvargiya) were intimidated by the Police in fake cases manufactured just to suppress BJP’s rise in Bengal.
At the heart of the issue is the over 30% muslim vote bank mostly harnessed through legitimising the Illegal Bangladeshi immigrants by the Communists and now by Mamta Banerjee. Out of the 2 crores she has helped 1.5 Crore illegal Bangladeshi Muslim immigrants get citizenship and voting rights. She knows it very well that her paid cadre alongwith the 30% muslim vote is good enough to capture power in West Bengal. In fact a demographic tilt in favour of Muslims will always result in Mamta safely winning elections. A large section of Imams, Mullahs and fundamentalists control the Islamic vote Bank in West Bengal govern the state through proxies.

West Bengal shares 2200 km of India’s Bangladesh border which has turned out to be one of the most suitable route for terror operatives from Harkat-ul-Jihadi al-Islami (HuJI) and Jamaat-ul-Mujahideen Bangladesh (JMB) to sneak through. A recent report suggest that nearly 2,010 HuJI and JMB operatives entered through the three states, approximately 720 entered through Bengal border alone. The Bengal government officials are “skeptical” about the report, “but even if just a close estimate, the number is disturbing as intelligence reports pegged the number of infiltrators in 2014 and 2015 at 800 and 659, respectively.” The terror masterminds of the infamous Dhaka Gulshan Café blast stayed in a hotel in Bengal. Though Mamta Banerjee cries foul that the Border is controlled by the centre, the fact remains that to patrol the sensitive areas, the West Bengal has to allocate sufficient resources which it is not doing presently in order to facilitate safe heaven for the terrorists and smugglers.

There are serious issues of corruption in the Mamta government regime. The collapse of the under-construction Vivekananda Road flyover in north Kolkata killed 27 people on March 31, 2016. It was alleged that Trinamool leaders of the area supplied substandard building materials that were used in the construction. The Sharada and Rose Valley Scams and the Narada Sting, provide sufficient evidence of high level corruption by the TMC under Mamta’s Leadership.

As we mark the 126th Birth Aniversary of the creator of Bengal on July 6th, the state is witness to what Shyama Prasad Mukherjee feared during the “Bengali Hindu Homeland Movement” in late 1946. On the Direct Action Day (Great Calcutta Killings) and the Noakhali riots collectively more than 9000 Hindus were massacared by the Muslim League (Jinnah) under state sponsorship of the British. As though History repeats itself, Mamta Banerjee very much alike the Jinnah’s Muslim League has set the stage for a oppressed West Bengal where it will be a crime to remain Hindu in Bengal.

(The writer is Member of Parliament &
National Spokesperson of BJP)