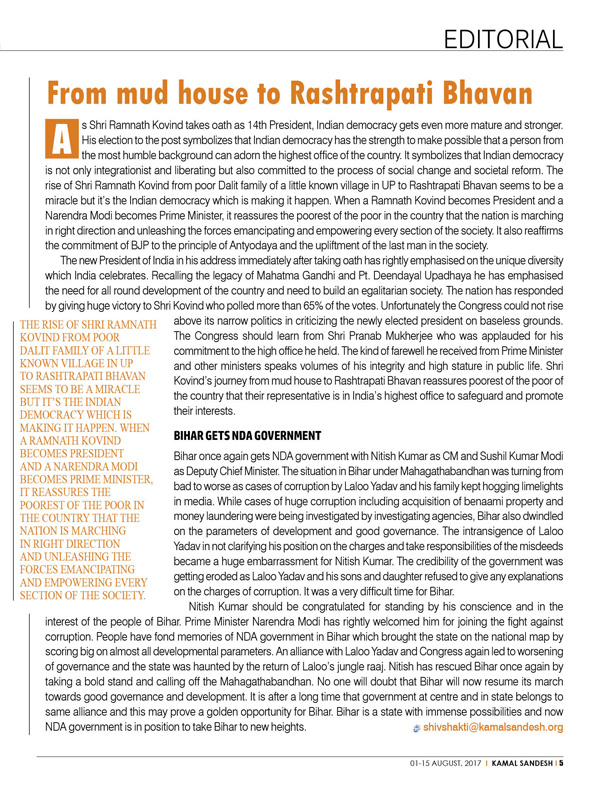 As Shri Ramnath Kovind takes oath as 14th President, Indian democracy gets even more mature and stronger. His election to the post symbolizes that Indian democracy has the strength to make possible that a person from the most humble background can adorn the highest office of the country. It symbolizes that Indian democracy is not only integrationist and liberating but also committed to the process of social change and societal reform. The rise of Shri Ramnath Kovind from poor Dalit family of a little known village in UP to Rashtrapati Bhavan seems to be a miracle but it’s the Indian democracy which is making it happen. When a Ramnath Kovind becomes President and a Narendra Modi becomes Prime Minister, it reassures the poorest of the poor in the country that the nation is marching in right direction and unleashing the forces emancipating and empowering every section of the society. It also reaffirms the commitment of BJP to the principle of Antyodaya and the upliftment of the last man in the society.

The new President of India in his address immediately after taking oath has rightly emphasised on the unique diversity which India celebrates. Recalling the legacy of Mahatma Gandhi and Pt. Deendayal Upadhaya he has emphasised the need for all round development of the country and need to build an egalitarian society. The nation has responded by giving huge victory to Shri Kovind who polled more than 65% of the votes. Unfortunately the Congress could not rise above its narrow politics in criticizing the newly elected president on baseless grounds. The Congress should learn from Shri Pranab Mukherjee who was applauded for his commitment to the high office he held. The kind of farewell he received from Prime Minister and other ministers speaks volumes of his integrity and high stature in public life. Shri Kovind’s journey from mud house to Rashtrapati Bhavan reassures poorest of the poor of the country that their representative is in India’s highest office to safeguard and promote their interests.

Bihar once again gets NDA government with Nitish Kumar as CM and Sushil Kumar Modi as Deputy Chief Minister. The situation in Bihar under Mahagathabandhan was turning from bad to worse as cases of corruption by Laloo Yadav and his family kept hogging limelights in media. While cases of huge corruption including acquisition of benaami property and money laundering were being investigated by investigating agencies, Bihar also dwindled on the parameters of development and good governance. The intransigence of Laloo Yadav in not clarifying his position on the charges and take responsibilities of the misdeeds became a huge embarrassment for Nitish Kumar. The credibility of the government was getting eroded as Laloo Yadav and his sons and daughter refused to give any explanations on the charges of corruption. It was a very difficult time for Bihar.

Nitish Kumar should be congratulated for standing by his conscience and in the interest of the people of Bihar. Prime Minister Narendra Modi has rightly welcomed him for joining the fight against corruption. People have fond memories of NDA government in Bihar which brought the state on the national map by scoring big on almost all developmental parameters. An alliance with Laloo Yadav and Congress again led to worsening of governance and the state was haunted by the return of Laloo’s jungle raaj. Nitish has rescued Bihar once again by taking a bold stand and calling off the Mahagathabandhan. No one will doubt that Bihar will now resume its march towards good governance and development. It is after a long time that government at centre and in state belongs to same alliance and this may prove a golden opportunity for Bihar. Bihar is a state with immense possibilities and now NDA government is in position to take Bihar to new heights.