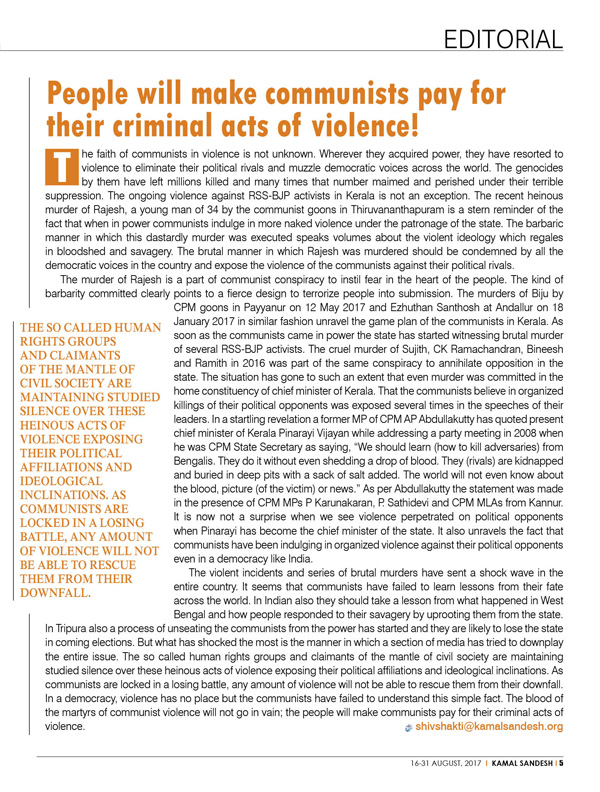 The faith of communists in violence is not unknown. Wherever they acquired power, they have resorted to violence to eliminate their political rivals and muzzle democratic voices across the world. The genocides by them have left millions killed and many times that number maimed and perished under their terrible suppression. The ongoing violence against RSS-BJP activists in Kerala is not an exception. The recent heinous murder of Rajesh, a young man of 34 by the communist goons in Thiruvananthapuram is a stern reminder of the fact that when in power communists indulge in more naked violence under the patronage of the state. The barbaric manner in which this dastardly murder was executed speaks volumes about the violent ideology which regales in bloodshed and savagery. The brutal manner in which Rajesh was murdered should be condemned by all the democratic voices in the country and expose the violence of the communists against their political rivals.

The murder of Rajesh is a part of communist conspiracy to instil fear in the heart of the people. The kind of barbarity committed clearly points to a fierce design to terrorize people into submission. The murders of Biju by CPM goons in Payyanur on 12 May 2017 and Ezhuthan Santhosh at Andallur on 18 January 2017 in similar fashion unravel the game plan of the communists in Kerala. As soon as the communists came in power the state has started witnessing brutal murder of several RSS-BJP activists. The cruel murder of Sujith, CK Ramachandran, Bineesh and Ramith in 2016 was part of the same conspiracy to annihilate opposition in the state. The situation has gone to such an extent that even murder was committed in the home constituency of chief minister of Kerala. That the communists believe in organized killings of their political opponents was exposed several times in the speeches of their leaders. In a startling revelation a former MP of CPM AP Abdullakutty has quoted present chief minister of Kerala Pinarayi Vijayan while addressing a party meeting in 2008 when he was CPM State Secretary as saying, “We should learn (how to kill adversaries) from Bengalis. They do it without even shedding a drop of blood. They (rivals) are kidnapped and buried in deep pits with a sack of salt added. The world will not even know about the blood, picture (of the victim) or news.” As per Abdullakutty the statement was made in the presence of CPM MPs P Karunakaran, P. Sathidevi and CPM MLAs from Kannur. It is now not a surprise when we see violence perpetrated on political opponents when Pinarayi has become the chief minister of the state. It also unravels the fact that communists have been indulging in organized violence against their political opponents even in a democracy like India.

The violent incidents and series of brutal murders have sent a shock wave in the entire country. It seems that communists have failed to learn lessons from their fate across the world. In Indian also they should take a lesson from what happened in West Bengal and how people responded to their savagery by uprooting them from the state. In Tripura also a process of unseating the communists from the power has started and they are likely to lose the state in coming elections. But what has shocked the most is the manner in which a section of media has tried to downplay the entire issue. The so called human rights groups and claimants of the mantle of civil society are maintaining studied silence over these heinous acts of violence exposing their political affiliations and ideological inclinations. As communists are locked in a losing battle, any amount of violence will not be able to rescue them from their downfall. In a democracy, violence has no place but the communists have failed to understand this simple fact. The blood of the martyrs of communist violence will not go in vain; the people will make communists pay for their criminal acts of violence.