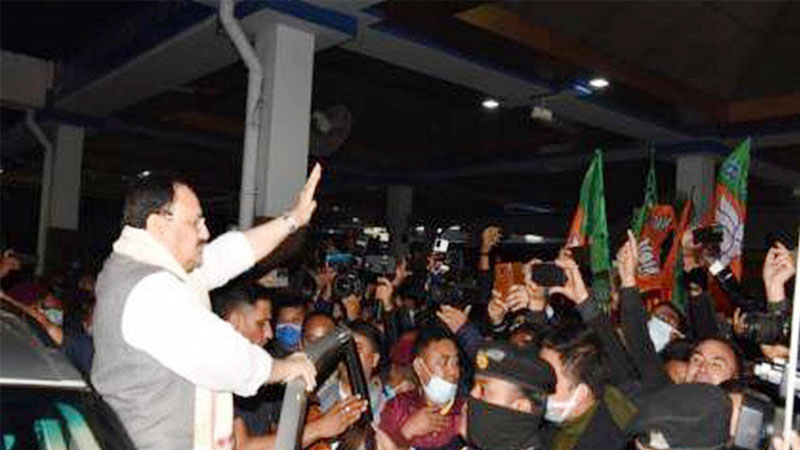 BJP National President Shri JP Nadda on 26 November, 2021 said that Prime Minister Shri Narendra Modi has given ‘Mazboot Sarkar’ while there was ‘Majboor Sarkaar’ during the Congress led UPA regime.

While interacting with Ex-Servicemen in Imphal, Manipur, Shri Nadda slammed the UPA government for its inaction during the 2008 terror attacks in Mumbai that claimed the lives of more than 100 civilians and other security personnel. Referring to Congress leader Manish Tewari’s new book, he said, “The Congress leader in his book has said that not responding to the terror attacks was the ‘insensitiveness of the UPA government’. The Indian Army was ready but the government did not take a stand. This is living proof of ‘Majboor Sarkaar’. We must understand where the strong leadership of PM Shri Modi has led us today and where UPA leadership had taken us. PM Shri Modi has given ‘Mazboot Sarkar’ while there was ‘Majboor Sarkaar’ during the UPA regime,” said Shri Nadda.

“On one hand, PM Shri Modi reacts with surgical strikes and airstrikes, showing India’s strength. One the other, there was no reaction after 26/11 under a weak UPA government,” he added.

The BJP President further said that the Prime Minister has given the message that the country is safe only because of the soldiers who are standing on its borders. “32 new border roads, 683 km long, are being built on Indo-China borders. 44 strategic bridges in sensitive areas are being developed. Daulet Beg Oldi road has been completed in 2019. It took 19 years, but work was done at full pace under PM Shri Modi,” he said.

Further hitting out at the UPA government, Shri Nadda said that Rs. 42,000 crore was allotted for One Rank, One Pension (OROP). “The demand for OROP was started in 1972 by the Army personnel. The outgoing UPA government showed you a 500 token amount – a distasteful joke. After PM Shri Modi came, Rs 42,000 crore was allotted for OROP and all arrears were also cleared,” he added.

Shri JP Nadda said Manipur has witnessed holistic development for the first time under the BJP-led government headed by Shri N Biren Singh. He said the NDA government is ensuring the last-mile delivery of various government schemes in Manipur while the previous ones believed in blockades.

In the last five years, criminalization of politics has been stopped by the government. “Roads that used to see the flow of blood have been transformed into double-lane roads. Broken bridges have been replaced by all-weather bridges. Rail lines are being laid to connect the hills with the valley,” the BJP President said.

He expressed hope that the people of Manipur will once again place their trust in the inclusive administration of the NDA in the state assembly election due next year.

HIGHLIGHTS OF THE SPEECH


Defence corridors are coming up in Tamil Nadu and Uttar Pradesh and the government is focusing on indigenous production in defence to further strengthen our forces.

There were no defence deals without commission during the previous governments. Our defence forces had to suffer a lot due to this.

He further said that civilian casualties in the last six years have decreased by 79 per cent and casualties of the armed forces have gone down by 23 per cent.

Under the PM Krishi Sinchayee Yojana in Manipur, 11,110 pump sets have been installed, about 100 water harvesting ponds have been created.

Under the Stand-Up India scheme, 5,477 entrepreneurs have been sanctioned Rs 114 crore and 60,000 people are being employed in Manipur.