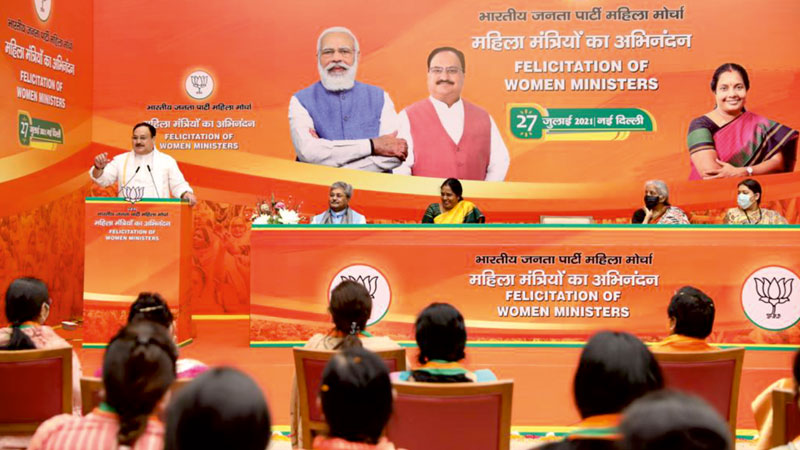 Bharatiya Janata Party National President Shri Jagat Prakash Nadda addressed the felicitation program of ‘Matri Shakti’ included in the Union Council of Ministers on 27 July, 2021 and paid his gratitude to ‘Matri Shakti’ for building family, society and the country and appreciated their role in Navnirman.

She thanked Prime Minister Shri Narendra Modi for giving proper representation to women and giving them an important place in the union cabinet and appreciated the support of BJP National President Shri Jagat Prakash Nadda in taking forward the women power in BJP. Along with the National In-charge of Mahila Morcha and National General Secretary of the party, Shri Dushyant Gautam, all the party bearers of the Mahila Morcha, women MPs and senior karyakartas were present.

While addressing the felicitation progamme, National President Shri Jagat Prakash Nadda said that in our culture, the respect of ‘Matri Shakti’ has been there for centuries. The whole world should learn from our culture. Whenever there is a discussion, we do not say ‘Devta and Devi’, but we say ‘Devi-Devta’ and similarly Lakshmi-Narayan, Gauri-Shankar and Sita-Ram. In our culture, the place of women always comes first. It is believed that in a house where there is no respect for the guru, mother and woman, there can never be a growth. Where women are respected, that family always progresses, no one can stop them from moving forward. I also congratulate the National President of BJP Mahila Morcha Smt. Vanithi Srinivasan for organizing an excellent program of felicitation of women ministers.