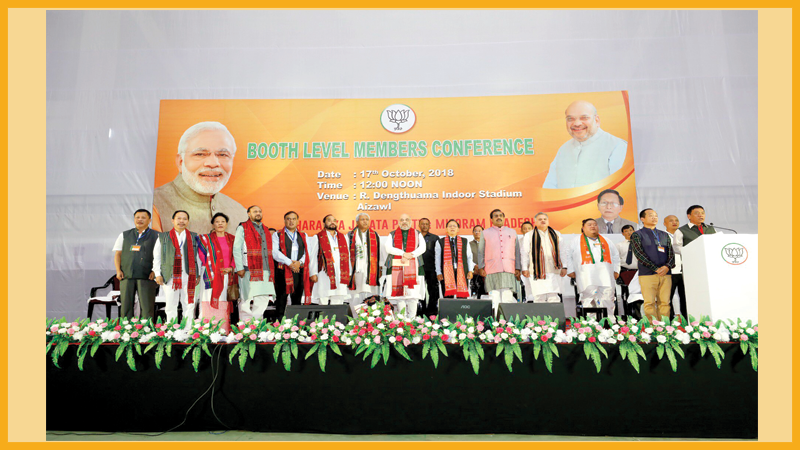 Bharatiya Janata Party National President Shri Amit Shah, who has kick-started campaigning in poll-bound Mizoram, said that the state will soon witness a corruption free and a pro-development government in the state.

Addressing a statewide booth level workers meeting at Dengthuama Indoor Stadium in Aizwal (Mizoram) on 17 October, 2018 the BJP National President said, “In Nagaland or Meghalaya, wherever BJP contested, it won. I am quite confident that the BJP will win the forthcoming state election and Mizoram will soon see a corruption free, the pro-development government in the state.”

Shri Shah, who also inaugurated the Mizoram BJP headquarters, announced that the party will contest all the 40 seats on its own. “We will not go with the Congress or the Mizo National Front (MNF). We will fight all seats on the basis of the strength of our workers,” he said. Shri Shah also inducted senior Congress leader BD Chakma into the party.

Hitting out at the Congress, the BJP President said that poll-bound Mizoram has lots of possibilities in hydro-power and tourism but the Congress government failed on all fronts.

“Mizoram has lots of possibilities in hydro-power and tourism but Congress government failed on all fronts. The inefficiency of state government can be seen in the fact that let alone promoting new businesses, their corruption led to the closure of three existing PSUs,” he said.

The BJP President further said that the next Christmas in Mizoram will be celebrated under the BJP’s rule.

“After seeing so many of you here, I am reassured that the next Christmas Mizoram celebrates will be a Christmas under the BJP government,” he said.

Mizoram is the only state in the entire North-East where the Congress is in power presently. The BJP has been reiterating that it would make all efforts to remove the corrupt Congress from power. Single-phase Assembly polls in Mizoram will be held on November 28. Counting of votes will be done on December 11.