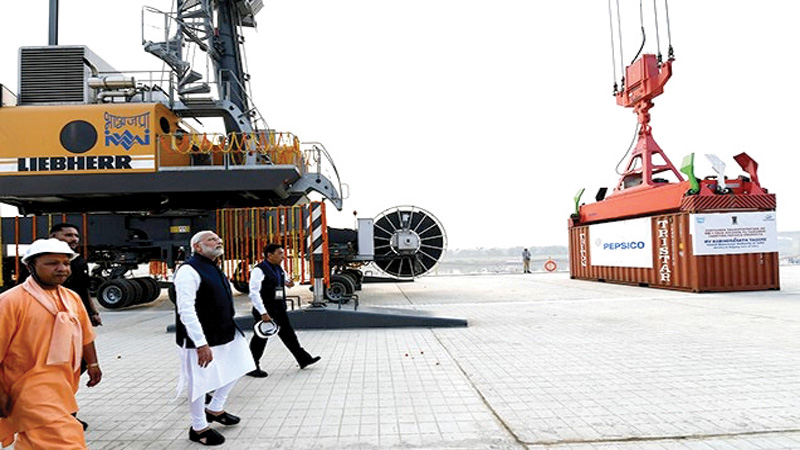 In the past five years, the delivery of infrastructure projects has been expeditious and highly efficient. Several projects have been inaugurated, some which have not only been conceptualized but also completed by the government under the leadership of the Prime Minister. In other cases, under PM Modi due attention has been paid to complete and speed up progress on projects which were incomplete or neglected. Some of the major infrastructure projects that were completed and some of them waiting completion are as follows:

The Bogibeel Bridge, India’s longest railroad bridge with a serviceable period of around 120 years was completed in the year 2018. This bridge was sanctioned in 1997 and completed after a delay of over 21 years. This bridge is in line with PM Modi’s vision that Northeast will be the gateway to New India.

The 9.2 kilometer long Chenani Nashri Tunnel is the longest road tunnel in South Asia. It was inaugurated in 2017. This twin-tube tunnel reduces the distance between Jammu and Srinagar by approximately 30 kilometers. It boasts of features such as smoke and heat dampeners in case of a fire, air quality monitors and an integrated tunnel control system to name a few, proving to be a great advantage for our armed forces during times of crisis.

Prime Minister Modi inaugurated the first phase of the Gogha Dahej Ro Ro Ferry in Gujarat in October 2017. Prior to the inauguration of the ferry, transportation between Gogha-Dahej took approximately 8 hours by road however with the ferry the distance is now covered within one hour. 12,000 passengers and 5,000 vehicles are daily beneficiaries.

Prior to May 2018, Arunachal Pradesh was not on the commercial aviation map of the country. However, on the 21st of May, Chief Minister Pema Khandu flagged off the first commercial flight in Arunachal Pradesh part of the Regional Connectivity Scheme of the Modi government. This will not only improve economic development but also provide a boost to tourism in the region.

Under the UDAN scheme, PM Modi inaugurated Sikkim’s first airport in September 2018. The airport was inaugurated almost 9 years after its foundation stone was laid. Prior to this airport’s launch the nearest airport from Sikkim was 124 kilometers away in Bagdogra in West Bengal. Sikkim’s airport will not only boost tourism and the economy in the region but is of significant strategic importance due to it being only 60 kilometers from the Indo-China border.

The 13-km long, 2 lane Kollam bypass on National Highway-66 (NH 66) was long awaited. The Modi government delivered the project at a cost of Rs 352 crore, thus reducing the travel time between Alappuzha and Thiruvananthapuram in Kerala as well easing traffic congestion.

The 110 kilometer long Bidar Kalaburagi Railway Line was inaugurated by PM Modi in October 2017. The foundation stone for this project was laid in the year 2000 and it was completed after a delay of almost 17 years. With the inauguration of this railway line, the travel time between Bengaluru and New Delhi has reduced by 380 kilometers and 6-8 hours approximately.

The first monorail of the country has come up in the Mumbai city, ensuring a hassle-free commute for the people of the maximum city. The project is a step ahead towards achieving the vision of sustainable transport system for sustainable cities.

Diversion of Discharge to the River Ganga

For decades on end, metric tonnes of sewage would be drained into the river Ganga, impacting the holy water’s life force. In order to revive River Ganga, the government has been successful in diverting the sewage being discharged to the river from Sisamau drain, that is also Asia’s oldest drain, to sewage treatment plants in Kanpur.

Even after 70 years since independence, states of Meghalaya, Tripura and Mizoram remained devoid of railway connectivity. This further deepened the isolation of the region. Identifying the immediate need to correct the historical wrong, the Modi government took integration of Northeast India with a rest of the nation on a mission mode, with the entire network converted to broad gauge. It brought Meghalaya, Tripura and Mizoram on the rail map of India after 70 years of independence!

India’s rivers provide a huge potential for developing a cost-effective and sustainable mode of transport. However, their potential had not been utilized since independence. In that sense, a beginning has been made in developing inland waterways with PM Modi inaugurating India’s first multi-modal terminal on the Ganga river and receiving the first container vessel from Haldia to Varanasi.