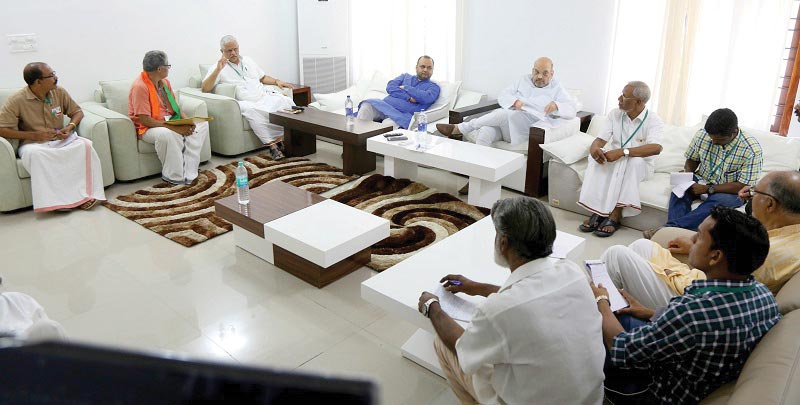 According to folklore the original name of Lakshadweep is Lakshyadweep. But the fact is that in the past only Sailors, Fishermen and tourists had aspired to reach these groups of Islands. However, these islands and its natives were never ever been an aspiration for rulers, politicians. But On May 16th , 2017 a new history has been created in Lakshadeep. When Prime Minister Narendra Modi and BJP National President Amit Shah are working in tandem and with enthusiasm towards a corruption free India and a Congress Mukt Bharat respectively, not a single corner in this country is evading their attention. For politicians from other political outfits, Lakshadeep with a single parliament seat was not an attraction at all. However BJP’s objective is to impart development even to the last person standing in the last line. This was the ideology coined by Pandit Deen Dayal Upadhayaya in “Ekatma Manav Darshan”. By spreading this message to the nooks and corners of this country, is no doubt, would be an appropriate shraddanjali for the great philosopher on his birth Centenary. This thought has motivated National President Amit Shah to reach to the people of this scattered Island cut off from the mainstream of this country.

Amit Shah’s tour program to the island, in all aspects, was a special and significant one. The event became a huge success . Amit Shah’s visit stood out from the leaders of other political parties who kept a calculated distance from the ordinary people staying back in the comfort zone of his security personnel. Amit Shah stole heart of the people of the island the moment he landed in Agathy. There was not a single interlude or repose from the time he landed in the island from the time he left the place at 3.30 pm on 18th May. The national president took part in various committee meetings, state committee meeting, booth committee meetings, public meetings, house visits, meeting with eminent personalities of the island, having food from karyakartas house, the commencement of Deendayal birth centenary celebrations in the island, state –district office bearers meeting, office visit etc.

The first official program was the state core committee meeting held after lunch. Amit Shah assessed the organizational strength of the 10 districts and gave directions how to strengthen the organization further. The meeting also decided to build offices in places where there are no office buildings and to begin the membership campaign robustly. The meeting laid out plans to garner 5000 party members before November 2017. The president assured that BJP will not repeat the mistakes of former regimes that ignored and sidelined Lakshadeep. He assured that the aspirations of the people of Lakshadeep namely, drinking water, more Cargo-Passenger Ships, latest telecommunication infrastructure, fish storage facilities, etc would be made possible in a ware fare basis. Apart from the national president, National Joint Gen. Secretary (org) B.L.Santhosh, Prabhari Mahesh Giri MP, Arvind Menon participated in the core committee meeting.

In the state committee meeting that was held in the state committee office, national president enquired about the various issues pertaining to the island and assured that all the points discussed will be conveyed to the Prime Minister. When state committee meeting concluded it was about time for the public meeting in the Panchayat Stadium. The stadium was jampacked as people flowed in copiously to have a glimpse of the leader. This was a new experience for the island. The islanders who never had the habit of attending a public program with family broke the stint and flowed into the venue in hordes. The people congregated in the stadium received each and every word by applauding.

He spoke like a local touching upon the most local issues . By 2019, he assured that, 75% of the island’s issues will be solved and out of the 120 schemes announced by the Central Government 80 of those will be implemented in the island very soon. He ended his speech by reassuring to implement projects in connection with infrastructure development, start-ups in marine products field, employment for youth, state of the art healthcare facilities, educational facilities etc. He also promised that the Prime Minister will visit Lakshadeep next year. The presence of the NCP MP from the island Muhammed Fazil and his party members in the meeting was significant. This particular event underlined the fact that development process can only happen through BJP.

Last phase of the National President’s tour program began with a visit to the house of Piriyathimadu Abdul Khader. It was dream like situation for Khader. Shri Amit Shah spent time in Khader’s house with him and his family, having food and taking snaps with everyone. Later he took part in a booth committee meeting in booth number 39 and 40. He made few more house visits. First was to the fisherman Abdu Rehaman and then to the local singer Kadapurathu Poovu. Decades ago Poovu had rendered her singing abilities in front of former PM Indira Gandhi is now nearing 80 and is laid up due to health issues. Amit Shah directed the Administrator of the Island Farooq Khan to take care of her treatment requirements. While he departed for Anthroth Island the people in Kavarathy congregated to see him off.

The next program was in Androth from where many leaders have in the past represented Lakshadeep in parliament. In Androth too the National President was received with zeal and enthusiasm. The people who have realized that BJP is the only solution for the development of the Island came in hordes, keeping apart their political affinities, to receive the people’s leader. This kind of a reception to a BJP leader from an island which is of 100% Muslim population has perplexed many political observers and opponents. The public meeting was organised in the Jubilee hall in Androth Island. When the hall filled up, the crowd pouring in was managed by putting up a screen for people to view.

National President bid adieu to the Island only after promising that within 2 years every Island inhabited with people will be provided with drinking water, more cargo-passenger ships, latest telecommunication technology, infrastructure development, cold storage to preserve marine products, tourism project connecting 10 islands, modern treatment facilities and doctor’s availability including Cardiology centres, training centres that will impart the skill of making ships and sailing of the people of Minicoy, Smart City project, all before 2019.

Amit Shah reached to the people with a clear cut planning and related projects to implement it. He was able to convince the people that his words weren’t make believe like politicians from other political outfits. He could easily experience that the people of the Island trusted Narendra Modi government and BJP, the driving force. Lakshadeep gives out an image of an annihilated Congress, a tiring NCP and a strengthened BJP. The National President bid adieu to the island by ensuring that a BJP MP from Lakshadeep in 2019 isn’t a distant dream. And the people of the Island have began to say that this isn’t a baloney… this time something is going to happen.