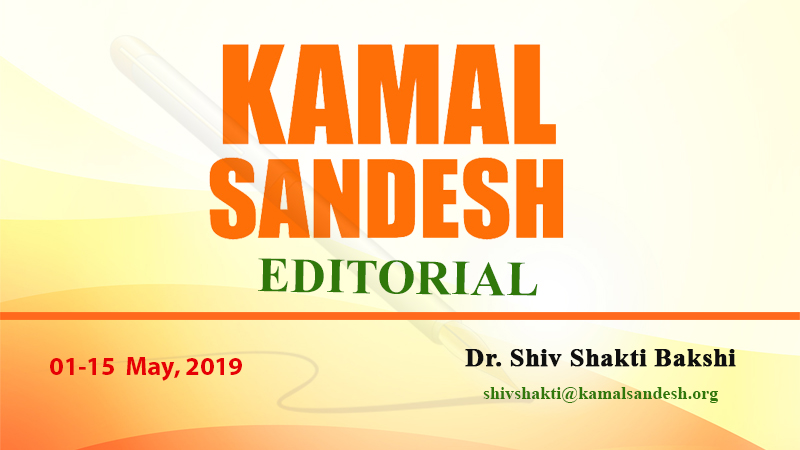 On the completion of two phases of voting, it appears re-assuring to everyone that democracy is thriving in our country as people continue to vote in large numbers. The huge percentage of polling also indicates the fact that India has not only matured as a democracy but it represents an aspirational nation seeking to make its way forward in the comity of the nations. The aspirations of the youth, women, poor, farmers, workers, SCs, STs, OBCs and poor among the general classes are represented in the visionary leadership of Prime Minister Shri Narendra Modi. Shri Narendra Modi today symbolizes the aspirations and hope of the millions of people. The people now believe that they have a leader who can fulfil their dreams and take the country to new heights. The high percentage of voting is an indication that people are now coming forward to realize their aspirations under the decisive leadership of Prime Minister Shri Narendra Modi.

The Lok Sabha elections 2019 is proving to be a one-sided election with opposition failing to pose any credible challenge. While Prime Minister Shri Narendra Modi has emerged as a towering figure, there is no consensual candidate in the ranks of opposition who can be presented as an alternative to him. Although few parties in the opposition have formed alliances, they are not in a position to give a tough fight as their alliance is either ridden by their internal contradictions or they have failed to accommodate various other opposition parties within the declared alliance. As a result there is neither broader alliance on the ground nor any agenda for the nation – they appear to be the coming together of various caste groups fighting for their survival. In fact these are most opportunistic alliances already rejected by the people in earlier elections. These kinds of power hungry, family centric caste groups cannot offer an alternative to BJP which is committed to serve the people by creating ‘Ek Bharat, Shreshtha Bharat’with the vision of ‘Sabka Sath, Sabka Vikas’.

In the last five years, the nation has not only witnessed transformative changes in governance, economy and development but also in politics and the manner in which people have chosen to exercise their voting rights. The BJP has scored victory after victory in many states and entered new areas as a political force to reckon with. This phenomenon has been unleashed mainly by the young voters who have chosen to vote above caste and regional lines and voted for development and good governance. It may be mindboggling for the political pundits who calculate on the basis of caste equations but the new politics has come to stay and that is the politics of development. It is a transformation that is now making India score big in almost every sector of development and helping in getting global recognitions. India is ready for a huge leap in the days to come.

As the new politics is taking shape in the country, family-centric dynastic politics, caste and regional equations are on their last leg. The people of India have shown their determination to rise above these divisive and undemocratic politics and pave path for nation-centric politics of development and good governance. It is a politics which is democratic and in the interest of every individual and in the interest of the entire nation. The Prime Minister Shri Narendra Modi represents that phenomenon which meets the aspirations of a New India. It is one of the biggest achievements of the Modi government that the opposition is left with no issue and finding it difficult to even criticise the government. As people vote for a New India, it is time to fulfil the aspirations and dream of the people in the coming five years. There is no doubt in the minds of the people that under the charismatic and dynamic leadership of Prime Minister Shri Narendra Modi India will achieve new heights and embrace a strong, prosperous and glorious future.
shivshakti@kamalsandesh.org