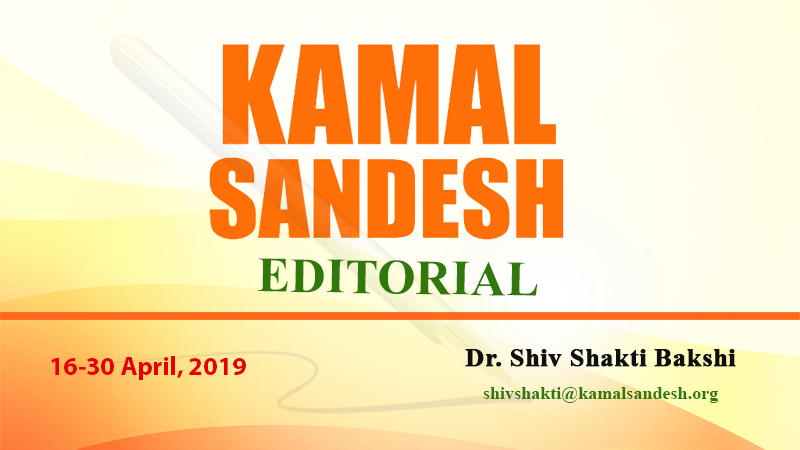 BJP Sankalp Patra for general elections 2019 charts a futuristic roadmap for the nation addressing immediate concerns as well as laying foundation for a New India. The Sankalp Patra which is the outcome of the programme ‘Bharat ke Mann ki Baat’ saw massive participation of people from every walk of life providing crucial inputs and insights for national growth and development. It was a multilayered and multidimensional approach in drafting the Sankalp Patra that resulted in a comprehensive document paving the path for a ‘Sankalpit and Sashakta Bharat’. It has included the welfare of every section of the society, addressing the concerns of every sector and resolving to meet the challenges with confidence and firmness. In fact it represents the aspirations of a confident India which is ready to embrace a glorious future.

As BJP seeks another term in government, the Sankalp Patra emphasises the priorities of a continuing government which has achieved remarkable successes on almost every front in the last five years and is set to take the achievements forward in the coming five years. As India is today the fastest growing major economy in the world with controlled inflation and budget deficit under acceptable brackets, India needs to build on these hard earned gains in the coming five years. The ongoing progress in institutional reforms, innovative ideas and use of technology in governance have given the much required macroeconomic stability paving the way for giant leap for the economy. Along with these the efforts to uplift the poorest of the poor, farmers, labourers, SCs, STs, OBCs and poor among the other classes, women, youth and small entrepreneurs yield results in a big way for the entire society. The regime of stable prices, reduction in interest on loans, corruption free government, transparency and participatory governance has empowered every single individual making him a contributor in the economy. In fact the five years of extremely hard work has brought the nation to the threshold of a huge leap in the days to come.

The Sankalp Patra resolves to build on the gains accrued in the last five years. The 75 milestones to be achieved when India celebrates its 75th anniversary of independence in 2022 further reflect the commitment of the party in building a strong and prosperous India. Moreover, the pledge to lay foundation stone for the India celebrating 100th anniversary of its independence in 2047 shows the wide canvas of leadership vision and foresight. Dreaming about a India having pucca home for everyone, 100% household electrification, piped potable water to every home, gas cylinder in every kitchen, toilets for every home, quality health care for every family and much more makes a vision of universal well being with the mantra of ‘Sabka Sath, Sabka Vikas’. The Sankalp Patra has a transformative agenda for the nation in almost every aspect.

While BJP Sankalp Patra is based on ‘Nation First’ approach, the Congress released its manifesto wtih ‘Vote Bank First’ approach. The BJP has committed itself again on the issue of Common Civil Code, Ram Mandir, Article 370, and other issues of importance related to national security and self respect, Congress talks about weakening the national fabric of India by encouraging separatist and distruptive elements in the country. While BJP talks about zero tolerance towards terrorism, Congress speaks about reviewing AFPSA and sedition law. Congress today stands exposed when it talks about removing poverty. Congress with credibility in negative cannot win votes by making false promises, in place of engaging in such hollow exercise it should engage itself in sincere introspection. As India marches ahead under the dynamic and charismatic leadership of Prime Minister Shri Narendra Modi, the BJP Sankalp Patra unfolds the course the nation will take in the days to come. It will ensure continuity, security, confidence, prosperity and progress.