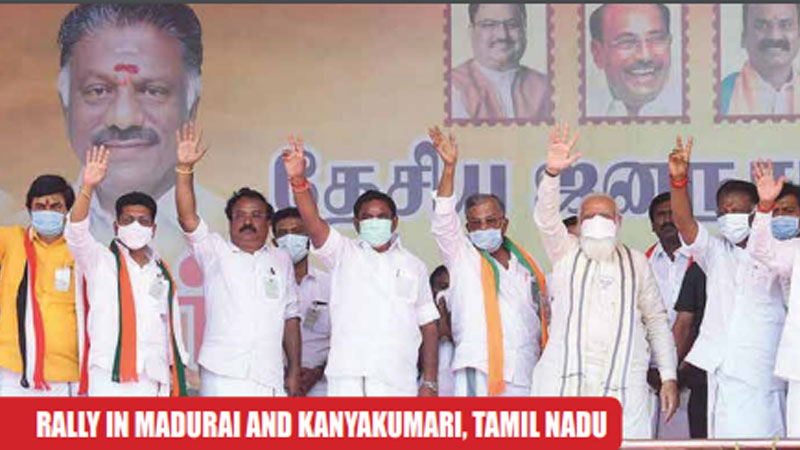 PM Shri Narendra Modi on April 02, 2021 addressed massive public meetings at Madurai and Kanyakumari in Tamil Nadu. Talking about his visit to the famous Meenakshi Temple, Shri Modi said, “I had the blessed opportunity to pray at the Sri Meenakshi Temple. I will cherish those divine moments for the rest of my life.”
Lauding Madurai’s association with Tamil culture, the PM asserted, “Madurai is closely associated with the world’s oldest language, Tamil. Here, one thinks about the Tamil Sangams. I want to appreciate all those working to make Tamil culture and literature more popular. This land had a great influence on Mahatma Gandhi.”

Invoking MGR’s contributions, the Prime Minister stated, “South Tamil Nadu and specially Madurai has a special association with MGR. Madurai Veeran… who can forget this film. We all know who was among those who lent his voice to MGR- it was T.M. Soundararajan. In 1980 Congress dismissed MGR’s democratically elected Government. Elections were called and MGR won from the Madurai West seat. The people of Madurai stood behind him like a rock. In 1977, 1980 and 1984, MGR won from Southern Tamil Nadu.”

He highlighted the developmental schemes started by the centre, he said, “We started Jal Jeevan Mission. Our aim is to ensure tap water connections to every home in India by 2024. In Tamil Nadu, more than 16 lakh tap water connections have been provided since the launch. In this year’s union budget, a series of economic corridors have been announced, and one of them is the Madurai-Kollam corridor. Funds allocated for railway infra projects in TN have increased by a record 238% compared to 2009.”

“Guided by the mantra of Sabka Saath, Sabka Vikas, Sabka Vishwas, the NDA government is working to bring a positive change in the lives of 130 crore Indians. For Tamil Nadu and especially Southern Tamil Nadu, we want to focus on Infrastructure, Irrigation, Investment,” he added.

Hitting out at Congress-DMK alliance, PM Shri Modi said, “DMK and Congress have no real agenda to talk about but they should control their lies because people are not foolish.”

In Kanyakumari, PM Shri Modi talked about the Rameshwaram-Dhanushkodi railway line which was damaged in 1964. He said, “50 long years but no one thought about repairing the railway line of Rameshwaram-Dhanushkodi. It was our Government that started work on creating a new railway line. Same for the Pamban Rail Bridge. Previous Govts. ignored it. We focussed on reconstructing it.”
PM Shri Modi thanked people of Tamil Nadu for attending the public meeting and urged voters to turn out in record numbers to vote for the NDA in upcoming elections.