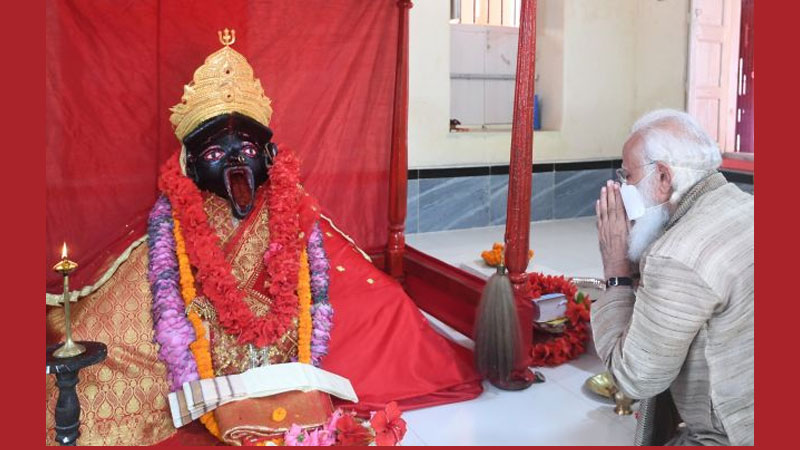 Prime Minister Shri Narendra Modi Started the second day of his two-day visit to Bangladesh by taking the blessings of Goddess Kali. The Prime Minister performed pooja at the Jeshoreshwari Kali Shaktipeeth in Satkhira, which is one of the 51 Shaktipeeths in the Puranic tradition. The Prime Minister also placed handmade mukut, made of silver with gold plating on Goddess kali. This mukut was handmade over three weeks by a local artisan. Extending a hand of friendship, the Prime Minister announced grant for construction of a community hall-cum cyclone shelter attached to the temple. This structure would be used by the devotees during the Annual Kali Pooja and Mela of the temple and would also be used by broader community of all faiths as a storm shelter and community facility.

The Prime Minister Shri Narendra Modi on 27 March sought blessings at the Hari Mandir in Orakandi and interacted with the descendants of revered Thakur family.
Prime Minister also addressed the representatives of the Matua community at Orakandi, from where Sri Sri Hari chand Thakur ji disseminated his pious message of social reforms. The Prime Minister underlined that both India and Bangladesh want to see the progress of the whole world, through their development and their progress. Both countries want stability, love and peace in place of instability, terror and unrest in the world. The same values were given to us by Sri Sri Hari Chand Thakur Ji. The Prime Minister underlined that today, India is moving forward with the mantra of ‘SabkaSaath, Sabka Vikas and Sabka Vishwas’, and Bangladesh is ‘ShohoJatri’ in it. At the same time, Bangladesh is presenting a strong example of development and change in front of the world and India is Bangladesh’s ‘ShohoJatri’ in these efforts.

The Prime Minister made several announcements including upgrading the existing middle school for girls at Orakandi and to set up a primary school as well. The Prime Minister also mentioned that every year a large number of people travel from India to Orakandi to participate in ‘BaruniSnan’ on occasion of the birth anniversary of Shri Shri Hari Chand Thakur and more efforts would be made to ease their travel.