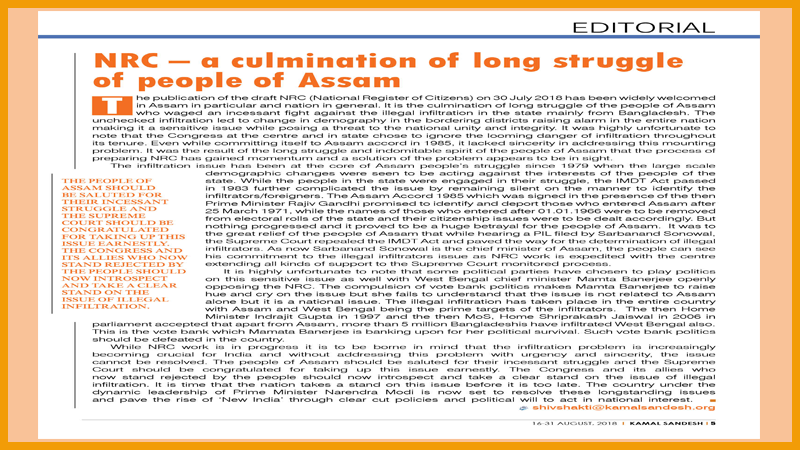 The publication of the draft NRC (National Register of Citizens) on 30 July 2018 has been widely welcomed in Assam in particular and nation in general. It is the culmination of long struggle of the people of Assam who waged an incessant fight against the illegal infiltration in the state mainly from Bangladesh. The unchecked infiltration led to change in demography in the bordering districts raising alarm in the entire nation making it a sensitive issue while posing a threat to the national unity and integrity. It was highly unfortunate to note that the Congress at the centre and in state chose to ignore the looming danger of infiltration throughout its tenure. Even while committing itself to Assam accord in 1985, it lacked sincerity in addressing this mounting problem. It was the result of the long struggle and indomitable spirit of the people of Assam that the process of preparing NRC has gained momentum and a solution of the problem appears to be in sight.

The infiltration issue has been at the core of Assam people’s struggle since 1979 when the large scale demographic changes were seen to be acting against the interests of the people of the state. While the people in the state were engaged in their struggle, the IMDT Act passed in 1983 further complicated the issue by remaining silent on the manner to identify the infiltrators/foreigners. The Assam Accord 1985 which was signed in the presence of the then Prime Minister Rajiv Gandhi promised to identify and deport those who entered Assam after 25 March 1971, while the names of those who entered after 01.01.1966 were to be removed from electoral rolls of the state and their citizenship issues were to be dealt accordingly. But nothing progressed and it proved to be a huge betrayal for the people of Assam. It was to the great relief of the people of Assam that while hearing a PIL filed by Sarbanand Sonowal, the Supreme Court repealed the IMDT Act and paved the way for the determination of illegal infiltrators. As now Sarbanand Sonowal is the chief minister of Assam, the people can see his commitment to the illegal infiltrators issue as NRC work is expedited with the centre extending all kinds of support to the Supreme Court monitored process.

It is highly unfortunate to note that some political parties have chosen to play politics on this sensitive issue as well with West Bengal chief minister Mamta Banerjee openly opposing the NRC. The compulsion of vote bank politics makes Mamta Banerjee to raise hue and cry on the issue but she fails to understand that the issue is not related to Assam alone but it is a national issue. The illegal infiltration has taken place in the entire country with Assam and West Bengal being the prime targets of the infiltrators. The then Home Minister Indrajit Gupta in 1997 and the then MoS, Home Shriprakash Jaiswal in 2006 in parliament accepted that apart from Assam, more than 5 million Bangladeshis have infiltrated West Bengal also. This is the vote bank which Mamata Banerjee is banking upon for her political survival. Such vote bank politics should be defeated in the country.

While NRC work is in progress it is to be borne in mind that the infiltration problem is increasingly becoming crucial for India and without addressing this problem with urgency and sincerity, the issue cannot be resolved. The people of Assam should be saluted for their incessant struggle and the Supreme Court should be congratulated for taking up this issue earnestly. The Congress and its allies who now stand rejected by the people should now introspect and take a clear stand on the issue of illegal infiltration. It is time that the nation takes a stand on this issue before it is too late. The country under the dynamic leadership of Prime Minister Narendra Modi is now set to resolve these longstanding issues and pave the rise of ‘New India’ through clear cut policies and political will to act in national interest.