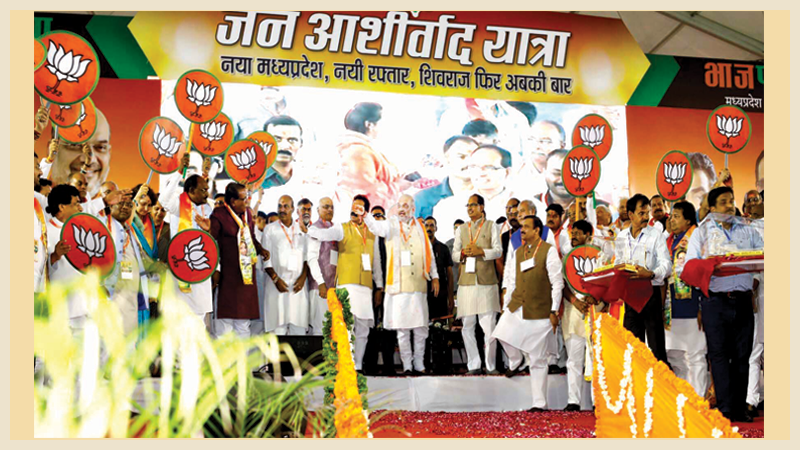 BJP National President Shri Amit Shah flagged off the ‘Jan Ashirwad Yatra’ and BJP’s election campaign in the temple city of Ujjain, Madhya Pradesh on July 14, 2018. Shri Amit Shah and CM Shri Shivraj Singh Chouhan, accompanied by BJP State President Shri Rakesh Singh, boarded a specially-designed chariot and stood on a hydraulic lift to greet the people after the flagging off. Earlier in the day, the BJP President and CM Shri Chouhan offered prayers at the Mahakaal Temple in Ujjain and sought the blessings of the Lord.

Addressing a large gathering on the occasion at Rajmata Vijayaraje Scindia stadium, Shri Shah said Shri Chouhan’s Jan Ashirwad Yatra; which will pass through all 230 constituencies to narrate his achievements will turn into a Vijay Yatra (victory procession) by the time it concludes. In the next 51 days, we will gather people’s blessings by travelling 11,000 km.

BJP is the only party where a three-time Chief Minister has the courage to face the people and give an account of his works, Shri Shah said, adding BJP has turned a “BIMARU state into a state of 10% growth”. What did Congress do during its 10-year rule? he asked, and made the gathering take a pledge to elect Shri Shivraj Singh Chouhan to power in the coming assembly elections and Shri Narendra Modi in 2019.

Criticizing the Congress, Shri Amit Shah said, “Congress dreams of forming a government with two kings and a wealthy man. But the Shivraj Singh government is formed by people’s support and blessings.”

Calling Madhya Pradesh the “tapobhoomi” of veteran BJP leaders such as Kushabhau Thakre and “Rajmata” Vajayaraje Scindia, BJP President Shri Amit Shah said that it is impossible for the Congress, or any other party to defeat the BJP in the state because the party’s roots run deeper than pattai.

Addressing on the occasion Shri Shivraj Singh Chouhan showered praise on PM Shri Narendra Modi for the contributions to the development of the state and said the war bugle has been sounded in Madhya Pradesh. Without naming Rahul Gandhi, he said, “One Bhaiyya had come forward some time ago, saying he will be the Prime Minister. He does not know if chilli grows upright or at an angle, and if onion grows above the ground or below it.”

Taking a dig at the opposition party, Shri Chouhan said that many in the Congress are hankering for the CM’s post. “Congress ke mitro, ye to batao Kamal Nath ke paise se rath ban bhi jaye to tumhare rath me bithaoge kise (A rath can be built with Kamal Nath’s money but friends in the Congress should tell who will sit on it),” he said.

The CM said the BJP and the Congress think differently. We are rooted in Indian ethos and traditions but the Congress is a slave of one family,’ he alleged. We have Shri Narendra Modi, do you have him ?

The CM plans to hold 705 public meetings and 500 road shows during the Yatra, which will end in Bhopal on 25 September, 2018 i.e. Pt. Deen Dayal Upadhyay’s birth anniversary. The CM informed that PM Shri Narendra Modi will also attend the concluding day event of the Yatra.