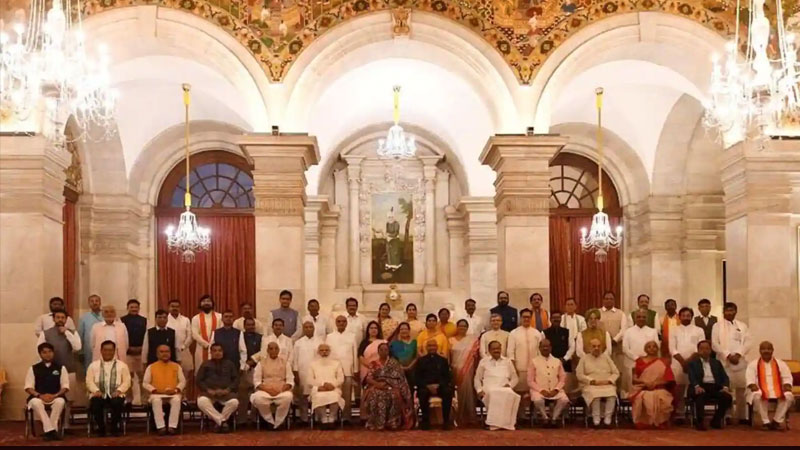 The first cabinet expansion by Prime Minister Shri Narendra Modi, after assuming charge for a second term in May 2019, is being hailed as socially most diverse and inclusive in the nation’s parliamentary history, in the pursuit of realising a ‘New India’. With this reset, the Prime Minister has infused young blood and has also given representation to various social groups, and regions to bring into governance the ‘collective voice of all of India’.

With the inclusion of 43 new faces in the Council of Ministers, of whom 15 took oath as Cabinet ministers and 28 as ministers of state, the overall strength of the Union Cabinet has risen to 78, including the Prime Minister.

The New Modi Cabinet 2.0 includes the vibrancy and color of India’s various communities and regions and is represented by almost all sections of the society. Therefore, it will be not an exaggeration if we call this new cabinet, a true reflection of India’s diversity that ensures representation for India’s poor, socially oppressed and backward, various states and regions, women, and youth.

Following the expansion, the Modi cabinet 2.0 has also become the government of many ‘Firsts’. This cabinet is also energized with the Youth power – to foster innovation and change. The outgoing Cabinet had an average age of 61 years, whereas the average age of the new cabinet is 58 years, in which, 14 ministers, including six in the cabinet, are below the age of 50 years.

In the same way, drawing from various sectors of the talent pool and expertise from various walks of life, the ministry includes 13 lawyers, six doctors, five engineers, seven former civil servants, seven PhDs, and three MBAs, with more than 68 having graduate degrees.

For a country to be empowered, the empowerment of women is extremely vital. Acknowledging this fact, Prime Minister Modi in the last seven years has ensured that women are given ample benefits, and equal and plentiful opportunities. Going by the tremendous amount of work done for the welfare of women, this period will undoubtedly be remembered as the most significant period for ‘Women Empowerment’ in the recent history of India. Further continuing this effort and shaping New India’s growth story, this is probably the first time in independent India where the Prime Minister included 7 women ministers, including two cabinet ministers, taking their overall strength to 11. This transition shows that India is transforming from women development to ‘women-led development’ under the dynamic leadership of Prime Minister Narendra Modi.

Similarly, for the first time a record 28 OBC Ministers, including five Cabinet Ministers, from across 15 States and 20 communities – Yadav, Kurmi, Jat, Gurjar, Khandayat, Bhandari, Bairagi, Tea Tribe, Thakor, Koli, Vokkaliga Tulu Gowda, Ezhava, Lodh, Agri, Vanjari, Meitei, Nat, Mallah–Nishad, Modh Teli and Darzi, with many of the communities getting a seat in the cabinet for the first time, are included in the government.

The Modi government has also included the experience of seniors – seasoned administrators and legislators to anchor and guide. 46 ministers have prior experience of being Ministers in the Central Government and 23 have been elected to Parliament for three or more terms – bringing in more than a decade of Parliamentary experience with them.

Like many firsts, the Modi government has also for the first time included faces from almost all the states– bringing the soul of Federalism into the Central government. At present the government has Ministers from 25 States + UTs. Five former CMs, 23 former Ministers in State Governments and 38 former MLAs – with State legislative experience will definitely enrich the government with their long experience in their respective States.

The induction of new faces in the cabinet has undoubtedly infused new energy, dynamism and determination in the government. Needless to say, the new look government is brimming with confidence to counter any challenge that comes in the way of India’s emergence as a world leader.

The new Cabinet for ‘New India’ has representation from across all the states and regions of the country representing the length and breadth of the country. With it Prime Minister Shri Narendra Modi has given a clear cut message that Social justice and Gender justice is no longer about symbolic or ceremonial presence but a more robust and result-oriented representation at crucial decision-making positions, that only can bring meaningful results. Therefore, with the inclusion of a sizeable number of SCs, STs and OBCs, and ample number of women this will be the most socially diverse and inclusive council of ministers in the political history of the country.

By making the weaker sections of our society decision makers and stakeholders in the affairs of the nation, Prime Minister Narendra Modi has heralded a refreshing and historic change for the overall development of these sections to realize the dream of the founding fathers of the nation.