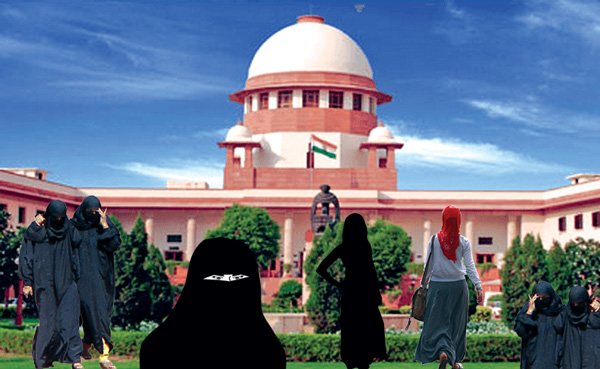 The Supreme Court on August 22 stroke down anti-woman and inhuman Islamic practice of instant divorce by merely pronouncing three times ‘talaq’ word in one go as arbitrary and unconstitutional, in a landmark verdict for gender justice that will stop Muslim men breaking a marriage on a whim. The judgment paves way for empowerment of women. The Supreme Court delivered the verdict three of the five all-male judges on the case said the practice of saying “talaq”, or divorce, three times in one go – sometimes even over email and WhatsApp – violated women’s right to equality and was not integral to Islam. The verdict was announced by Three judges. Five-judge bench headed by Chief Justice of India JS Keha. Out of five three have termed the Triple Talaq as unconstitutional and set it aside.

“This is a historic day for Muslim women. No Muslim women will have to go through the harassment that I suffered,” Shayara Bano, a 35-year-old divorced Muslim woman whose petition two years ago helped end instant talaq, told to the media.

BJP National President Shri Amit Shah appreciated the historical decision decision of Supreme Court of banning triple Talaq. “A new era of self respect and equality has begun in lives of millions of Muslim women today. BJP welcomes the decision and sees it as a major step towards emergence of a new India.”

Shri Shah said “This is the beginning of New India,” said Mr Shah, also stating, “This judgement is not about anyone’s victory or defeat. This is the victory of the basic constitutional rights of Muslim women and their right to live with equality.”

He praised the efforts of Prime Minister Narendra Modi and his government for effectively presenting the case of Muslim women in the top court.

“Judgement of the Hon’ble SC on Triple Talaq is historic. It grants equality to Muslim women and is a powerful measure for women empowerment”.
— Narendra Modi, Prime Minister

“I welcome the historic decision of the Supreme Court. This verdict is not defeat or victory of anybody. Rather, it is victory of right of equality and constitutional fundamental rights of the Muslim women”.