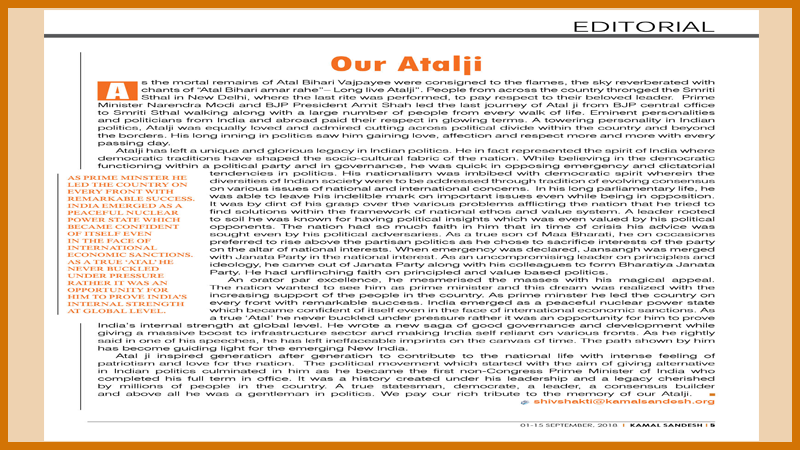 As the mortal remains of Atal Bihari Vajpayee were consigned to the flames, the sky reverberated with chants of “Atal Bihari amar rahe”– Long live Atalji”. People from across the country thronged the Smriti Sthal in New Delhi, where the last rite was performed, to pay respect to their beloved leader. Prime Minister Narendra Modi and BJP President Amit Shah led the last journey of Atal ji from BJP central office to Smriti Sthal walking along with a large number of people from every walk of life. Eminent personalities and politicians from India and abroad paid their respect in glowing terms. A towering personality in Indian politics, Atalji was equally loved and admired cutting across political divide within the country and beyond the borders. His long inning in politics saw him gaining love, affection and respect more and more with every passing day.

Atal ji inspired generation after generation to contribute to the national life with intense feeling of patriotism and love for the nation. The political movement which started with the aim of giving alternative in Indian politics culminated in him as he became the first non-Congress Prime Minister of India who completed his full term in office. It was a history created under his leadership and a legacy cherished by millions of people in the country. A true statesman, democrate, a leader, a consensus builder and above all he was a gentleman in politics. We pay our rich tribute to the memory of our Atalji.