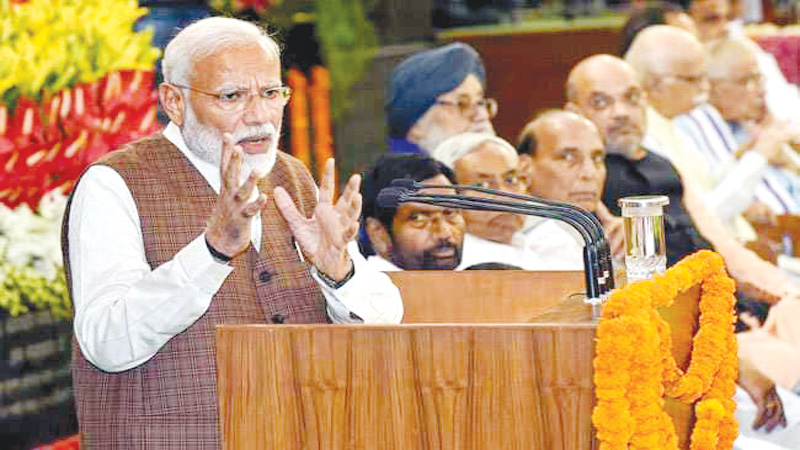 Amid thunderous applause and chanting of ‘Bharat Mata Ki Jai’ and Modi…Modi…in the central hall of Parliament, 353 newly elected lawmakers on 25 May, 2019 chose Prime Minister Shri Narendra Modi as the leader of the BJP’s parliamentary Party and the NDA.

Before addressing the NDA members of the 17th Lok Sabha, PM Shri Narendra Modi touched the feet of party veterans Shri LK Advani and Dr. Murli Manohar Joshi and bowed before a copy of the Constitution of India.

Describing the 2019 elections as a watershed moment that left the world awestruck because of its scale and magnitude, PM Shri Modi stressed the need to inculcate the spirit of service in an inclusive manner. The polls helped break walls and joined hearts, he said.

Describing the electoral campaign as a pilgrimage for him and crediting crores of people for keeping faith in his spirit to serve he said, “2019 elections were very different in one respect. The BJP and Modi were not fighting elections but the public was fighting elections.”

In a clear message to the NDA allies that their importance was not going to diminish despite the BJP getting massive mandate with 303 MPs, Shri Modi said, “I am one among you, equal to you and we have to work together. This is the power of NDA.”
He said the Gathbandhan or politics of alliance is there to stay and needs to be the part of principle of governance and if possible, be extended further. “To develop and achieve its full potential, the country picks up speed on the two tracks of – NARA – national ambition and regional aspiration. This should be our ‘Nara’ or what you call slogan,” he said, adding that the most important lubricant of NDA is trust that keeps it strong.

In a message that could go a long way to control vigilante groups and lower the apprehensions among minorities, he said, “We are with those who war with us and also with those who will be with us. Nobody is alien to us no. Those who vote for us are ours and those who oppose us strongly are also ours.”

Making himself more specific, he said, “It is unfortunate that like the poor, minorities of this country have also been deceived and fed fear. It would have been better if their education and health were kept as priorities. In 2019, I expect from you to break this deception in. We have to win their faith.”

Shri Modi also cautioned the first time MPs and old motor mouths not to fall into the trap of touts in Delhi as well as not to do loose talk before the media, especially television, as that has often dented the party’s image.

“Advaniji kehte the ki ye chhapas and dikhaas ka rog ek prakar ka nashaa hota hai. Issey bachkar rehna hai. (Advaniji used to say that the disease to see the name in print and on television is a kind of dope. And one should keep away from it,” Shri Modi said.

Shri Modi said country’s minorities have been deceived and fed fear for years. He urged the party MPs to shatter this deception.